“From Colorado Springs to NYC” with Aaron Pfenning 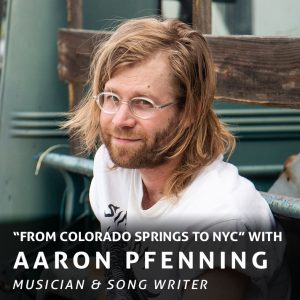 Aaron Pfenning is a musician who splits his time between Colorado Springs and New York City. He co-founded the band Chairlift and currently records music under the
name Rewards.

TJ Neathery: Looking through your “resume,” I see that you’ve toured and
collaborated with We are Scientists, MGMT, Blood Orange, Solange, The Killers,
Phoenix…

So as an artist, and coming from a creative writing background because most
creative writers are more individualistic than a band where you have to work with
three or five other people – how do you see that coming through in your life as an
artist? You’re doing more solo stuff but also a lot of collaborations.

AP: I love to collaborate. It’s a big part of things for me. But I think my true divine alignment is to work on my own, which is why I dislike writing groups. [Creative writing is] what I thought I was going to do. You can just work by yourself. All your thoughts in one place. You don’t have to get approval from anyone else unless you have an editor. But [collaboration has] helped me in a lot of ways because certainly I’m a better musician, obviously. I’m not a great musician. I think my strengths are writing.

AP: Yeah, just song writing. And generally, the way it works is that I’ll present an idea and then a better musician than me will record it.

TN: A lot of people I talk to don’t have the “living options” between New York and Colorado Springs, but how does this city, this environment, affect your creativity especially along the lines of collaboration and being an individual artist? 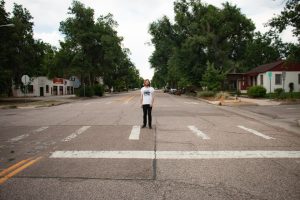 niece. She’s three. And she’s the perfect brainstorming partner. It’s just like ideas constantly. Or I can tell her an idea of mine and she’s like, “Yeah, that’s cool,” but then she goes off on a tangent. And so yeah, she’s my collaborator here. And being in New York I’m never by myself. It’s always someone or people around. It’s a completely different environment so here it’s a really great chance for me to actually write things I wouldn’t work on like short stories and music. I write songs everyday. I’m more productive, I think.

TN: How do you think bouncing ideas off your niece is different – maybe even more productive or touches you as an artist in a different way – than collaborating with Blood Orange? They’re very different.

AP: Everything with my niece is less structured. But I voice memo to record almost everything that we do because she’s constantly stringing simple things together that I wouldn’t think of. And I’m like, “Oh, wow, we can use that!” And my real goal with her is to write a kids book together. I’ve got all the characters down now and so now it’s about coming up with a story and just working on it with her, like, “Do you think this is a good story arc?” 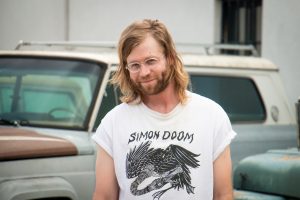 TN: You’ve brought up “separating” a couple times. Your creative writing and music are separated, these different aspects of the creative process are separated, and geographically, Colorado Springs is very different from New York City. Do you like compartmentalizing things?

AP: No, I think it helps sometimes to write things down in lists and notes and stuff. You know, my idea of living seasonally is something I’ve never thought about before until recently.

TN: Your life just happened to be seasonal and you thought, “Oh, this is good.”

AP: I realized that I could do that. I could move in seasons, which is kind of a normal human thing… Do you see yourself being in Colorado Springs for a while?

TN: So far, yeah. Because even as a fiction writer it’s good to meet people in the big cities to get those contacts, but I don’t need to be – it’s not as though I need to be on a set someplace in LA.

AP: You can meet people on Craigslist, too. This is how I met MGMT. It was also right when we moved to New York. So, this rehearsal space had everything set up and we couldn’t afford it on our own so we needed to share it with someone. And I put an ad on Craigslist, “Looking for space,” you know, mates to share the space with. Then Andrew, the singer from MGMT was the first one to call me. He called me and was like, “Can we look at the space?” and so him and Ben, his bandmate, came over – I didn’t know who they were. They had just moved to New York. And they came over and we hung out and they were like, “Yeah, well, we don’t have any instruments, but we’re about to sign to Columbia.” And we thought, “That’s a major label. Really? You guys are going to sign with Columbia?” I thought they were just joking. And they didn’t have any instruments so we thought, “Well this seems perfect.” So, we shared the space with them… They never used it, but they paid their rent on time. They were the perfect roommates. Then I started hanging out with them, and they eventually took us on tour, and we also signed to Columbia too.

I’d also like to mention “Plenty Of Girls In The Sea” is one of the most heartbreaking
songs ever written, by MGMT. Am I allowed to endorse that song on here?

Aaron Pfenning has solo music out under the name Rewards with a new record coming out within the next year or so. In the meantime, take a listen to Rewards on Spotify!

TJ Neathery
TJ Neathery spent his childhood in Albania, adolescence in Texas, but now lives and writes in Colorado Springs, CO. He describes himself first and foremost as a Christian who is a writer. He received his MFA in fiction from Oregon State and enjoys writing short stories and novels. Recently, he completed his first novel manuscript, Gracie Got Us Down to Texas, about an alt. rock band trying to break onto the Austin, TX music scene. He has also published stories in various lit mags. One of his great passions is music. Since high school he's collected over 350 CDs and he enjoys playing his vinyl collection on a hot pink Victrola. With all these artistic interests, it just makes sense that he connects with local artists through the Artist of the Week feature.
Tagged: aaron pfenningartist of the weekchildrens' bookscolorado springsColumbiacreative writingMGMTnieceNYCRewardssong lyrics
OnColoradoSprings.com is a locally-owned and operated directory and information guide for Colorado Springs Colorado
Discover the best of Colorado Springs shopping, restaurants, night life, breweries, events, business, outdoors, fun, local life, real estate, transportation, jobs, and schools.
Looking for what to do in Colorado Springs? OnColoradoSprings.com has columnists, and bloggers to keep you up to date on the best of Colorado Springs, Colorado.