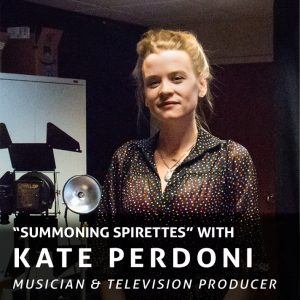 Kate Perdoni is a musician, TV producer, and influencer in the Colorado Springs art community. Her band, Spirettes is made up of herself (guitar/vocals), Kellie Palmblad, Emily Gould, Lisa Show and Desi Garcia.

When I first set up this interview, I planned to talk to Kate Perdoni about her band, Spirettes, an all-female rock lineup owning a sound that exists between atmospheric alternative and noise rock. Bands like The Breeders, Yo La Tengo, Sonic Youth, and Sleater Kinney come to mind. If you enjoy those bands, you’ll dig Spirettes. I do, and so I was excited for my conversation with Perdoni. I’d soon realize, however, that music makes up only a sliver of Perdoni’s artistic interests.

We meet in Perdoni’s studio. But it’s not a music studio. It’s the Colorado Springs PBS television studio. Because besides playing in Spirettes, Perdoni is a producer for Rocky Mountain PBS. Her office is decked out in monitors and microphones. I ask her what she’s working on and she immediately comes alive. She’s producing a documentary about Fannie Mae Duncan, an African American woman and Colorado Springs legend who ran an influential jazz club during segregation era America. After telling me all about the project and the history, Perdoni apologizes for rambling. But I shake my head and say, “No, no!” I’m hooked, I say. I want to see this documentary and I think it can’t be released soon enough.

I come to find that Perdoni speaks about all her projects with this same energy and enthusiasm. And I suppose if you’re going to be a TV producer, musician, Arts Council executive director (up until recently), and mother, you’ve got to have a certain, innate level of energetic passion.

I ask about Spirettes’ influences and origins – what Perdoni is going for with their sound. But maybe I’m complicating the issue because Perdoni answers by saying, “I just play guitar and sing and write songs — so it just sounds like 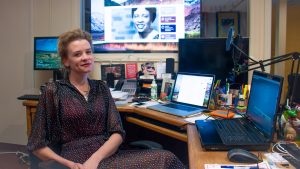 whatever it sounds like! It was first just Kellie, Emily, and myself, since we were a three-piece for a while before Lisa and Desi came on. And we really just wanted to just see what it was. We started jamming, and that’s what it sounded like.”

Hearing this, I sense that Spirettes exists for the love of the thing itself. The “thing” being music. And “each other,” the camaraderie that comes from making art with friends and sharing that art with a supportive community. I sense a kid of authenticity.

Perdoni says, “I think because all of us are in so many other bands and getting involved with so many other projects – you know, Desi and I have been really close friends for over a decade and then Kellie and Lisa in the band have been really close friends for over a decade – so we have these super deep, long-lasting friendships on top of this awesome music-making thing. So because we’ve all known each other for so long and other people have known us in other bands, I think it’s relatively easy to attract fans and friends to care. People are so supportive. It’s seriously ridiculous! And it happened right away – I don’t know if it’s the all-women thing or just the positive vibe we put out in the world. And we’re having a lot of fun. We’re playing some great festivals this summer.”

For Perdoni, the artistic life isn’t grueling. Tiring, sure, but not all bands can say they’re “having a lot of fun.” We talk more about being a “local” band and how that affects Spirettes’ morale. Perdoni is the new kid of the group. She moved to Colorado Springs about four years ago, but the others are long-timers.

“Myself, I’ve only being here for a certain number of years, and everybody else in my band was essentially born and raised in Colorado,” Perdoni says, “and so I see so much pride – like Kellie for example, she’s lived in Colorado Springs for the bulk of her life – and I can see all of her old-school friends who she used to be crazy with back in the day, they come to all her shows and they’re so full of pride for her that she’s still making music and the support is not just the support of friends or fans, but it’s like this all-encompassing support. We try to emulate that in our band. All of us are involved in many different creative outlets – Desi is a potter, I write and make television, Kellie writes, Lisa is a creative vortex in and of herself… We all do so much, and we try to support each other in all our endeavors outside of music as well. And I totally feel that vibe coming back from the community.”

And that, I think, is the magic of the Colorado Springs artist community. It’s fresh. It’s growing. It has energy. And it supports its own.

Check out Spirettes’ music on Spotify or Bandcamp.

And keep an eye out for her Fannie Mae Duncan documentary set to be released in 2019.

TJ Neathery
TJ Neathery spent his childhood in Albania, adolescence in Texas, but now lives and writes in Colorado Springs, CO. He describes himself first and foremost as a Christian who is a writer. He received his MFA in fiction from Oregon State and enjoys writing short stories and novels. Recently, he completed his first novel manuscript, Gracie Got Us Down to Texas, about an alt. rock band trying to break onto the Austin, TX music scene. He has also published stories in various lit mags. One of his great passions is music. Since high school he's collected over 350 CDs and he enjoys playing his vinyl collection on a hot pink Victrola. With all these artistic interests, it just makes sense that he connects with local artists through the Artist of the Week feature.
Tagged: artist of the weekcolorado srpingsKate PerdoniRocky Mountain PBSSpirettes
OnColoradoSprings.com is a locally-owned and operated directory and information guide for Colorado Springs Colorado
Discover the best of Colorado Springs shopping, restaurants, night life, breweries, events, business, outdoors, fun, local life, real estate, transportation, jobs, and schools.
Looking for what to do in Colorado Springs? OnColoradoSprings.com has columnists, and bloggers to keep you up to date on the best of Colorado Springs, Colorado.