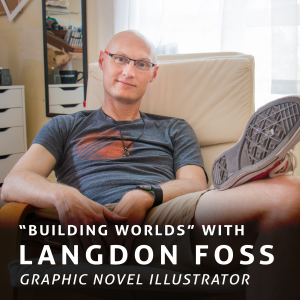 Langdon Foss is a graphic novel illustrator who works from his studio in Old Colorado City, CO.

Langdon Foss is a guy with ideas. He’s a conversationalist. He makes me an espresso and I settle into the sofa. Our “interview,” which I’ve cut down quite a bit, creeps over the hour mark. It doesn’t drag. We just enjoy letting the conversation go where it leads.

Independent. Individual. These describe both Foss and the ideas we toss back and forth. Foss claims that he’s never worked for a company that’s required him to attend a staff retreat. In fact, he’s spent much of his artistic career freelancing.

“I’ve been a freelancer and that’s entailed entirely working for contract… I’ve had friends who have moved to the big places and have worked in software companies or computer game companies as designers, and definitely working in the bullpen of artists in this big room with desks and this creative energy flowing. I’ve never really had that experience. The closest I get to that in this industry is being on Twitter and that parallels to 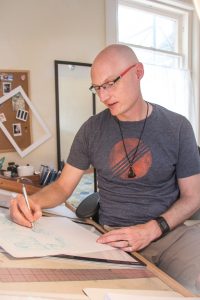 It might sound like Foss is unhappy working from Colorado Springs – fewer opportunities and less collaboration – but that’s not the case at all.

“So, Colorado Springs, I’ve lived here since college and I met my wife at college at Colorado College. I grew up in the mountains and I lived in Eagle up near Vail. Yes, so I love Colorado. It feels like home. You know, I’ve lived in Japan and I’ve lived in Pennsylvania – a few other places – and this feels like home. It feels like it has everything I need… like mountains. I can drive ten minutes and be completely alone… It works for me and I’m really grateful that I get to work remotely like this.”

So, Foss freelances, but what does he work on? What is he doing now? What projects is he excited about? That’s what I want to know. 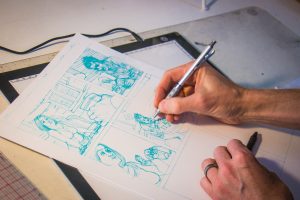 “I’m excited about the book I’m doing right now,” he says. “It’s called The Veiled Heart and it’s probably going to be a 160 page graphic novel, and it’s written by a guy and his creative partner whose work I have admired for a long time. His name is J.H. Williams… It’s a futuristic noir story taking place in an alien – it’s on earth but it’s in a future culture that’s sort of developed from Eastern cultures after a global collapse.

“So, there’s a lot of world building. I’m really excited about world building. Designing consistent architectural styles and fashion styles and trying to create a world that, to me, that is consistent and makes sense. So, there’ll be design elements in the architecture that serves the people, and then when the story focuses on the people then they behave in a way that’s consistent with that. J.H. wanted me to draw this because I love that stuff.”

I think about world building and how it relates to the Colorado Springs arts scene. Artists and fans are in some ways responsible for “world building,” for creating the scene they want to participate in. You’ve either got to create or support the art you love. And Foss says Colorado Springs has been good to him as a creator.

“It does feel like a small down, you know from downtown to west side, but the comics scene is small enough that there’s 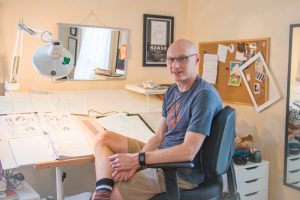 a few comic book stores that reach out pretty regularly for free comic book day or other things like that, and they’ve just been really good to me. When I did my breakout book – this is the first book I did that anybody really paid attention to, Get Jiro! – it was Anthony Bourdain’s, the chef. It was his graphic novel about food culture and his love for samurai western movies. So, I did that and the community was just so good to me. The Colorado Springs Independent put me on the cover once and did a great article about me…

“Escape Velocity comics downtown have been super good to me. They’re my comic book store of choice and they offered me my first signing here and have promoted events with me headlining. I love being part of the community. And I think that’s always been a requirement for me as I want to accept enough work that affects the community, that makes me feel my roots, you want to feel a connection to the community. I’ve been here long enough. I know people here. KaPow Comics & Coffee, they’re a great store.

“So yeah, that’s really important. I don’t just want to be shut away in my studio drawing things for people I’ll never really meet and for a readership that might only reach out to me at conventions because that’s not really real, and I think our little primate brains need something real.”

And keep an eye out for his newest illustrations once The Veiled Heart hits bookstore shelves.

TJ Neathery
TJ Neathery spent his childhood in Albania, adolescence in Texas, but now lives and writes in Colorado Springs, CO. He describes himself first and foremost as a Christian who is a writer. He received his MFA in fiction from Oregon State and enjoys writing short stories and novels. Recently, he completed his first novel manuscript, Gracie Got Us Down to Texas, about an alt. rock band trying to break onto the Austin, TX music scene. He has also published stories in various lit mags. One of his great passions is music. Since high school he's collected over 350 CDs and he enjoys playing his vinyl collection on a hot pink Victrola. With all these artistic interests, it just makes sense that he connects with local artists through the Artist of the Week feature.
Tagged: artist of the weekcolorado collegecolorado springsLangdon fossThe Veiled Heart
OnColoradoSprings.com is a locally-owned and operated directory and information guide for Colorado Springs Colorado
Discover the best of Colorado Springs shopping, restaurants, night life, breweries, events, business, outdoors, fun, local life, real estate, transportation, jobs, and schools.
Looking for what to do in Colorado Springs? OnColoradoSprings.com has columnists, and bloggers to keep you up to date on the best of Colorado Springs, Colorado.