Home » Articles » Motivation » Monday Motivation – How to get motivated when you feel beat up?

Monday Motivation – How to get motivated when you feel beat up? 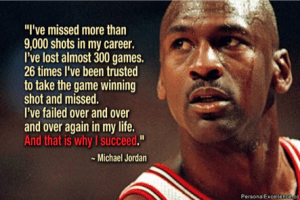 Those of you who know me, know that I am a sports nut.  Having been an elite athlete myself, I appreciate all aspects of competition from the physical exertion to the mental component to the coaching tactics.  I have never competed in a football or a soccer game, but I still get very emotionally involved as a spectator.  Over the past three days, my favorite two football teams lost (CU Buffs and Broncos) and one of my favorite soccer teams lost (CU Women’s soccer) and one of my favorite soccer teams won!  (Grace College Women’s Team)

As a participant and a fan, we ride the ups and downs of wins and losses.  I’m writing this article on a Sunday evening after seeing the Broncos lose to the Houston Texans by 2 points after missing a field goal in the last 3 seconds.  Ouch!  How different the emotions could have been had that field goal been made?  It would have been a totally different story.  Yet, instead the heaviness of the Broncos sixth loss of the season infiltrates all the media outlets as I type. The CU Buffs football team had their 4th straight loss on Friday night after starting the season at 5-0, which was the best season since 1998.   The big question is:  How do you find motivation in the midst of such frustration and disappointment?

It’s Monday morning and it’s back to the “chalkboard.”  It is in these challenges that exist the greatest opportunity for growth and lessons.  In these moments true winners are born.  I know that sounds cliché and trust me, I love to win.  I agree that winning is much more fun than learning life’s tough lessons.  However, without growth, what is the point of all the effort?   There is a saying, which I believe is 100% accurate:  If you keep doing what you have always done, you will keep getting the results you have always gotten.  What can you change in an attempt to create different results? 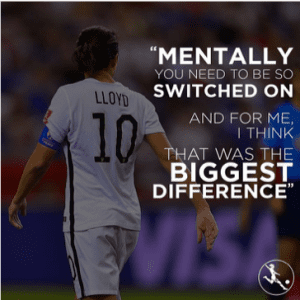 First of all, you can only change things within yourself.   You do not have the power to change anyone else or the external circumstances in your life.  You can only change YOU.  The only way you can actually lose, is to quit.  One of my favorite sports facts is that Michael Jordan did not make his high school varsity basketball team his sophomore year of high school.

Another favorite athlete story is Carli Lloyd, who is one of the most accomplished female soccer players in the world.  She was cut from the U21 national team because she wasn’t good enough.  She was ready to quit the sport until she met Coach James Galanis, who changed her game by helping her with her mindset.   When Galanis originally met Lloyd he said, “I discovered a player who was full of excuses as to why she couldn’t make it to the next level…She worried about things that she had absolutely no control over.” When speaking about his initial coaching with her he said, “I just told her, ‘The first thing you need to change is your mind.’”

I see this over and over again in sports:  athletes who have the physical ability but get defeated by their mindset. Often physical talent is relatively equal among players, it is the mentality and the resiliency that sets the winners apart from the average players.

Back to today’s question:  how do you pick yourself up and find the motivation to keep going?  First of all, you take responsibility for your own actions, mindset, and responses to the circumstances around you.  If you are blaming other people or events for what is wrong in your life, then you probably will end up quitting, which is the ultimate loss.  Start with yourself.

The second thing is to begin with the end in mind.  What does this mean? Look into the future of what you want to create.  What do you want your life to look like in a year, or 3 years?  Build from there.  This moment in time is just a small section of the journey called life.  What changes do you need to make now to get you to where you want to go?   Do you even know what it is that you want in your life?

In the big scheme of things this is one game, or one season.  Who are you becoming in the process?  What is your contribution to this world?  Whatever circumstances you are currently facing are temporary.  Today is a new day…make it count! 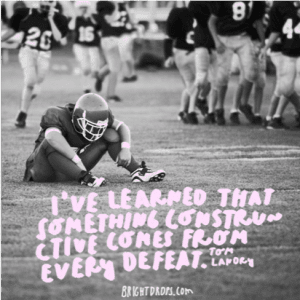 Here is a recap and my challenge to you for this week:
1) Take Responsibility of your own actions.

2) Start with the end in mind…think “backwards” from the result you want.

3) Give back…do something for someone else. Your purpose on this planet is greater than winning in your sport or job.

4) Express Gratitude – the act of gratitude will always elevate your state and put you in a better place to get the things done that you want to do!

Have a great week!  Go Buffs and Lady Lancers!  (The Broncos are off this week)

Julie Dale
Julie Dale is an author, certified coach, motivational speaker and former world-class athlete. She embraces life to fullest.  Ever since she was a child she has always pursued big dreams with enthusiasm and determination. In high school she was a state champion cross country runner, and later in life she went on to be a professional cyclist competing all over the world for Team Saturn and the US National Team.  She finished 6th in the 2000 Olympic Trials and represented the USA in the Winter World Triathlon championship in Norway in 2006.  She also competed in elite adventure races throughout the US. Her competitive drive has served her well in the business and the entrepreneurial world as well.  She has trained and coached sales people to triple their previous sales records. In 2014 she began creating wealth in real estate investing by doing fix and flips, wholesale deals and creative acquisitions.  As a successful real estate investor, she coaches individuals who want to pursue investing as a source for passive income. A common thread throughout her life has been a love for people and encouraging those around her to live their best lives.  People often come to her with questions of how they can do what she does. She is always happy to share her insights and lessons along the way, while embracing her own ongoing journey of learning and growth. With years of life experience she has recently launched her coaching business and is working with individuals and teams to live a life they truly love.   Aside from being a mom, this work is the most fulfilling work Julie has ever done. There is nothing better than seeing people come to life and experience the joy and abundance that she believes is everyone’s birthright.
Tagged: carlilloydgracewsoccerlancerupmetrosamplermichaeljordanmotivationneverquitskobuffssuccess
OnColoradoSprings.com is a locally-owned and operated directory and information guide for Colorado Springs Colorado
Discover the best of Colorado Springs shopping, restaurants, night life, breweries, events, business, outdoors, fun, local life, real estate, transportation, jobs, and schools.
Looking for what to do in Colorado Springs? OnColoradoSprings.com has columnists, and bloggers to keep you up to date on the best of Colorado Springs, Colorado.