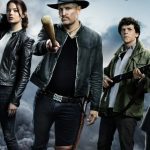 If you went back in time and told the younger version of myself that a) there would be a gigantically popular TV series about the zombie apocalypse and b) that I would have tapped out on it after the third season, Younger Me would have immediately called 911 and had you arrested with extreme prejudice. Consider that The Walking Dead began as an independent comic book. Now, it’s getting started on its 10th season, has one current and one upcoming spinoff series, and there’s talk about releasing three connected theatrical films. To paraphrase a former Vice President, The Walking Dead is a big... Read More