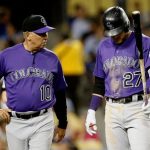 The Colorado Rockies showed up in Los Angeles with swagger, momentum, and a half-game lead in the division playoff race.  After a Dodger sweep, a Trevor Story injury, and a Nolan Arenado slump, the Rockies continue to ask the question, why can’t we beat the Dodgers?  Here are seven major reasons. Depth – When the Dodgers lost shortstop Corey Seager to injury early in the season, the former Rookie-of-the-Year and two-time All-Star was replaced by Baltimore’s Manny Machado (37 HRs/102 RBIs). When Trevor Story had to remove himself against the Dodgers last Monday, he was replaced by Garret... Read More