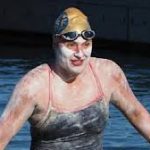 Sarah Thomas, a 37-year-old breast cancer survivor, has accomplished a first by swimming the English Channel four times in a row, a feat that took 54 hours to accomplish. The swim was due to be about 80 miles, but because of strong tides, Thomas ended up swimming closer to 130 miles. Thomas was cheered on by the crowd as she finished, and she was given champagne and chocolate to celebrate. She said that she felt slightly sick after spending so much time in the water, but other than that she was fine. Thomas said, “I just can’t believe we did it. I’m really just pretty numb. There... Read More