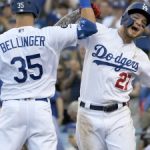 It’s barely August. There are more than fifty games left in the regular season, and Colorado Rockies fans have seemed to have given up. Where is your faith? Where is your belief? Colorado has tasted the playoffs two years in-a-row and you sit there like the season is already over. Yes, the Rockies are nine games under .500, more than 20 games behind the Dodgers, and sit in last place in the NL West, but that doesn’t mean it’s over. Just because the Rockies won only 6 out of 24 games in July and gave up 100 runs over a ten-game-stretch from July 13th to July 23rd doesn’t mean it’s over. Sure,... Read More