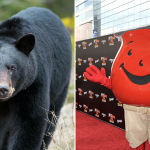 A bear made its way into a home in Estes Park on Friday, then was spooked while in the house. Police said that the bear “forcibly breached a hole in the wall like the ‘Kool-Aid Man’ and made [its] escape.” This is not the first bear break-in in Estes this year, with 35 bears breaking into vehicles. Wildlife officials say that there was not food in the vehicles, but the bears are used to there being food in cars, so they check just in case. It is likely that the bear burglar in question broke into the house in the search of food as well. The police said in a statement on... Read More