The Denver Nuggets – Now What? 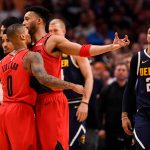 The Denver Nuggets’ outstanding season ended prematurely last weekend as CJ McCollum poured in 37 points for the Portland Trailblazers, the Nuggets went cold and missed their last 15 three-point shots, and the Pepsi Center fans left the arena with a rare homecourt loss in a pivotal game seven finale. The defeat was disappointing, but the future looks bright as Denver’s young core of Nikola Jokic (24), Jamal Murray (22), and Gary Harris Jr. (24) showed that the team is formidable and on the rise. But if you’re thinking that the Nuggets should simply work on their shooting this summer, practice... Read More