Watch the “Great Mattress Migration of 2019” 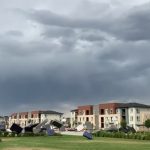 Mattresses that were set up for a movie night in Colorado were suddenly taken away by a strong wind shortly before a storm. Video footage shows that some of the mattresses were blown into a nearby outdoor pool. Robert Manes, who shot the video, told the Denver Post, “Although we felt really bad for the event people, we thought it was absolutely hilarious.” The scene lasted for more than 30 minutes and approximately 100 mattresses flew away during the migration.  Read More