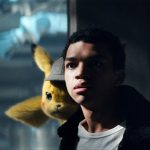 In order to understand Pokémon: Detective Pikachu, you need to understand a couple of startling facts. First, let’s explain what Pokémon actually is. Created in 1995, this Japanese franchise concerns itself with a world overflowing with what are known a   s pocket monsters. Folks known as trainers must capture different species of Pokémon, which are weird critters that have fantastic powers. From there, they do battle with other trainers to become a champion.* You probably know this, but Pokémon is massive. 807 distinct species of the titular beastie have been created so far, and they appear... Read More