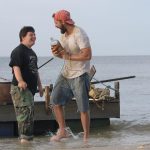 To say that Shia LaBeouf has had an unpredictable career would be an understatement. Consider that, at ten years old, he attempted to launch a stand-up comedy career. From there, he became a Disney Channel wunderkind, and younger audiences were the first ones to witness his talent. I can hear between guffaws, many of you saying, “Talent?! Pshaw! He was in the godawful Transformers movies! He was in the only terrible Indiana Jones film! He went crazy in public! Maybe lay off sniffing glue before you write your reviews, okay?” With the exception of the sniffing glue thing, all of that is true. Strip... Read More