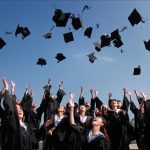 CU Boulder and Denver, UNC, and DU, are all among Forbes’ list of top colleges in the U.S. for 2019. According to Forbes, the list is based on the top academics, career success and lowest debt. There were 650 schools in the ranking, meaning that only 15% of schools nationwide were included. Colorado schools ranked as such: United States Air Force Academy – 43 Colorado College – 92 Colorado School of Mines – 94 University of Denver – 140 University of Colorado, Boulder – 146 Colorado State University, Fort Collins – 223 Regis University – 298 University... Read More