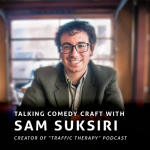 Sam Suksiri is the creator of the hilarious “Traffic Therapy” sketch podcast I want a guy like Sam Suksiri to write my jokes. When I meet Suksiri, he’s sitting at a table in a smart, gray blazer, sipping a cold brew coffee. In an artist’s way, his hair’s not exactly combed. He’s sociable, and we soon get to talking. He studied television writing in grad school. That was until a professor pulled him aside and said something along the lines of, “It seems like you’re here to write comedy. This is a TV screenwriting program, and you might end up a little disappointed.” So Suksiri... Read More