Broncos vs Raiders: It Could Be All We Need to See 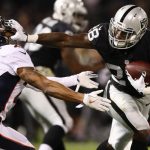 After a 6-10 season, the Denver Broncos and John Elway knew they had to make some changes. The team said goodbye to Case Keenum, the coaching staff, Bradley Roby, Matt Paradis, and others. In came an entire new coaching staff, a high-priced secondary, and a Super Bowl winning quarterback in Joe Flacco. The question is whether all the movement will lead to victories, or do the Broncos revert to the same team (with another new quarterback) that has gone 20-28 since winning the Super Bowl back in 2015? Generally, one game does not a season make. But in this case, with an opening-season matchup against... Read More