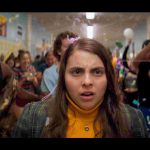 In our own ways, we all have power. From petitions, to marches, to your own creativity, everyone has the power to push the needle in a positive direction. Film has a power that’s mighty, and one of my favorite things is championing a film, getting absolutely blissed-out, and transforming into a cinematic evangelist. The right film can open eyes, change a life, and make the unbearable a little easier to bear. But what if you had the power to prevent a great film from becoming a train wreck? Office Space and Clue are some of the most beloved comedies ever made. They were also disasters at the box... Read More