One minute you’re riding a motorized bike along the Newport Pier. The sun is kissing your skin and the wind is whipping past your smiling face. The salty air is filling your nostrils and you can feel your entire body let out a sigh of pure unencumbered bliss.

The next minute you’re sitting in an autobody shop listening to a mechanic tell you that you’re going to need a new car engine. Your palms get sweaty, and your eyelids flutter subconsciously. A wave of nausea passes over you as you enter into that slightly out-of-body state of being.

Okay, this is not a normal day by anyone’s standards. Except mine. Because, yes, this is my kind of day.

When you’re living life on your own terms and using your car to travel to every possible end of the earth (or just the United States), you will be confronted with days that are characterized by simultaneous joy and defeat. You will undoubtedly experience high highs and low lows because, let’s face it, one does not exist without the other.

I set out on my first major road trip with the Airstream last week. I took off from Denver and strategically planned a stop in Zion National Park before meeting up with my dad in Newport Beach and one of my best friends in San Diego. Zion National Park was undoubtedly on my top five list of sights to see in this lifetime and I hadn’t been to California for nearly a decade. Basically, the stoke level was high.

In true Stephanie fashion, I spent the morning of the day that I was leaving booking my campsites for the following week. I, by grace of a miracle, scored a spot in Zion for one night and then managed to find RV campsites in both Newport Beach and Mission Bay. In hindsight, I timed the trip perfectly. School just started, and it was right before Labor Day weekend. I wish I could applaud myself for such a brilliant idea, but I will unashamedly admit that I no longer remember the days of the week (hashtag freelance life). I will also unashamedly admit that I’ve never been good about remembering holidays (minus Christmas, of course). So, I’ll take the genius compliment, but just know that I’m really crediting luck on this one.

Yet again, in true Stephanie fashion, I got out on the road far later than I had originally planned. I always say I’m going to leave around noon, but inevitably, I’ll look at the clock when my wheels start to roll, and it will read somewhere between 3:00pm and 4:00pm (never fails). My intention was to make it to Dixie National Forest, about an hour outside of Zion, by night one. Mission not accomplished. Instead, I made it to Fishlake National Forest, about an hour outside of Dixie, and I sketchily drove my way up the rather steep dirt road in the pitch black with a severe thunderstorm warning looming on the horizon. At this point in the story, I would like to address how towing a 23’ Airstream complicates off-roading. About a mile up the mountain, I still had not found a spot, and I was actually quite worried that I was going to be forced to reverse down the shaky terrain. I repeat, in the pitch black (if you follow me on Instagram, then you know).

I settled on the most uneven surface that this Airstream will probably ever see, managed to avoid the aforementioned thunderstorm, opened the windows, and curled up under the covers with Nugget to wake up to a remarkable morning sunrise. After unsuccessful attempts to find a hike that involved a decent amount of elevation gain and a mountain summit (again, accessibility to trailheads is encumbered when pulling 6,000 pounds), we settled for a 10-mile lake loop in the center of the Dixie wilderness. 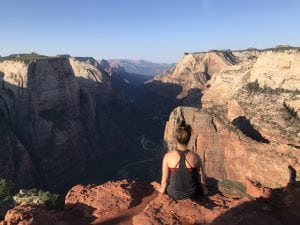 Meanwhile, Zion was calling. And, we answered. Well, I answered. Nugget, not so much. While dogs are allowed in campgrounds of National Parks, they are unfortunately not permitted on nearly all of the trails. We rolled into the east entrance off of Highway 89 with an elevated level of both anxiety and excitement. After all, it was our first time entering a National Park with the Airstream in tow. As a side note, I would highly recommend using this entry (as opposed to the west side) because it means that you get to traverse through the entire park on the way to the campground. It also means that, depending on the size of your trailer, you have to purchase a ticket to shut down the longest tunnel in Zion upon your arrival so that you can drive directly down the middle of the road. Enter here: the noise. A faint whizzing sound coming from under my hood as I handed the ticket that I had purchased to the park ranger who would graciously allow my Airstream to pass as one-way traffic. I resigned myself to the fact that a belt or pulley would need to be replaced once I made it to California. I then took it upon myself to plan out my morning in an attempt to get the most bang for my Zion-loving buck. 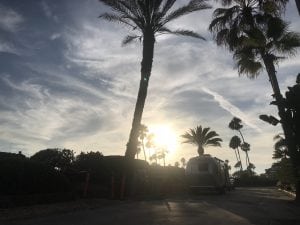 Angel’s Landing, the most popular hike in Zion, had experienced severe damage about a month prior to my arrival during a torrential storm and was still shut down. I opted for Observation Landing, the most strenuous hike in the Park, according to most of my research. Eight miles roundtrip. Twenty-five hundred feet of elevation gain. Most reported completing the hike in around five hours. Even with catching the first shuttle at 6am to drop me at the trailhead, I would have to do it in three hours in order to check out in time. No big deal. No. Big. Deal. I found myself cruising alongside an older gentleman who happened to live just outside the Park and hike the same trail once a week (thank gawd because I really needed someone to photograph me gazing out at one of the most beautiful sites I have truly ever seen).

Less than three hours later, I was packing up the trusty Yukon Denali and getting back out on the road. We arrived in Newport that evening, and I backed into my first true RV campground spot (one assistant and four tries later). I made plans with my dad – see above about the motorized bikes – and then also booked appointments for my Airstream to get some attention at the local Airstream dealer in Orange County (let’s never forget when my pantry lock broke and I opened the door to an entire broken bottle of coconut aminos teriyaki sauce oozing across the floor) and for my car to get some love from my dad’s mechanic.

The Airstream, easy fix. One hour in and out (truly, their customer service is remarkable).

The car, not so much. The sound was not a belt. Or a pulley. It was, in fact, my engine. I nervously laughed and thanked my dad, who was ironically standing next to me, for strongly encouraging me to buy that after-market extended warranty. Because, yes, engine covered. I then spent the next two days trying to align the stars to ensure that I wasn’t paying an erroneous amount for lodging. Mission Bay RV in San Diego, my intended next stop, refunded my money (bless you all) and then my dad’s friend graciously allowed me to move my Airstream to the back of his house (which happens to be the beach). 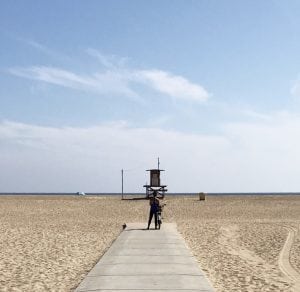 So, here I am, typing away with the windows open and hearing the waves crashing against the shore of Corona del Mar – so close that I can walk out my front door and nearly touch them. Meanwhile, my car is still waiting for its new engine, which must be approved by the warranty company. Then, delivered and installed (I’m not even going to begin to guess the number of hours that will take). And, to top it all off, it’s now Labor Day weekend.

In spite of all that, I’m happy. In fact, I don’t know that happy does this feeling justice. I’m fulfilled. I’m joyful. When my plans were altered for reasons outside of my control, I was not overcome with the stress of needing to return to a job to sit in a seat to be just another body. I wasn’t worried about sucking up all my vacation days over a shortcoming. I didn’t have to call my dog sitter to explain why it would be weeks before I’d be home again. No, my home is with me. And, my dog is snoring at my feet. And, my job, the business that I have created to work with the people who share my same passions for life, is connected to my being in such a way that I never feel like I have to work. I get to work. Here. There. Basically, anywhere with a WiFi connection.

I wish I could end this segment of my journey with something deep and profound, but I don’t really buy into “everything happens for a reason” anymore. Too many bad things happen to good people for me to fully support this mantra. I do believe that we are all out here living. Being. Trying. Failing. Succeeding. In that process, we can intellectually attach profound meaning to shitty things. So, in my head, my car was not meant to break down. It is a thing. Inanimate. But, because of my car breaking down, I can spend more time with my dad. I can revel in the California sun for just a little bit longer (there is a reason people flock down to these parts, despite there being no mountains, after all). And, I can continue to create my story, a testimony to the tribe of never-settling.

Stephanie Kemp
Stephanie is a road warrior, adventure seeker, and brand builder. She grew up in the mountains of Colorado and after spending nearly a decade between the PNW and the east coast, she’s proud to once again be calling Colorado home. Well, home for now. Stephanie recently bought an Airstream with the intention of living a more minimalistic and nomadic lifestyle. After logging over 20k miles in her car last year, chasing rock faces in the summer and powder days in the winter, she realized that life could be a hell of a lot simpler if she could carry her house with her on these adventures. In 2017, she started her own marketing agency, Sleigh Creative, to take control of her freedom. As a freelance creative director and brand strategist, she spends a lot of days playing and even more nights working. In all things, be it work or play, she seeks to inspire people to the life of never settling. You can follow along with her journey on Instagram, @by.stephanieleigh, and through her self-titled personal blog.
Tagged: Air streamerAirstreamAngel’s landingCaliforniacampingengine troublefreedomHighway 89hikingMission Bay RVnever-settlingNewport BeachNuggetObservation LandingSan Diagosilver liningtribeYukon DenaliZion National Park
OnColoradoSprings.com is a locally-owned and operated directory and information guide for Colorado Springs Colorado
Discover the best of Colorado Springs shopping, restaurants, night life, breweries, events, business, outdoors, fun, local life, real estate, transportation, jobs, and schools.
Looking for what to do in Colorado Springs? OnColoradoSprings.com has columnists, and bloggers to keep you up to date on the best of Colorado Springs, Colorado.