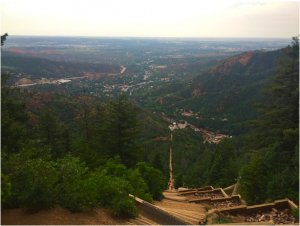 The Manitou Incline is recognized by athletes and locals as the ideal place in Colorado to get a solid cardio training session. It’s one of the area’s most loved workouts. Fitness enthusiasts enjoy the thrill of climbing a vertical mile that’s 2,000 feet tall, the outstanding views, and the accessibility of having such a workout nearby.

The trail was initially a railroad track built with 2,744 railroad ties, some of which are now the current steps of the trail. All in all, this workout is an extreme one. It took dedication to get the incline legalized for hiking by a few teams of locals, but now anyone can climb this colossal rugged staircase nearly any day they choose.

History of the Incline As A Railway

The 1-mile cable train was first finished in 1907 to help build a waterline for a hydroelectric plant. Once this was completed there were a few folks like who began to wonder if the railway might have any potential as a tourist attraction. One gentleman, Dr. Brumbach, purchased the railway and he began to pursue such opportunities.

The incline promised scenic wonders and could take visitors on a 16-minute ride up Mount Manitou. On May 9, 1912, the railway was open to the public, who turned out to be skeptical of how safe it was. Tourists began to try the train once the fare was lowered from $1 to $0.50.

The scenic trip only took 16 minutes. Once at the top, visitors could hike through the 10 miles of trails on Mount Manitou, which of course are the same trails that take people to the top of Pikes Peak. Brochures touted that “It is the longest and highest incline on the globe. You cannot afford to come to Colorado and not take this splendid scenic trip.”

In 1914, the house on top of the summit burned down. It was reconstructed rapidly with a more protective building for the riders in case a storm were to hit while they were on their way up or down. Spencer Penrose, the founder of the Broadmoor and the Pikes Peak Highway, purchased the Incline in 1923. He gave the railway car an upgrade to include additional safety features and a retractable roof. This station was upgraded again in 1958 and remained on top of Mt. Manitou until it was taken down when the incline was closed.

While the Incline persisted as a tourist attraction for numerous years, frequent rockslides made the costs to maintain the railway extremely high. In 1990, the train was closed. Another rockslide damaged the tracks so much so that it required $100,000 of repair. Though 35,000 people signed a petition and wanted the train to remain running, the operation had been continuously declining from when it was at its peak. The train still carried 45,000 riders up the mountain in the final year that it ran. 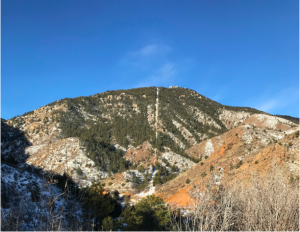 History of the Incline As A Hike

In 1990, AdAmAn hikers began training on the incline for the annual New Year’s hike up Pikes Peak. Every year at midnight they shoot fireworks over the towns below. The event is entirely unique to Manitou and gives the majestic peak a sprinkle of color to help bring in the New Year with some extra excitement.

Matt Carpenter, a well-known runner, began The Incline Club in 1997 as a way to get some weekly exercise in.

Shortly thereafter, The Cog Railway posted signs forbidding trespassing. The Incline Club stopped working out on the train track remains because it became a PR nightmare. Cog Railway management kept attempting to limit access with additional signs and a rope, but their efforts were futile. People kept coming back.

By 2004, the trail was still roped off and closed. A small group of runners started to discuss the potential of authenticating the trail with the Cog Railway, local officials, and the U.S. Forest Service. Though no agreement had been reached to legalize the trail, in 2006 a guidebook called “Best Loop Hikes: Colorado” was the first book to list directions and a description of the hike.

Finally, in 2009, city officials in Colorado Springs and Manitou Springs began brainstorming a plan to open and manage the Incline. Yet, the budget crisis was a roadblock and there were other issues they had to prioritize. Shortly thereafter, Great Outdoors Colorado came to the rescue with a $70,500 grant, in addition to a $25,000 donation from humanitarian Lyda Hill to begin establishing an Incline management plan.

This expedited plans quite a bit. In June 2010, a draft management plan was finished and several public meetings were held to begin managing the Incline. The plan was approved in March 2011 by the Manitou Springs and Colorado Springs city councils, and 13 conditions were listed that would have to be met in order to open the trail.

However, the process was halted again in June 2011. Once a railroad is abandoned, a document must be filed with the U.S. Forest Service. Since there was no document stating that the Scenic Railway was abandoned legally by the Pikes Peak Cog Railway, plans to open the trail had to be put on hold once more. Planning efforts wouldn’t be able to continue again until January 2013, when Barack Obama signed a bill that settled the railway abandonment problem.

On January 29, 2013, The Manitou Springs City Council permits foot traffic on the Incline and February 1 marked the first day that it was finally legal to hike the incline. From that day forward, many renovations and hours of hard work have gone into preserving this unique trail. Millions have been spent on restoring the trail, specifically parts of the trail that had been hit hard with rain.

Words of Warning and Important Incline Safety Tips for Hikers

In the summer, it’s typical to see joggers, walkers, runners, and hikers heading toward the trailhead. Many have hiked up the incline since it reopened, but it’s not ideal for those who are fearful of heights. There are plenty of steep and jagged areas that can make it dangerous.

The route is short but it’s extremely vertical: hikers ascend almost 2000 feet in just ¾ of a mile. The Incline is only intended for hikers who are on their way up. After the trail, there is a connection to the Barr Trail at the top of the incline, which is a much more leisurely 3-mile journey down the mountain. Be aware that it is highly dangerous to walk down the incline.

The old railroad ties still make for some massive stairs to climb. Improvements to the Incline in recent years have included a bailout point for hikers who need to work up to the full hike. This cuts out the hike to the top of the incline and will lead people to the Barr Trail without having to make it to the actual top. Though there is a false summit near the top that causes angst for many tired hikers, passing the false summit means there’s only ¼ of the way left to go.

Take caution! All hikers should be aware that this is an intense and extreme t

rail. Those who are not acclimated to physical activity or the altitude should first work up to it. Ask your doctor before including the Incline in your workout plan.

Keep in mind that First Responders are available, but even they ask people to be cautious as it could take them more than an hour to reach you if you need help. Bring water and sunscreen on your Incline hike and don’t be in a hurry. It doesn’t matter how fast you go. There’s not usually much shade up there, but hikers are always encouraged to stop and rest if they’re not ready to keep tackling the mountain.

Amanda Rose Barker
Amanda is a writer, artist, creator, and free spirit. She is a graduate of the University of Colorado at Colorado Springs and received her B.A. in English with an emphasis in Professional and Technical Writing. Amanda was born and raised in Colorado Springs but now resides in beautiful Manitou Springs with her family. Since graduation, she’s been busy raising her daughter and working as a government contracted technical writer, ghostwriter, and digital content marketer. Following her passion led her to follow in her parents’ and grandparents’ footsteps as business owners and founders of the treasured Woodland Park Donut Mill. To achieve the freedom she desired, she and a colleague began their own marketing agency, Forrest & Rose (forrestandrose.com), to further leverage her talent. As the director of content and copywriter, she is able to put her heart, attentiveness, and passion directly into her client’s work.
Tagged: athletescolorado springshikingmanitou springs
OnColoradoSprings.com is a locally-owned and operated directory and information guide for Colorado Springs Colorado
Discover the best of Colorado Springs shopping, restaurants, night life, breweries, events, business, outdoors, fun, local life, real estate, transportation, jobs, and schools.
Looking for what to do in Colorado Springs? OnColoradoSprings.com has columnists, and bloggers to keep you up to date on the best of Colorado Springs, Colorado.