How Far Is Too Far In Comics? 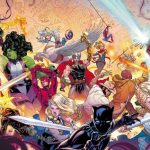 While I was working on my list of comics to order from Previews last month I noticed a surprising change to two Marvel series I was ordering. I was looking over the Marvel catalog section of Previews when I noticed that two of the series I was ordering from Marvel had made a change to the pricing of their War of the Realms mini series and the Avengers tie in issue to the same event. The average comic book is thirty two pages long and averages four dollars per page. For some reason Marvel listed War of the Realms issues three and four where listed in Previews for thirty two pages for five dollars. Normally... Read More