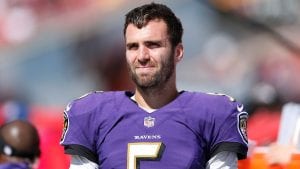 Bronco Nation scratched their collaborative heads last week when it was reported that Denver had acquired quarterback Joe Flacco from the Baltimore Ravens in exchange for a middle-round draft pick.  The signing of the 34-year-old, former Super Bowl MVP undoubtedly means the end of the Case Keenum experiment, but what does it say about the direction of the franchise?

With playoff victories and veteran experience, Flacco looks to bring the leadership and maturity that the Broncos haven’t had since Peyton Manning.  But the reality is Flacco was benched in Baltimore for rookie Lamar Jackson, has a QBR of about 50 over the last four years, and is, without question, on the back end of his NFL career.

With a new coaching staff, new quarterback, ownership struggles, and a GM in John Elway, whose contract expires at the end of the 2021 season, is Flacco the solution?  A temporary upgrade? A Hail Mary? Are the Broncos all in? Rebuilding? What exactly is the plan?

Players are bound to be released, contracts restructured, and free agents signed over the next few months, but watch for the 2019 NFL Draft to provide insight, if not the tea leaves, for Denver’s future plans.

The players – and what it could mean.

Finally, beware of quarterback Daniel Jones (Duke), or any QB that drops to the second round.  While picking up a quarterback in the late second round seems like a value pick, and a potential fix for the future, would Denver still take a shot at QB in the 2020 draft if they just invested a second round pick the year before?  I’m willing to wait. Just not sure if Elway is.

Alan Tapley
Alan Tapley is an educator, author, and blogger who has lived just outside of Boulder for the last twenty years.  His published work includes two novels, two children’s books, a series of cartoons in the Minneapolis Star-Tribune, and multiple sports related articles. His love for family and the state of Colorado is only matched by one thing, his passion for sports.  The first baseball game he ever attended was at Wrigley Field, before there were lights.  At the final Bronco game at the old Mile High, he allegedly cut out a piece of his seat in the South stands.  But regardless of being here for the Avalanche’s last Stanley Cup, the Rockies only World Series appearance, and all the Broncos’ Super Bowl Victories, his wife never fails to remind him that he wasn’t at the University of Colorado in 1990, like she was.  The year the Buffs football team won the National Championship
Tagged: Daniel JonesDenver BroncosEd OliverGreedy WilliamsJawaan TaylorJoe FlaccoJohn ElwayJonah WilliamsKyler MurrayNFLNFL Draft
OnColoradoSprings.com is a locally-owned and operated directory and information guide for Colorado Springs Colorado
Discover the best of Colorado Springs shopping, restaurants, night life, breweries, events, business, outdoors, fun, local life, real estate, transportation, jobs, and schools.
Looking for what to do in Colorado Springs? OnColoradoSprings.com has columnists, and bloggers to keep you up to date on the best of Colorado Springs, Colorado.