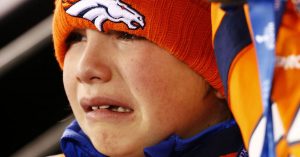 The season is finally over.  To recap, the Broncos finished 6-10 with losses to the NY Jets, San Francisco 49ers, Cleveland Browns, and Oakland Raiders, Case Keenum ranked 29th in quarterback rating, the entire coaching staff is job hunting, and John Elway needs a plan.  Here are five of them.

Alan Tapley
Alan Tapley is an educator, author, and blogger who has lived just outside of Boulder for the last twenty years.  His published work includes two novels, two children’s books, a series of cartoons in the Minneapolis Star-Tribune, and multiple sports related articles. His love for family and the state of Colorado is only matched by one thing, his passion for sports.  The first baseball game he ever attended was at Wrigley Field, before there were lights.  At the final Bronco game at the old Mile High, he allegedly cut out a piece of his seat in the South stands.  But regardless of being here for the Avalanche’s last Stanley Cup, the Rockies only World Series appearance, and all the Broncos’ Super Bowl Victories, his wife never fails to remind him that he wasn’t at the University of Colorado in 1990, like she was.  The year the Buffs football team won the National Championship
Tagged: Case KeenumDenver BroncosDevin WhiteJake FrommeJalen RamseyJohn ElwayJonah WilliamsJustin HerbertKyler MurrayLincoln RileyNFLTrevor LawrenceTua TagovailoaVon MillerWill Grier
OnColoradoSprings.com is a locally-owned and operated directory and information guide for Colorado Springs Colorado
Discover the best of Colorado Springs shopping, restaurants, night life, breweries, events, business, outdoors, fun, local life, real estate, transportation, jobs, and schools.
Looking for what to do in Colorado Springs? OnColoradoSprings.com has columnists, and bloggers to keep you up to date on the best of Colorado Springs, Colorado.