Thou Shenault Doubt the Buffs 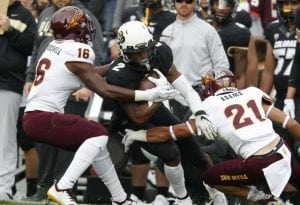 The Colorado Buffaloes (5-0) extended their winning streak to five games with an impressive 28-21 victory over Arizona State last Saturday.  Running back Travon McMillan rushed for 136 yards on 30 carries, and quarterback Steven Montez was sharp as he added 328 yards and 2 TDs in the air.  The win put the Buffs atop the South Division of the Pac-12, and undoubtedly will move them up college rankings.  Football is the ultimate team sport, but after a four-touchdown performance, wide receiver Laviska Shenault Jr. is creating his own headlines. 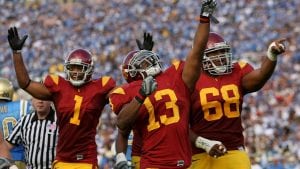 The reality is that Laviska Shenault Jr.’s Heisman chances will coincide with the Buff’s success.  While beating the likes of CSU, Nebraska, and UCLA sounds good on paper, CSU is struggling, Nebraska is 0-5 under Scott Frost, and UCLA has yet to win under Chip Kelly.  Upcoming games on the road against USC and Washington will tell us whether the Buffs are pretenders or contenders.  Either way, the leaves are changing colors, the tailgate parties are plentiful, and the Buffs are undefeated for now.  Beating USC at the Coliseum might be a stretch, but despite the cold weather here in Boulder, the Buffs are streaking.

Alan Tapley
Alan Tapley is an educator, author, and blogger who has lived just outside of Boulder for the last twenty years.  His published work includes two novels, two children’s books, a series of cartoons in the Minneapolis Star-Tribune, and multiple sports related articles. His love for family and the state of Colorado is only matched by one thing, his passion for sports.  The first baseball game he ever attended was at Wrigley Field, before there were lights.  At the final Bronco game at the old Mile High, he allegedly cut out a piece of his seat in the South stands.  But regardless of being here for the Avalanche’s last Stanley Cup, the Rockies only World Series appearance, and all the Broncos’ Super Bowl Victories, his wife never fails to remind him that he wasn’t at the University of Colorado in 1990, like she was.  The year the Buffs football team won the National Championship
Tagged: Arizona State Sun DevilsChip KellyCollege FootballColorado BuffaloesCSUHeismanLaviska Shenault Jr.NCAAPac 12Paul RichardsonRashaan SalaamScott FrostSteven MontezTravon McMillanUCLAUSC
OnColoradoSprings.com is a locally-owned and operated directory and information guide for Colorado Springs Colorado
Discover the best of Colorado Springs shopping, restaurants, night life, breweries, events, business, outdoors, fun, local life, real estate, transportation, jobs, and schools.
Looking for what to do in Colorado Springs? OnColoradoSprings.com has columnists, and bloggers to keep you up to date on the best of Colorado Springs, Colorado.