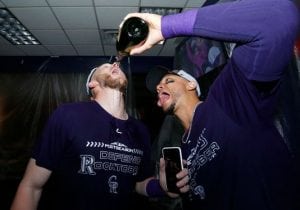 What a difference a week makes.  Well, ten games to be exact.  After getting swept by the Los Angeles Dodgers, the Colorado Rockies were sitting at 82-70 and 2 ½ games out of first place.  Trevor Story had injured his arm, Nolan Arenado was in a major slump, the Rockies were fading from playoff contention, and I was writing their obituary. But the Rockies ended up winning nine out of their last ten games in what could only be described as the perfect storm, and for the first time in Rockies history, Colorado has made the playoffs in back-to-back seasons.  I tried to find the one single catalyst for the epic turnaround, but instead I found eight.

Maybe it’s the fact that Matt Holiday is still in the dugout, but it’s hard not to think back to 2007 when the Rockies won 14 of their last 15 on their way to the World Series.  Holiday was remembered for

that historic play in which he tagged up from third, barely avoiding the tag, and winning the game with a bloodied lip.  And now he sits, years later, like Roy Hobbs from The Natural.  The book is a little sad, but in the movie version, Roy’s team magically wins it all.  Maybe it’s a sign.

Alan Tapley
Alan Tapley is an educator, author, and blogger who has lived just outside of Boulder for the last twenty years.  His published work includes two novels, two children’s books, a series of cartoons in the Minneapolis Star-Tribune, and multiple sports related articles. His love for family and the state of Colorado is only matched by one thing, his passion for sports.  The first baseball game he ever attended was at Wrigley Field, before there were lights.  At the final Bronco game at the old Mile High, he allegedly cut out a piece of his seat in the South stands.  But regardless of being here for the Avalanche’s last Stanley Cup, the Rockies only World Series appearance, and all the Broncos’ Super Bowl Victories, his wife never fails to remind him that he wasn’t at the University of Colorado in 1990, like she was.  The year the Buffs football team won the National Championship
Tagged: Charlie BlackmonColorado RockiesDavid DahlGerman MarquezIan DesmondKyle FreelandLos Angeles DodgersMatt HolidayMLBNL WestNolan ArenadoPlayoffsRoy HobbsScott ObergTrevor StoryWade Davis
OnColoradoSprings.com is a locally-owned and operated directory and information guide for Colorado Springs Colorado
Discover the best of Colorado Springs shopping, restaurants, night life, breweries, events, business, outdoors, fun, local life, real estate, transportation, jobs, and schools.
Looking for what to do in Colorado Springs? OnColoradoSprings.com has columnists, and bloggers to keep you up to date on the best of Colorado Springs, Colorado.