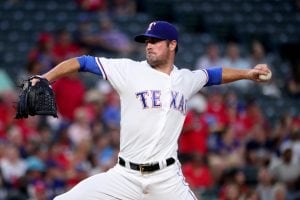 With the MLB trade deadline approaching and the Colorado Rockies soundly in the playoff hunt, the question remains whether Colorado will be aggressive in acquiring talent before the July 31 deadline.  Currently positioned in third place, just behind the Los Angeles Dodgers, and in a basic dead heat with the Arizona Diamondbacks, Milwaukee Brewers, and Atlanta Braves, the Rockies have a tough decision to make.  Go add some talent to keep up with the other teams, or hope their current roster is good enough.  Here are four players the Rockies should go after, and a fifth they probably will.

It’s Rockies-trade-deadline 101.  Do nothing and Nolan Arenado and the fans think you don’t care enough about winning.  Get a pitcher with an ERA above 5.00 and he’s a bum, below 4.00 and he’s too expensive. Or…hope LeMahieu gets healthy, Jon Gray finds his game, Ian Desmond stays hot, Adam Ottavino’s arm doesn’t fall

off, Bryan Shaw stays on the bench, and Arenado, Trevor Story, and Charlie Blackmon continue to carry the team….then all we need is a Javy Guerra (32 years old, 4.26 ERA) and we can win this thing.

Alan Tapley
Alan Tapley is an educator, author, and blogger who has lived just outside of Boulder for the last twenty years.  His published work includes two novels, two children’s books, a series of cartoons in the Minneapolis Star-Tribune, and multiple sports related articles. His love for family and the state of Colorado is only matched by one thing, his passion for sports.  The first baseball game he ever attended was at Wrigley Field, before there were lights.  At the final Bronco game at the old Mile High, he allegedly cut out a piece of his seat in the South stands.  But regardless of being here for the Avalanche’s last Stanley Cup, the Rockies only World Series appearance, and all the Broncos’ Super Bowl Victories, his wife never fails to remind him that he wasn’t at the University of Colorado in 1990, like she was.  The year the Buffs football team won the National Championship
Tagged: Adam JonesAdam OttavinoArizona DiamondbacksBrad BrachBud BlackCole HamelsColorado RockiesEduardo EscobarJavy GuerraJohnathan LucroyLos Angeles DodgersMLBNolan ArenadoTrade deadlineTrevor Story
OnColoradoSprings.com is a locally-owned and operated directory and information guide for Colorado Springs Colorado
Discover the best of Colorado Springs shopping, restaurants, night life, breweries, events, business, outdoors, fun, local life, real estate, transportation, jobs, and schools.
Looking for what to do in Colorado Springs? OnColoradoSprings.com has columnists, and bloggers to keep you up to date on the best of Colorado Springs, Colorado.