Some movies only require a script, actors, and a camera. A good and tragically underseen example of this is 2018’s The Standoff at Sparrow Creek, a thriller following an ex-cop investigating a police funeral and his suspicion that the shooter belongs to the same militia he does. 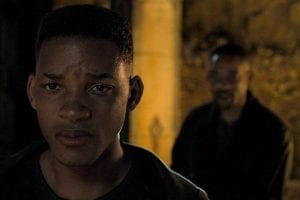 It’s a great film that had an estimated budget of $450,000. Costs were kept low by keeping the locations modest. It also helped that the vast majority of scenes were essentially guys talking to each other in rooms. It’s a great film due to smart writing, efficient direction, and strong acting. Does the fact that it had a minuscule budget contribute to its greatness? Well…that’s where things get a little complicated.

For a certain stripe of moviegoers, a movie’s quality is in inverse proportion to the amount that it costs. If a film features a well-known actor, it’s probably garbage. If a film has genre elements, it’s almost certainly garbage. And if a film features extensive CGI, then, my friends, it’s an Everest-sized mountain of trash with garbage-flavored smoke choking the sky. You get the idea.

I tend to look at things a little differently. Certain stories need special effects to be told. Dawn of the Planet of the Apes absolutely requires a metric assload of CGI, yet the CGI is a tool used in the service of a strong story. Spending the gross national product of Guatemala on visual effects doesn’t necessarily mean you’ll end up with soulless corporate product designed only to be empty bombast. As a result, that childlike belief causes me to get metaphorically kicked in the nuts over and over by films like Gemini Man. Allow me to explain.

Like a thousand other movies, we’re introduced to Henry Brogan (Will Smith), a government assassin who’s the best there is.* How Good Is He, the movie asks? He’s so good that using a sniper rifle, he’s able to shoot a guy sitting in a moving bullet train. Weirdly, lots of people throughout the film tell Henry he’s the best, and it starts with his spotter and hype man Marino (E.J. Bonilla) wasting no time telling Henry just how skilled he is.

Scratch that, perhaps he isn’t the best. While Henry was supposed to shoot his target in the head, he “only” shot him in the neck. The guy is still as dead as Julius Caesar, but Henry takes it as a sign he’s losing a step due to age.** Our Hero decides retirement and a life futzing around with boats in Georgia is a good option. Do we receive a film in which an aging assassin reconnects with his humanity by restoring an old boat, perhaps with the help of an adorable tyke? We do not.

Instead, Henry discovers that the new boat rental employee Danny (Mary Elizabeth Winstead) is actually a fellow intelligence operative sent to keep tabs on him. Does that make sense, considering that almost immediately after Henry discovers this, Marino is killed and a team of armed goons tries and fails to kill Henry? Nope, and it’s all basically due to a spat between Henry’s boss Lassiter (Linda Emond) and Clay Varris (Clive Owen), the head of a tippy-top secret unit codenamed “Gemini.” Varris’ unit handles murder, kidnapping, overthrowing governments, and presumably some light catering.

Anyway, Henry proceeds to go on the run with Danny and Baron (Benedict Wong), an old pilot buddy who conveniently owns a Gulfstream jet. While holed up in Cartagena, Henry is attacked by a unique assassin. This one is as good as he is, maybe even better. After a jolly good motorbike chase, Henry gets a good look at his pursuer. He’s more than a little surprised to learn he’s been sent to kill himself. The gunman is Junior, a younger, faster, and more ferocious clone of Henry. As you might imagine, things don’t get settled over a good cup of coffee and scones.

If the shrug emoji were transformed into a movie, that movie would be Gemini Man. This a weird concept, considering the pedigree of the people involved in the film. It gets weird when you consider director Ang Lee. By and large, I love his stuff. Crouching Tiger, Hidden Dragon, and Brokeback Mountain are perfect films, and he tends to be a thoughtful director who frequently focuses on repression. 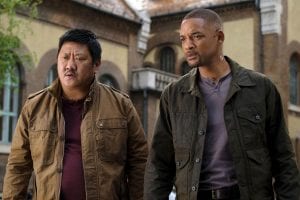 However, there’s another side of Ang Lee, one that sometimes plays around with cinematic technology at the expense of strong storytelling.*** We’ve seen that in a few of Lee’s films, such as Life of Pi and Billy Lynn’s Long Halftime Walk. That side is on display here. Through massively expensive performance capture, Will Smith simultaneously plays the 51-year-old Henry and the 23-year-old Junior. The effect doesn’t work. Look at the face of CGI Whippersnapper Will, and it’s as if Smith is sharing the screen with a character from a video game cutscene.

Making things stranger is the fact that Gemini Man isn’t a bad movie as such, it just feels like it escaped from a movie theater in 1996. It has a decidedly old-fashioned feel to it, and you could drop it into a film festival showing Con Air and Face/Off without attracting too much attention. That’s fine, but when you put it up against more technically accomplished films like the John Wick series or the last few Mission: Impossible films, Gemini Man can’t compete.

The main reason the film feels like such a throwback is the fact that the screenplay has been floating around Hollywood for literally 20 years. Originally written by Darren Lemke, high-profile actors like Harrison Ford, Mel Gibson, and Clint Eastwood were attached. A dizzying series of rewrites occurred from script doctors Billy Ray and David Benioff. After all that, we’re left with a screenplay that feels slight and a teensy-weensy bit dumb. We’re told that young Will Smith is a superior combatant due to being younger. Yet Old Smith has more experience, more wisdom, and is more effective in virtually every way. That makes the real message of the film that, by and large, young people are morons.

Other than the profitable and little-loved remake of Aladdin, Will Smith hasn’t exactly been setting the box office on fire during the last few years. That’s a bummer since Smith is a talented and versatile performer. He’s also a movie star who made it big by playing variations on a specific persona. Here, Smith is doing essentially the same thing. His Henry is smart, confident, cocky, and while he makes a few jokes about being old, we’re quickly reassured he’s not that old. While he tells characters that he can’t sleep due to the trauma of killing scores of people, he seems more grumpy than traumatized. His best work is when he bounces off strong supporting players Benedict Wong and Mary Elizabeth Winstead, and it’s there that the film earns a pleasant hum of energy.

There’s a strange irony at work with Gemini Man. The vast majority of people will have forgotten its existence entirely by this time next month. For a film that doesn’t matter, it nudges open one door a little wider, one in which regular actors are entirely replaced with CGI thespians. As a result, film snobs will utilize an obnoxiously broad brush to paint films utilizing special effects as disposable junk. It’s amazing to me that a film that preaches the importance of wisdom can’t appreciate its own effects on movies.

*What’s the metric for being the best contract killer, though? Is it based on the body count? The degree of difficulty of the jobs? I prefer The Great British Baking Show system, were just getting into the tent makes you elite (and makes me wonder where the other 11 Will Smith clones are).

**If I’m Henry’s boss and hear that, I’d probably respond with, “Hey, dead’s dead. Let’s celebrate with some mozzarella sticks.”

***Adding to the technological smorgasbord is the fact that Lee shot the film…differently. Most movies are shot at 24 frames per second. Gemini Man is shot at 120 frames per second using a digital 4k camera for 3-D. Exactly no theaters in the United States are equipped to display the film the way Lee wanted it shown. Only 14 theaters in our country are showing the movie in 120 frames per second in 2k 3-D, and one of those theaters is the AMC Flatiron Crossing here in Westminster, Colorado. You can read more about Lee’s audacious nonsense here.

Tim Brennan
Tim has been alarmingly enthusiastic about movies ever since childhood. He grew up in Boulder and, foolishly, left Colorado to study Communications in Washington State. Making matters worse, he moved to Connecticut after meeting his too-good-for-him wife. Drawn by the Rockies and a mild climate, he triumphantly returned and settled down back in Boulder County. He's written numerous screenplays, loves hiking, and embarrassed himself in front of Samuel L. Jackson. True story.
Tagged: ang leebenedict wongbilly rayclive owendarren lemkedavid benioffe.j. bonillagemini manmary elizabeth winsteadwill smith
OnColoradoSprings.com is a locally-owned and operated directory and information guide for Colorado Springs Colorado
Discover the best of Colorado Springs shopping, restaurants, night life, breweries, events, business, outdoors, fun, local life, real estate, transportation, jobs, and schools.
Looking for what to do in Colorado Springs? OnColoradoSprings.com has columnists, and bloggers to keep you up to date on the best of Colorado Springs, Colorado.