Rambo is worth taking seriously.

Okay, stop. Please, please stop laughing. I’m serious! Well…kind of. I know that in the world of pop culture, Rambo occupies a very distinctive place. A place that’s viewed as anti-intellectual, overly aggressive, and more than a tad racist. Sylvester Stallone’s musclebound murderer has been featured in movies, books, video games, and even a Saturday morning cartoon.

Maybe it’s not quite fair to put the ownership of Rambo entirely upon Stallone. The character was first introduced in David Morrell’s 1972 novel First Blood. It’s a lean and mean thriller that doesn’t screw around, and Morrell takes the myth of war heroes like Audie Murphy and pushes it in a compelling direction.

After that, Sylvester Stallone got involved, and over several decades we got:

We’re now in the late period phase of Sylvester Stallone’s career, and a brief glance at his filmography shows us a mixture of cheap direct-to-video movies and sequels to earlier hits. The most recent of these is Rambo: Last Blood. Is the series closed out with notes of intelligence? It is not. 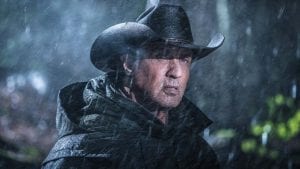 We’re reintroduced to Rambo, who’s spent several years living quietly on his Arizona ranch. He’s become highly proficient at horse riding and training, and my heart leaped at the thought of a movie about Rambo becoming a rodeo trick rider. Alas, it was not to be, and my disappointment was profound. He’s also spent a great deal of time digging a network of tunnels underneath the property. Why, pray tell, has he done this? We have no idea. Maybe he’s just really into Dig Dug.

Anyway, it’s not as if Rambo is rattling around the ranch all by his lonesome. He lives with his old friend Maria (Adriana Barraza) and her granddaughter Gabrielle (Yvette Monreal). Gabrielle calls Rambo “Uncle John,” but he’s really more of a surrogate father to her. We’re told that Rambo takes a galaxy of medications to manage his simmering rage. We’re also told that the bond between Rambo and Gabrielle is so strong that the former killing machine has become positively cheery. How can two seemingly contradictory ideas be introduced within seconds within this movie? Why, reasons, silly viewer!

Yet all is not tranquil in casa del Rambo. Gabrielle has discovered the whereabouts of her biological father. It turns out her pops skipped town when her mother got cancer and is living across the border in Mexico. Understandably, Gabrielle wants a word with him. Rambo warns her that Mexico is a violent nightmare that no human being would want to visit; a shithole country, if you will.

Naturally, she doesn’t listen, and she’s promptly captured by the wicked Martinez Brothers. There’s Victor (Oscar Jaenada), a violent psychopath, and Hugo (Sergio Peris-Mencheta), also a violent psychopath. Their plan is for her to be sold as a sex slave. When Rambo learns of her kidnapping, he heads to the headquarters of the Martinez Brothers and immediately gets his ass whipped. Our Hero is nursed back to health by “independent journalist” Carmen, and he must formulate a plan to rescue Gabrielle and slaughter as many faceless henchmen as possible. 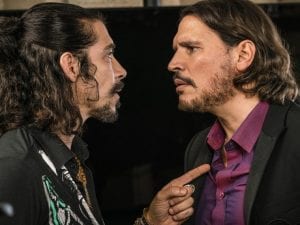 The problem isn’t just that Rambo: Last Blood is a bad movie. The problem is that the ingredients are there to cleanly cap off the franchise and actually say something of value. Could director Adrian Grunberg have fixed it? He’s got the chops, as he’s spent decades as an assistant director and made the surprisingly pretty good Mel Gibson vehicle Get the Gringo. He’s also a journeyman filmmaker this time around, one lacking in a singular vision. His staging is clunky, his shots are often very dark, and there are only a few action sequences.

There’s one action sequence in particular we should discuss. Remember I mentioned Rambo’s underground antics? During two montages** we see him setting a massive amount of traps within the tunnels. The climax features numerous henchmen being shot, stabbed, beheaded, impaled, punched, crushed, and generally disrespected. It plays like the kid from Home Alone grew up and spent several satisfying years with the Green Berets. Can we assume that Rambo dug the tunnels on the off chance that he’d need to kill a bunch of people within them? If so, doesn’t that make Rambo…well…a serial killer?

A smart screenplay might have run in that direction, the idea that Rambo has always been the Frankenstein’s monster of the U.S. military and this is just the extreme example of the inattention veterans receive. Written by Stallone and Matthew Cirulnick, what we have here is nothing like a smart screenplay. None of the female characters behave with anything approaching agency, which would have been nice. If you’re going to have a hypercompetent slab of granite as your protagonist, then you damn sure ought to have an antagonist that’s equal to him—either someone who’s as much of a killing machine as Rambo or someone who excels intellectually as much as Rambo excels physically. Not so much here, and our villains have no relatable personalities or motivations, other than being snarling psychopaths plucked from the fever dreams of the MAGA swamp. The rancid icing on this trash bag cake is characters speaking in the most obvious dialogue possible, like Rambo saying at one point, “I tried to come home, but I never really arrived…” 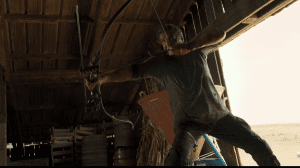 I’ll ask you again to hold your derisive laughter, but Sylvester Stallone is a genuinely intelligent man, as well as a genuinely talented performer. He’s a deft hand at comedy, he can hold his own with the greats when it comes to drama, and he can portray an action hero who’s sympathetic and vulnerable. The problem with his performance here is that he’s playing a guy named John Rambo, but he’s not behaving like the Rambo we knew for three-quarters of the movie. In prior films, Stallone has portrayed him as a deeply damaged man who wields violence as an art and hates himself for it. Yet for the majority of Last Blood, Rambo is fairly laid-back and even cracks a few jokes. It’s as if Stallone is playing, I don’t know, Ron Glambo, an escapee from a Taken and Logan rip-off.

It wasn’t long ago that Creed was released and the character of Rocky Balboa came full-circle. Rocky is probably Stallone’s most beloved character, but there was a way for the character of John Rambo to receive a degree of closure. A door was open, but I wonder if it hasn’t closed now due to Stallone’s age and the low probability that Rambo: Last Blood becomes a hit. First Blood examined a man grappling with PTSD that’s forced into violence. Last Blood, unfortunately, examines a franchise grappling with a shocking lack of relevance.

*But, unfortunately, not at the same time.

**Somebody could write a fascinating dissertation about the meaning of montages in Stallone movies. However, I am not that somebody.

Kaylee Huntley
Kaylee was raised (but not *technically* born) in Colorado. She graduated from Regis University with a bachelor of arts in English. During her time at Regis she worked as a teaching assistant in a freshman classroom setting and in the writing center helping students on a variety of topics. While there, she discovered Cura Personalis, or care for the entire person, leading to her love of feminism and desire for equal rights for all. Kaylee spends her time reading, writing, and debating.
Tagged: adriana barrazaoscar jaenadapaz vegarambo last bloodsergio peris-menchetasylvester stalloneyvette monreal
OnColoradoSprings.com is a locally-owned and operated directory and information guide for Colorado Springs Colorado
Discover the best of Colorado Springs shopping, restaurants, night life, breweries, events, business, outdoors, fun, local life, real estate, transportation, jobs, and schools.
Looking for what to do in Colorado Springs? OnColoradoSprings.com has columnists, and bloggers to keep you up to date on the best of Colorado Springs, Colorado.