Beyond, or: Daddy! Issues! In! Space! 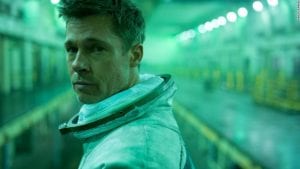 We can all agree that Stephen Hawking was a pretty bright guy. He took a look at what humanity had been up to and was quoted as saying, “I don’t think the human race will survive the next thousand years unless we spread into space. There are too many accidents that can befall life on a single planet.”

If you’re in a pessimistic frame of mind, Hawking’s quote is easy to get behind. Due to pollution, environmental mismanagement, and climate change, bird populations in North America are plummeting. That’s only a single example of how our arrogance, selfishness, and ignorance damages the place we live in. Not to get too technical, but we humans can be pretty goddamn dumb.

Does that mean we’re doomed, and that the prudent thing to do is to hide under the covers until the end? Maybe not, because the rest of Hawking’s quote is, “But I’m an optimist. We will reach out to the stars.” He’s not wrong. For every moment of evil or idiocy we witness, there are just as many of grace and compassion.

Space travel provides the human species with more than scientific advancements and colonization opportunities. It allows us the chance to evolve, to embody the promise of what we can be. Filmmaker James Gray knows that space exploration is simultaneously external and internal, and his latest film Ad Astra explores that concept with intelligence and nuance.

There isn’t a whole lot that rattles Roy McBride (Brad Pitt). In the near future, he’s an astronaut, and he’s partially become a legend because his heart rate never rises above 80 BPM—even while he’s falling to earth. As McBride works on a gigantic space antenna, a power surge strikes Earth. Thousands are killed, the antenna is destroyed, but McBride manages to keep his wits about him and survive.

The other reason McBride is a legend? He’s the son of H. Clifford McBride (Tommy Lee Jones), a fiercely intelligent astronaut who was the commander of The Lima Project. Their mission was to explore the outer reaches of the solar system and search for signs of alien life. McBride’s father has been off-planet for 26 years, and somewhere around Neptune, Earth lost contact with The Lima Project.

McBride’s BPM even stays under 80 when he’s given a mission. The surge originated near Jupiter, and it may have been caused by an antimatter device that McBride Senior was tinkering with. It’s possible that McBride’s father is alive. If so, is he behind the surge attack, and what are his intentions? Accompanied by Pruitt (Donald Sutherland), an old friend of his father, McBride must voyage to the Moon, Mars, the outer reaches of our galaxy, and the interiors of the human heart. 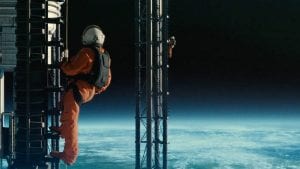 There’s been a bit of a renaissance in space cinema during the last few years. Films like Gravity and Interstellar have tried to provide a balance between hard science fiction and a meaningful emotional journey. For me, I waited for the Goldilocks Principle* to kick in, and I yearned for an astronaut movie that balanced out the emotional journey with astounding visuals. Ad Astra is precisely that movie.

Director James Gray isn’t quite a household name, and I imagine he prefers it that way. Take a look at his filmography and you’ll see that his interests lie in how experiences and exploration change people. He’s doing the same thing here as he did with The Lost City of Z, he’s just painting on a far bigger canvas. His film is handsomely shot and provides some mind bending visuals. While other directors would luxuriate in CGI, Gray frequently focuses on Brad Pitt’s face, providing us a window into his character. Before you worry that Ad Astra is going to be a cosmic snoozefest, I should mention to you the jaw-dropping set pieces that include a shootout on moon buggies and a zero-gravity fight between McBride and an extremely angry baboon. I should also mention the excellent set design, and Gray has taken great pains to depict what space travel is likely to look like in the near future.

Gray and co-writer Ethan Gross have written a smart and sophisticated screenplay with a great deal to say. Great art allows for a wealth of interpretations. You could certainly read it as a religious allegory, where a person journeys to meet their creator and discovers the truth of their purpose. I read it as more of an exploration of masculinity and how it’s affected by the bonds between a parent and child. A running voiceover by Pitt keeps the film’s point of view narrow, and that’s just as it should be. The more specific a screenplay is, the easier it is for everyone to relate.

The cast essentially exists to support Pitt at various stages, and that’s also just fine.** You’ll get Donald Sutherland for a few scenes as a grizzled ex-astronaut, a dash of Ruth Negga as a Martian administrator, and a pinch of Liv Tyler as McBride’s estranged spouse, all in service of illuminating different aspects of his humanity. 2019 is turning out to be a hell of a year for Brad Pitt, between this and Once Upon a Time…in Hollywood. He doesn’t often get the credit he deserves for acting skill, and as McBride, Pitt delivers career-best work. He’s playing a taciturn space jockey, but he never grandstands with his performance or becomes a stoic block of wood. Pitt’s McBride excels at emotional compartmentalization (as mandated by U.S. Space Command), yet discovers that emotions have a way of breaking free.

Ad Astra isn’t a CGI adventure perfect for date night, and it’s not a meditative rumination on the human condition playing in the cramped confines of an arthouse cinema. It’s more than that, a film made with impeccable craftsmanship, blazing intelligence, and emotional honesty. Ad Astra is a special film, the kind of film that isn’t made much now or back in the day. You owe it to yourself to see it.

*Nope, this isn’t some goofy term I made up. You can read about it here.

**I should also mention the quietly weird cameo appearance by Natasha Lyonne as a Mars gate agent.

Tim Brennan
Tim has been alarmingly enthusiastic about movies ever since childhood. He grew up in Boulder and, foolishly, left Colorado to study Communications in Washington State. Making matters worse, he moved to Connecticut after meeting his too-good-for-him wife. Drawn by the Rockies and a mild climate, he triumphantly returned and settled down back in Boulder County. He's written numerous screenplays, loves hiking, and embarrassed himself in front of Samuel L. Jackson. True story.
Tagged: ad astrabrad pittdonald sutherlandethan grossjames grayliv tylerruth neggatommy lee jones
OnColoradoSprings.com is a locally-owned and operated directory and information guide for Colorado Springs Colorado
Discover the best of Colorado Springs shopping, restaurants, night life, breweries, events, business, outdoors, fun, local life, real estate, transportation, jobs, and schools.
Looking for what to do in Colorado Springs? OnColoradoSprings.com has columnists, and bloggers to keep you up to date on the best of Colorado Springs, Colorado.