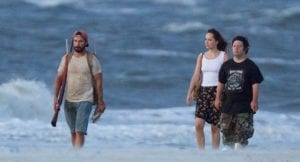 To say that Shia LaBeouf has had an unpredictable career would be an understatement. Consider that, at ten years old, he attempted to launch a stand-up comedy career. From there, he became a Disney Channel wunderkind, and younger audiences were the first ones to witness his talent.

I can hear between guffaws, many of you saying, “Talent?! Pshaw! He was in the godawful Transformers movies! He was in the only terrible Indiana Jones film! He went crazy in public! Maybe lay off sniffing glue before you write your reviews, okay?” With the exception of the sniffing glue thing, all of that is true.

Strip away all the legal issues and bad behavior, and something remains. Very quietly, Shia LaBeouf has become one of the most interesting and talented actors in American film. Check him out as the intense tank gunner in Fury, or as the volatile tennis player John McEnroe in Borg vs. McEnroe. Better yet, check him out in the sweet Southern fable The Peanut Butter Falcon.

We’re introduced to Zak (Zack Gottsagen), a man with Down syndrome living in a nursing home. Did his family die? Did they abandon him? The details are hazy, but Zak knows he doesn’t belong there. He spends his days obsessively watching videotaped wrestling matches starring The Salt Water Redneck (Thomas Haden Church) and dreaming of attending his famed wrestling school. 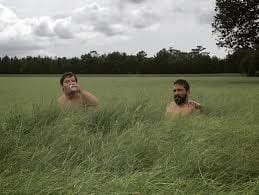 He also spends his days plotting an escape. It almost works, and he’s labeled a flight risk by Eleanor (Dakota Johnson), a compassionate woman who volunteers at the home. Maybe Zak’s roommate Carl (Bruce Dern) truly believes the kid deserves a shot at life on the outside. Maybe he’s just tired of watching that damn wrestling tape. Either way, he helps Zak bend the iron bars in front of the window, greases him up with a liberal amount of hand soap, and the young man escapes into the North Carolina night in nothing but his underwear.

Going on the lam takes a lot out of you, and Zak hides under a tarp in a beat to hell boat to get some rest. The owner of the boat is Tyler (Shia LaBeouf), a crab fisherman who has a lot going on. He’s grappling with a recent personal loss while also stealing crab from the pots of rival fisherman Duncan (John Hawkes). After burning down both Duncan’s supplies and dock, Tyler decides to leave for the quieter shores of Florida. He soon discovers an unlikely stowaway.

Some people would have immediately ditched Zak. Not Tyler. The plan is to help Zak reach the wrestling school, but they’ll need to do it quietly. Duncan is looking for a little retribution from Tyler, and Eleanor is looking to return Zak to the nursing home. While on the run, the pair will wind through the tributaries of the Outer Banks searching for a new life and build an unlikely friendship.

There are so many ways The Peanut Butter Falcon could have been insufferable. We could have had the character of Zak either put on a pedestal as an “inspirational” figure or treated as an infantilized adult. Even worse, we could have had a non-disabled actor playing the role. Had the film been made even ten years ago, I think either or both of those examples would have occurred. 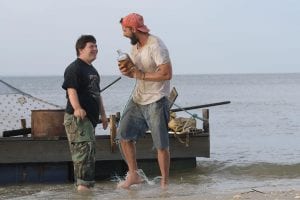 Luckily, directors Tyler Nilson and Mike Schwartz have made their feature debut with intelligence, warmth, and nuance. Their film is gorgeous, featuring lovely shots of Zak and Tyler floating on a raft through sun-dappled rivers. You can feel echoes of Huckleberry Finn and other American folk tales, where wanderers drop out of regular life and learn something while on the road. Strands of lived-in detail make The Peanut Butter Falcon feel like it takes place in a world its creators know intimately. I’ll admit things end abruptly, as Nilson and Schwartz sidestep the realistic and depressing consequences of the film. That’s okay, because their focus isn’t on bleak reality, but rather optimism and the bonds of friendship.

Nilson and Schwartz also wrote the screenplay, and I admired their decisions. Rather than focusing on the narrative and a contrived ticking clock, the script almost exclusively focuses on character development. We follow Zak, Tyler, and later Eleanor, to simply hang out with them and watch their behavior. It’s also a smart move that the script doesn’t treat down syndrome as the defining character trait for Zak. He’s a man with a very specific goal in mind, and he’s portrayed as never letting his limitations define his dreams. 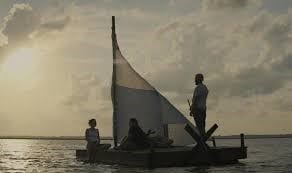 This is yet another film that stands or falls based on just the right casting. While attending a camp for disabled actors, Zack Gottsagen met Nilson and Schwartz. He’s just the right choice. As Zak, he’s determined, frightened, vulnerable, and very funny while searching for a real friend. Not many performers can mine quiet humor from virtually any situation, but Dakota Johnson excels at it. She’s thoughtful and kind as Eleanor, but her best scenes are her amused reactions to Tyler’s persistent flirting. Speaking of Tyler, Shia LaBeouf plays him as a man who’s been kicked in the teeth by the world and who yearns to make a real connection. There are no theatrical affectations, just LaBeouf playing an individual. It’s so hard to do, and he makes it look so easy.

The Peanut Butter Falcon does so much so well. Sure, there are moments that feel forced. It doesn’t matter because the film tells us that a disability isn’t a substitute for a personality. It shows us that a performer many of us dismissed as a lightweight is moving in an interesting direction, and the film proves just how much talent he has. It says that, at a moment when we needed it more than ever, optimism is real and growing.

Tim Brennan
Tim has been alarmingly enthusiastic about movies ever since childhood. He grew up in Boulder and, foolishly, left Colorado to study Communications in Washington State. Making matters worse, he moved to Connecticut after meeting his too-good-for-him wife. Drawn by the Rockies and a mild climate, he triumphantly returned and settled down back in Boulder County. He's written numerous screenplays, loves hiking, and embarrassed himself in front of Samuel L. Jackson. True story.
Tagged: bruce derndakota johnsonjohn hawkesjon bernthalmike schwartzshia labeoufthe peanut butter falconthomas haden churchtyler nilsonzack gottsagen
OnColoradoSprings.com is a locally-owned and operated directory and information guide for Colorado Springs Colorado
Discover the best of Colorado Springs shopping, restaurants, night life, breweries, events, business, outdoors, fun, local life, real estate, transportation, jobs, and schools.
Looking for what to do in Colorado Springs? OnColoradoSprings.com has columnists, and bloggers to keep you up to date on the best of Colorado Springs, Colorado.