Everyone should spend a little time working in either the food industry, retail, or customer service. More than any other profession, you’ll witness some of the best and worst aspects of human behavior. When your job is to serve food or handle phone calls, you’ll see moments of towering generosity, unimaginable pettiness, and everything in between. 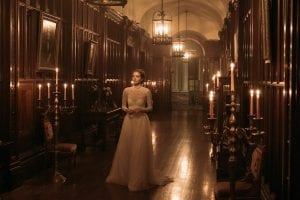 I’ve been there. I spent over ten years trapped in a cubicle, armed with nothing more than a phone, a disinterested managerial team, and a substandard personal computer. My job was to be an abuse sponge, soaking up invective from people who really ought to know better. God knows I tried to empathize. Frustration is a normal response to a problem, particularly if a company has dropped the ball repeatedly.

During that time, I learned to be unfailingly polite to the person on the other end of the phone. I learned to roll with it when mistakes happen, to compromise whenever possible and to give people the benefit of the doubt. I also learned that, by and large, rich people aren’t as intelligent, competent, or funny as they think they are.

Let’s be honest, there are successful folks out there who managed to keep it real. There are a far larger group of rich people who comfortably remain in a bubble of privilege.* Dealing with that kind of titanic tomfoolery ain’t easy for the rest of us. Sure, we could grab a bunch of guillotines and play French Revolution 1789—The Home Game, or we could viciously mock them. I’m partial to the second option, and that’s a big reason why I responded so strongly to the new horror-comedy Ready or Not.

Grace (Samara Weaving) is in love. For 18 months, she’s dated Alex (Mark O’Brien), a guy who happens to be kind, funny, smart, and easy on the eyes. He also happens to be a member of the fabulously wealthy Le Domas family. What, you haven’t heard of them? Their fortune was partially built upon the success of a number of board games. You might say that the entire family is crazy about games. 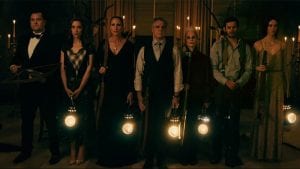 Now the time has come for Grace and Alex to tie the knot. Grace is excited. Her luck seems to have turned, as she’s found a good guy with a sprawling family. As a foster kid, she’s acutely aware of the impermanence of family. There are a few hurdles for her to clear, though, as the Le Domas brood is a little…well…eccentric. They are: 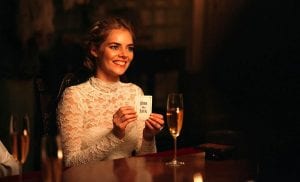 After the wedding ceremony has concluded at the sprawling Le Domas estate, there’s only one thing left to do. Great-grandfather Le Domas solidified the family fortune due to a chance encounter with a shadowy traveler and his box of games. When a new person enters the family, they must randomly pick a game from the box. Grace has chosen Hide and Seek. That’s a pity since it’s the only game where the family must arm themselves to the teeth and hunt down Grace before sunrise. Or else.

Making a horror-comedy requires balance. Lean too far in one direction, and either the comedy isn’t funny, or the scares are toothless. Directors Matt Bettinelli-Olpin and Tyler Gillett get that, and they have made a gory and goofy good time at the movies. The underloved Clue is in the DNA of Ready or Not, in which a bunch of people who think they’re smarter than they actually are bumble through a sprawling Gothic mansion. Add to that rapid-fire pacing and a succession of delightfully violent set pieces, and it adds up to a satisfying capper for the summer movie season.**

The screenplay by Guy Busick and Ryan Murphy is lean, clever, and sharp. They waste no time setting the plot in motion, and we learn about the characters based on what they do instead of what they say. The hunt should be a cakewalk for the Le Domas clan, yet the family constantly overestimates their abilities and underestimates Grace. That makes it ripe for plenty of comedy, as well as a biting commentary about the one percent hoarding resources while being too stupid to effectively use them. 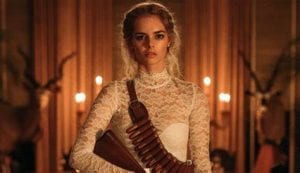 As a family of well-off weirdos, the cast understands what kind of a movie they’re in and attacks their roles with gusto. I particularly enjoyed Adam Brody as the apathetic Daniel, and he plays a certain kind of rich guy who understands that his family is up to no good but can’t be bothered to do something about it. As Tony, Henry Czerny throws himself into the role of a wealthy man holding onto his fortune by his fingernails. The film’s MVP is Samara Weaving as Grace. This is a star-making role, and she’s alternately charismatic, panicked, and ultimately formidable. She behaves the way a reasonably intelligent, normal person would who finds herself in some seriously unreasonable circumstances.

Above all, Ready or Not is a hell of a lot of fun. Come for the snark and the scares, stay for a clever satire about the idiocy of the rich. The film tells us that the rich really are different, and while we might not be able to smash the system just yet, we can absolutely give it the finger from the sidelines.

*Such as this amusing article from Politico about a trio of wealthy ding-dongs attempting to meddle with veteran health care.

**Did you sit out most of the summer due to a distaste for sequels and reboots? With this film, the sweetly filthy Good Boys, the ethical thriller Luce, or the jukebox comedy-drama Blinded by the Light, there’s literally no excuse for you not to go to the movies this weekend.

Tim Brennan
Tim has been alarmingly enthusiastic about movies ever since childhood. He grew up in Boulder and, foolishly, left Colorado to study Communications in Washington State. Making matters worse, he moved to Connecticut after meeting his too-good-for-him wife. Drawn by the Rockies and a mild climate, he triumphantly returned and settled down back in Boulder County. He's written numerous screenplays, loves hiking, and embarrassed himself in front of Samuel L. Jackson. True story.
Tagged: adam brodyandie macdowellguy busickhenry czernymark o’brienmatt bettinelli-olpinready or notryan murphysamara weavingtyler gillett
OnColoradoSprings.com is a locally-owned and operated directory and information guide for Colorado Springs Colorado
Discover the best of Colorado Springs shopping, restaurants, night life, breweries, events, business, outdoors, fun, local life, real estate, transportation, jobs, and schools.
Looking for what to do in Colorado Springs? OnColoradoSprings.com has columnists, and bloggers to keep you up to date on the best of Colorado Springs, Colorado.