Punch with Your Foot 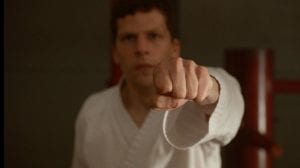 We live in a misogynistic culture; no big surprise there. But where is toxic masculinity birthed from? Along with antiquated customs and some creepy religious dogma, media can be a big driver in how us guys view ourselves and conduct ourselves. Men are supposed to be assertive—just look at Harrison Ford! Men don’t cry, just look at Clint Eastwood!*

That’s the bad news, but the good news is that we also seem to be in a period of flux. Among other concepts, long-held assumptions about gender identity are changing. How do we know that? One way is by looking at how movies portray masculinity and men these days. Avengers: Endgame portrayed men crying and openly showing emotion while also whipping large amounts of ass. It wasn’t always like that, though.

One of the most misunderstood movies in history is Fight Club. After its 1999 release, it was foolishly embraced by many as a celebration of the male ideal. Legions of knuckleheads formed their very own fight clubs and tried to adopt a more aggressive and “manly” approach to life.** Despite accidentally breeding an often repugnant fanbase, Fight Club had a great deal to say about the destruction that gullible men can cause. By comparison, the new indie comedy The Art of Self-Defense will never be mistaken as anything but vicious and bone-dry satire.

Casey (Jesse Eisenberg) is afraid. He’s afraid of the dark. He’s afraid of other men, such as the bros hanging out in his office break room. His fear is all-encompassing, and by dressing in mostly brown, living in an apartment decorated in earth tones, and even owning a sweet Dachshund, it’s almost as if he’s trying to camouflage himself as the same color of the Earth to hide from conflict. 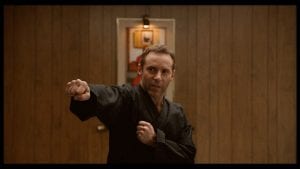 It doesn’t work, as he’s viciously mugged one night by a motorcycle gang. During his recuperation, Casey decides something has to change. His change starts with a gun. He skitters into a gun shop but is prevented from an immediate purchase by the federally mandated waiting period. So, he’s forced to wait, and we can see the thoughts and anxieties of what if? slipping across his face as he leaves.

There’s possible satisfaction to be had though, as he peers into a downscale karate dojo. The people inside—almost all men—are fit and confident. Their sensei, a man known only as Sensei (Alessandro Nivola), sizes up Casey quickly. It’s not hard, considering that Casey tells him, “I want to be what intimidates me.”

From there, Casey quickly comes to understand that Sensei’s methodology is…well, unorthodox. Along with learning kicks and armlocks, Sensei is determined to help Casey become a man. That means encouraging him to get rid of his beloved Dachshund and get a “more masculine” breed of dog like a German Shepherd. It means belittling Anna (Imogen Poots), the only female student in the dojo, with comments like, “I realized she’d never be a man because she’s a woman.” It means Casey’s introduction to Night Class and reckoning with how Sensei’s teachings are transforming his life.

Directed by Riley Stearns, the film has a tone of deadpan absurdity that I absolutely adored. A men’s magazine shown is little more than pictures of boobs and guns. Casey’s answering message always sounds vaguely annoyed at him. As the film progresses, things gradually become more sinister. Instead of fights, characters give and receive beatings. Stearns does a masterful job establishing a particular tone, then having it devolve to a more vicious place, mirroring Casey’s emotional state.

Stearns also wrote the screenplay, and he’s packed it full of offbeat humor. The jokes aren’t the kind of thing that’s going to blow up a packed theater on a Friday night. Instead, the humor is understated and delivered with a straight face, such as Casey soulfully telling his dog he’s going to stop petting him to ensure he’s not coddled. Better yet is the laser precision Stearns has of either mocking man culture or portraying it as a stupid and destructive force. His screenplay isn’t anti-male, it’s anti-a-certain-kind-of-boorish-and-entitled-male. 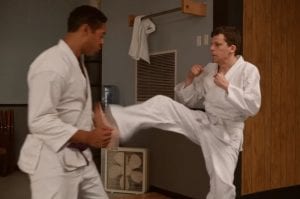 I haven’t seen a film in a long time that’s known precisely the right way to use Jesse Eisenberg. He’s often cast as a jittery fast-talker. Eisenberg leans in hard portraying Casey’s fear and desperation to belong. It’s a gutsy and hilarious performance. As Sensei, Alessandro Nivola exudes equal parts charisma and stupidity. Like certain public figures I could name, Sensei has a low cunning for quickly identifying the weakest aspects of people and exploiting them. Imogene Poots is essentially the lone woman in the cast. Her Anna is far more accomplished than anyone else in the dojo, and it’s an alarming and understandable moment when her frustration boils over, and she delivers a brutal beating to one of her rivals. The entire cast understands the specific nuance needed to make the film work, and they commit completely.

I loved The Art of Self-Defense, but there’s a good chance you might not. Going in, you need to know that it gets weird as hell, and the film has exactly zero interest in delivering a feel-good experience to audiences. That’s okay. The Art of Self-Defense understands that one of the best ways to take down a bully is by making fun of him. With precision-engineering, it delivers a hilarious ass-kicking to toxic masculinity.

*Only Clint Eastwood did cry in the very good In the Line of Fire.

**Never mind the fact that the main message in Fight Club is that people in general, and men in particular, will latch onto the most loathsome and destructive ideologies if they feel desperate enough.

Tim Brennan
Tim has been alarmingly enthusiastic about movies ever since childhood. He grew up in Boulder and, foolishly, left Colorado to study Communications in Washington State. Making matters worse, he moved to Connecticut after meeting his too-good-for-him wife. Drawn by the Rockies and a mild climate, he triumphantly returned and settled down back in Boulder County. He's written numerous screenplays, loves hiking, and embarrassed himself in front of Samuel L. Jackson. True story.
Tagged: alessandro nivoladavid zellnerimogen pootsjesse eisenbergriley stearnsthe art of self defense
OnColoradoSprings.com is a locally-owned and operated directory and information guide for Colorado Springs Colorado
Discover the best of Colorado Springs shopping, restaurants, night life, breweries, events, business, outdoors, fun, local life, real estate, transportation, jobs, and schools.
Looking for what to do in Colorado Springs? OnColoradoSprings.com has columnists, and bloggers to keep you up to date on the best of Colorado Springs, Colorado.