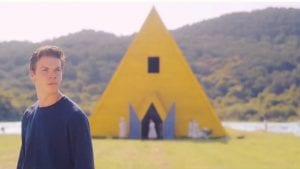 Like comedy, horror is all about provoking a reaction. It’s the setup and the punchline, only horror traffics in chills rather than chortles. If a skilled filmmaker causes a viewer to react the way they want, that means the director knows their job. If the same filmmaker can play an audience like a violin, you know you have a major talent on your hands. That’s why I love seeing horror movies with a crowd. It’s the wide variety of reactions. Some people yelp, others shrink down in their seats with hands covering eyes, and still others mask their fear with bravado.

Some horror movies, like last year’s Halloween, are designed to be a good time at the movies. Others, like Hereditary, are a different beast.* That film hit theaters like a meteor, establishing director/writer Ari Aster as a filmmaker to watch. Now, his newest film Midsommar cements his reputation as a singular and unique talent.

Some relationships simply aren’t built to last. That’s the case with grad students Dani (Florence Pugh) and Christian (Jack Reynor). They have a facade of affection that covers a creeping undergrowth of resentment and passive-aggressive behavior. Should they break up? Oh, hell yes, they should. Due to a shocking tragedy that rocks Dani, that break up doesn’t happen.

Time passes as Dani works on her recovery. That recovery increasingly looks like a way out for Christian. As so often happens with dopey boyfriends, he handles it in the dumbest way possible. His friend Pelle (Vilhelm Blomgren) is a Swedish native. The remote village he calls home has an upcoming summer celebration that takes place every 90 years, and Pelle invites a group of friends to observe. 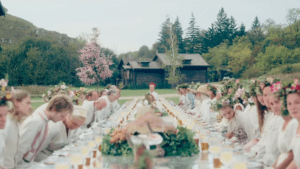 While this is the first bad idea they come up with, it certainly won’t be the last. Should the group do shrooms after arriving in an area where the sun doesn’t set for days on end? Should Mark thoughtlessly pee on an ancestral tree? Should Josh treat the locals as the focus of his thesis and not, say, as people hosting him? Maybe it doesn’t matter how they behave, because after witnessing a shocking ritual, things start to get bad…

Ari Aster has directed a film that slowly establishes a mood of profound unease. Midsommar has a running time of two and a half hours, and the film takes its time with introducing the characters and slowly revealing details of the Swedish farming commune. Aster is all about slow burns, and his film is less about jump scares and more about establishing an undercurrent of dread. When the horror does hit, he shows us some wildly upsetting imagery that contrasts with the immaculate production design. With long takes and bright colors under the Swedish sun, the film feels disturbing** and psychedelic, making it one of the most essential films of 2019. 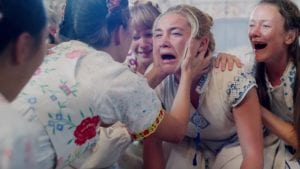 Many horror movies have an existential focus. Can Laurie survive a rampaging Michael Myers? Can Nancy prevent Freddy from killing her in her dreams? Midsommar isn’t interested in being a standard slasher movie.*** Aster’s screenplay is more interested in examining psychological responses than horror tropes. The script has a great deal to say about how we respond to trauma, what happens when we don’t get the support from people who claim to love us, and privilege both white and American. There’s also a weird kind of catharsis achieved, along with moments of what I can only call extreme empathy.

Aster excels at guiding his actors toward performances that are raw and real. His cast is uniformly excellent. I’m a little ashamed to say that I’m not too familiar with Florence Pugh’s work. I’m fixing that with a quickness, as she provides Dani with vulnerability and brittle dignity. As Christian, I admired Jack Reynor. He makes his character selfish and unlikable but gradually reveals those layers. Some of the scenes later in the film feel incredibly difficult to pull off, and both Reynor and Pugh nail them with ease. 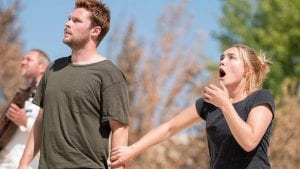 The crowd I saw Midsommar with was dead silent for the most part. You could feel a real sense of unease from them, as if they weren’t sure what they were in for and suddenly discovered they were in over their heads. As I left, I listened to various reactions. Two high school-aged girls kept repeating, “I can’t believe how f–ked up that was!” A group of college guys laid on the macho, trying to convince one another that they weren’t scared. The best response? The two guys behind me musing over what the film meant and if the characters really deserved their various fates. They knew that Midsommar is more than your standard issue spook-a-blast. It’s an art film, a depraved travelogue, and a psychological assault rolled into one.

*Some of us critic types called Hereditary and movies like it “elevated horror.” The more I think about it, the more I think I got that one wrong. It feels condescending to imply that a particular shade of horror is inherently better than the rest. We wouldn’t call GoodFellas an elevated mob movie, right?

**If you like movies that feature absolutely gnarly head trauma, you’ll love this film.

***Though it shares a lot of DNA with The Texas Chain Saw Massacre, which you can learn more about in this excellent article.

Tim Brennan
Tim has been alarmingly enthusiastic about movies ever since childhood. He grew up in Boulder and, foolishly, left Colorado to study Communications in Washington State. Making matters worse, he moved to Connecticut after meeting his too-good-for-him wife. Drawn by the Rockies and a mild climate, he triumphantly returned and settled down back in Boulder County. He's written numerous screenplays, loves hiking, and embarrassed himself in front of Samuel L. Jackson. True story.
Tagged: archie madekweari asterellora torchiaflorence pughjack reynormidsommarvilhelm blomgrenwill poulterwilliam jackson harper
OnColoradoSprings.com is a locally-owned and operated directory and information guide for Colorado Springs Colorado
Discover the best of Colorado Springs shopping, restaurants, night life, breweries, events, business, outdoors, fun, local life, real estate, transportation, jobs, and schools.
Looking for what to do in Colorado Springs? OnColoradoSprings.com has columnists, and bloggers to keep you up to date on the best of Colorado Springs, Colorado.