They Stuck the Landing 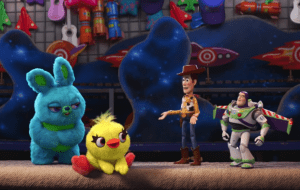 It fascinates me how people respond to art in general, and movies in particular. If I had a beer with you right now, the odds are good we’d eventually talk movies. I’d pick your brain about them and try to get a handle on what you like, what you dislike, and why. One person views Forrest Gump as a sweet-natured fable, while a second person thinks of it as anti-liberal propaganda. That’s fine, as most films occupy some kind of a middle ground. What about the classics? What about the few films that stand among the elite? And what about the people who hate those classics?

That’s why I adore heading to Amazon or the IMDB and gleefully looking up the worst reviews of the best films. One person said about The Princess Bride, “Silly movie, feels like it was written by a bunch of adolescents with only a beginning understanding of the great stories. Very juvenile.” Guys, this kind of stuff is like watching an Olympic event, the 500 meter ‘I Proudly Flaunt My Bad Taste’ Dash.

Some films stand apart. They’re the best of the best, and when a viewer can’t engage with them, I’m filled with regret that they didn’t have the kind of magnificent experience I had. That’s how I feel about the Toy Story films. With wit, intelligence, and emotion, these films make people happy. They make me happy. They are good things, and all good things must eventually end. After 2010’s Toy Story 3, I figured the franchise had gracefully concluded. Upon hearing of the release of Toy Story 4, my instincts told me it was little more than a shameless cash grab, and the negative reviewers would have a field day. Sometimes, it’s nice to be wrong. 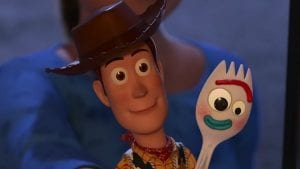 You might not feel great about things, considering we begin a) with a flashback to b) a dark and stormy night at the home of young Andy. This takes place somewhere between the second and third films, and the toy car R.C. has been left outside. He’s in danger of being swept into a storm drain and, as usual, Woody (Tom Hanks) and the other toys leap into action. The rescue is a success—mostly. While R.C. is retrieved, a man arrives at the house to buy Bo Peep (Annie Potts). Woody attempts another rescue. She stops him, and, before she leaves, she reminds him that it’s in the nature of a toy to eventually be taken away.

Time passes. Andy grows up. He donates Woody, Buzz Lightyear (Tim Allen), Jessie (Joan Cusack), and the rest of the gang to the toddler Bonnie, and the cycle of toys continues. Woody thinks he’s got it all figured out, until Bonnie’s first day of kindergarten. Utilizing various bits of trash, Bonnie builds a new toy and unwittingly breathes life into Forky (Tony Hale). Bonnie loves her bizarre creation, so much so that she writes her name on Forky’s feet. However, Forky doesn’t view himself as a toy. He thinks he’s trash, and he thinks the fulfillment of his purpose involves repeatedly hurling himself into the nearest trash receptacle. 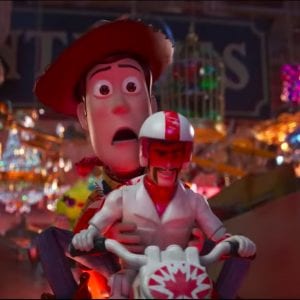 The situation becomes more complicated when Bonnie’s family packs the toys into an RV for a road trip. Woody and Forky are separated from the others, and while they make the trek back to the RV, the duo makes a couple of extremely surprising discoveries. The first is in the window of an antique shop, where Woody spies evidence of the long-gone Bo Peep. The second is Gabby (Christina Hendricks), a 1950’s-era doll who rules over the forgotten toys within the shop.

From there, we’ll have shenanigans involving rescues, nick of time escapes, and hilariously inappropriate moments where the toys reveal themselves to humans. We’ll meet new toys, including Ducky (Keegan-Michael Key) and Bunny (Jordan Peele), a pair of stuffies trapped at a fairground, and Duke Caboom (Keanu Reeves), a motorcycle-riding toy who views himself as Canada’s Greatest Stuntman. We’ll also experience some highly existential questions that would feel right at home in a college philosophy course.

Does Toy Story 4 really need to exist? If you wanted to be cynical, you might say there are approximately $1.9 billion reasons, the amount of money made by the preceding three films. You could also note that Toy Story 3 tied up the series in a neat bow, bringing things full circle while also showing moments of real emotional change and honesty—all in what some would refer to as a “kid’s movie.”

I kind of wanted to dislike the film, but it won me over. Director Josh Cooley has been involved with Pixar since 2004. This is his first feature-length film, and he’s learned the lessons of great filmmaking. With a 100-minute runtime, there isn’t a single minute that felt overlong to me. Cooley’s control is impressive. He knows when the film needs to sprint, and when it needs to slow down for us to hang out with the characters. He’s made a very good film that only feels the slightest bit superfluous. 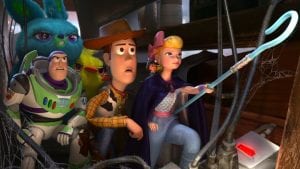 The story and screenplay is written by a battalion of eight writers, including relative newbie Stephany Folsom and O.G. Pixar screenwriter Andrew Stanton. A whole bunch of screenwriters* is usually a bad sign for the quality of a project. Luckily, the screenplay here is outstanding. While many animated features are highly plot driven, Toy Story 4 takes the time to explore ideas and concepts. What does it mean to be a lost toy, and is it necessarily a bad thing? What happens when the path you’ve been on for your whole life changes? Good screenwriting allows characters to change while simultaneously having something to say. This is an excellent screenplay, as it provides meaty character work and subtext along with a narrative that’s genuinely fun.

If you’ve ever seen a Toy Story film, then you know exactly how the cast is. Instead of bored celebrities slumming it for an easy paycheck, Pixar demands a workout from their casts. This time out, Tim Allen has a little less to do, but he still mines some great moments with Buzz grappling with the notion of an “inner voice.” Instead, the dynamic shifts to Tom Hanks’ Woody and Tony Hale’s Forky. Hanks gives a strong performance, and he balances out the sense of duty Woody lives with in terms of his kid along with the fact that Woody has always been a bit of a neurotic jerk. As Forky, Hale is hilarious, particularly his running gag of throwing himself into the garbage.

Standing out as an MVP in a film like this is tough, especially when you’re up against comedy masters like Keegan-Michael Key, Jordan Peele, Joan Cusack, and Kristin Schaal. There are two MVP’s here, and Annie Potts as Bo Peep is one of them. Her scenes with Hanks are the meatiest of the film, and we see that Bo has become tough and independent. She don’t need no stinkin’ kid, and that concept blows Woody’s mind. The other is internet darling Keanu Reeves as the goofball Duke Caboom. It’s a little bit of a one-joke character, but I like hearing Reeves get silly, particularly after his sturm und drang as John Wick.

Somebody out there is going to see Toy Story 4. They’ll take their kid, catch it on a date, or even duck in to check out the movie on their own. That person will hate it, and they’ll write a review that I’ll eventually stumble upon. If that’s you, I’m going to try like crazy to see where you’re coming from. There’s no wrong way to respond to a movie, and I’ll agree that Toy Story 4 isn’t perfect, it’s merely excellent. Is it too much of a good thing? Perhaps, but the fact remains that it’s still a good thing.

*A bunch of seagulls is a flock. What’s a group of screenwriters called? A sweat? A panic?

Tim Brennan
Tim has been alarmingly enthusiastic about movies ever since childhood. He grew up in Boulder and, foolishly, left Colorado to study Communications in Washington State. Making matters worse, he moved to Connecticut after meeting his too-good-for-him wife. Drawn by the Rockies and a mild climate, he triumphantly returned and settled down back in Boulder County. He's written numerous screenplays, loves hiking, and embarrassed himself in front of Samuel L. Jackson. True story.
Tagged: andrew stantonannie pottschristina hendricksjosh cooleykeanu reevesstephany folsomtim allentom hankstony haletoy story 4
OnColoradoSprings.com is a locally-owned and operated directory and information guide for Colorado Springs Colorado
Discover the best of Colorado Springs shopping, restaurants, night life, breweries, events, business, outdoors, fun, local life, real estate, transportation, jobs, and schools.
Looking for what to do in Colorado Springs? OnColoradoSprings.com has columnists, and bloggers to keep you up to date on the best of Colorado Springs, Colorado.