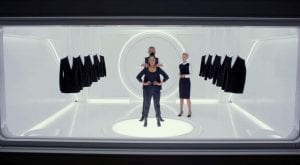 Let’s say you get the idea stuck in your craw that you wanted to write or direct a summer blockbuster. To do that, you’ll want to study the best of the best. What you don’t want is something stupid, cynical, or pandering.

Look, I get it. For many of us, the summer movie season is a nightmare. We’re ritually bludgeoned with special effects, broad humor, and cloying animation. Ask the average filmgoer, and they might tell you that summer movies aren’t even intended to be good. They exist to move a franchise forward or sell toys. The average filmgoer might even think that an entertaining movie must be, by necessity, dumb as hell.

Not so much! A summer blockbuster should be fast, smart, and fun, and the platonic ideal of summer movies can only be 1997’s Men in Black. The film intelligently delivers creative action, a sly sense of humor, a distinct point of view, and two instantly iconic performances from Will Smith and Tommy Lee Jones—all at a fleet running time of 97 minutes.

Unfortunately, the law of diminishing returns affects all franchises.* Men in Black II sucked. Men in Black 3, despite a hilarious performance from Josh Brolin as young Tommy Lee Jones, was only kinda okay. That blazing streak of mediocrity continues with the latest installment, Men in Black: International.

In order to temper your expectations appropriately, you will not be seeing Mr. Jones or Mr. Smith this time around, except for a brief Easter Egg portraying their likenesses. Instead, we’re introduced to Agent H (Chris Hemsworth), and his mentor High T (Liam Neeson), as they beat back an intergalactic incursion at the Eiffel Tower. 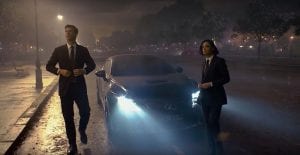 We then flash back twenty years earlier to Molly (Mandeiya Flory), a young girl living in Brooklyn with her parents. She encounters something that’s not of this world, and, as per frickin’ usual, two serious guys in dark suits arrive and wipe the memory from the noggins of her parents. Only they overlook her.

Time passes as we flash forward to the present, and the adult Molly (Tessa Thompson) is still grappling with what she’s seen. She knows two things for certain: there are aliens walking amongst us, and there is an extraordinarily secretive organization that polices them. She wants in.

A little persistence and a lucky break later, she’s sitting in front of Agent O (Emma Thompson), the head of the New York bureau of Men in Black. Literal seconds after that, Molly has completed training. Now known as Agent M, she’s on her first assignment. O tells her to head to the London branch, as “something” is wrong. 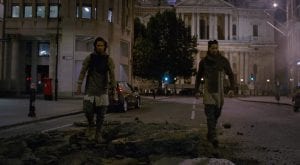 What’s wrong, you might well ask? Agent H has become wildly irresponsible, which his rival Agent C (Rafe Spall) delights at pointing out. His goofballery is ill-timed, considering that there’s a cosmically-powered doodad on Earth, a bunch of cosmically-powered baddies after it, and there just might be a mole in the MiB. You can see how that would be inconvenient.

We’re living in the 21st century. Our civilization has put men on the moon, nearly wiped out diseases like measles, and created the internet. Can someone please develop an app that, when a studio executive wants to develop an unnecessary sequel, a big digital fist punches them in the face? Highlander is good fun, yet it hasn’t benefitted from having a bunch of crummy sequels. The same goes for the Men in Black franchise.

Part of the reason the original works so well is the bizarre point of view from director Barry Sonnenfeld. This time out, F. Gary Gray directed. Don’t get me wrong, I like him quite a bit as a filmmaker. The Negotiator is still an absolute banger,** and Set It Off is an unfortunately forgotten gem. But he’s not the right guy for this particular film. Instead of the puckish sense of humor found in the original, Gray has made a film that’s slick and fast-paced. He doesn’t linger on the weirdness of the aliens; instead, he’s more focused on a globetrotting caper that feels a bit like an audition reel for Chris Hemsworth as James Bond. Gray is undeniably talented, but his sensibilities don’t mesh well here.***

The script really ought to be better, since it was written by Iron Man writers Matt Holloway and Art Marcum.**** The dialogue should pop, yet it consistently feels forced. A subplot regarding the mole in MiB is never properly developed and it feels far too obvious. This series should be an excuse for creators to go nuts. Is studio timidity the reason the script feels so conservative? I can’t say, but despite some fun moments, it certainly feels like a missed opportunity.

Speaking of missed opportunities, let’s talk about the cast a bit. We have Chris Hemsworth playing a charming schmuck again. His role in the 2016 reboot of Ghostbusters was the best thing that could have happened to him since it showed audiences that he has a real gift for daffy comedy. As well utilized as that gift was in Thor: Ragnarok, it feels like Hemsworth is coasting here. A sharper script would have more fully utilized his talents. The same script also lets down Tessa Thompson as Agent M. Take a little time and watch her in Dear White People, and you’ll see a performance that’s funny, smart, and absolutely ferocious. It’s so disappointing to see an actor that talented let down so profoundly. The crackling chemistry Thompson and Hemsworth shared in Ragnarok is long gone here. I’ve nearly forgotten, we also have Liam Neeson playing a very Liam Neeson-esque role, Kumail Nanjiani voicing an annoying sidekick, a living chess piece, and Rebecca Ferguson having fun in a small role as a three-armed arms dealer.

Men in Black: International, I’m not angry with you. I’m just disappointed. If you’re going to do a sequel to one of the best blockbusters ever made, you need to give it your A-game. We didn’t get a film on par with the original. Hell, we didn’t even get Tommy Lee Jones interrogating a pug. What we got is a film that’s fun in the moment, yet afterward feels designed to be forgotten.

*Yes, even the seemingly invincible Marvel Cinematic Universe. Sooner or later, they’ll produce a film that makes viewers collectively say, “Guys, let’s pump the brakes on this superhero thing for a while.”

**Though it’s a little tough dealing with Kevin Spacey these days.

***Just like they didn’t mesh well in his film Be Cool, a very bad movie that’s a sequel to the very good Get Shorty.

****Though we should give them a pass, as they also wrote the enjoyably bananas Punisher: War Zone.

Tim Brennan
Tim has been alarmingly enthusiastic about movies ever since childhood. He grew up in Boulder and, foolishly, left Colorado to study Communications in Washington State. Making matters worse, he moved to Connecticut after meeting his too-good-for-him wife. Drawn by the Rockies and a mild climate, he triumphantly returned and settled down back in Boulder County. He's written numerous screenplays, loves hiking, and embarrassed himself in front of Samuel L. Jackson. True story.
Tagged: art marcumchris hemsworthemma thompsonf gary graykumail nanjianiliam neesonmatt hollowaymen in black internationalrebecca fergusontessa thompson
OnColoradoSprings.com is a locally-owned and operated directory and information guide for Colorado Springs Colorado
Discover the best of Colorado Springs shopping, restaurants, night life, breweries, events, business, outdoors, fun, local life, real estate, transportation, jobs, and schools.
Looking for what to do in Colorado Springs? OnColoradoSprings.com has columnists, and bloggers to keep you up to date on the best of Colorado Springs, Colorado.