Home » Articles » Movies » We Need to Talk About Kal-El

We Need to Talk About Kal-El

As a human being, I have the ability to hold two completely contradictory ideas in my noggin at the same time. The first idea is that I love superheroes. They’re part of a genre that’s remarkably malleable, and with a bit of creativity, you can tell virtually any kind of story with them. The second idea is that, if superheroes truly existed, they would be terrifying.

Let’s talk about Batman, for example. In movies, comics, and other media, he’s a relentless crusader. A protector of the innocent. He’s a hero—one of the good guys. One of his defining attributes is that he always knows what he’s doing. But what if he didn’t?

Imagine reports coming out of Denver neighborhoods* of a man dressed as a bat assaulting people. According to eyewitness accounts, the “Bat-Man” seems to be targeting alleged criminals and kicking the absolute crap out of them. What if they aren’t criminals, but simply a poor person or some luckless dude caught in the wrong place at the wrong time? What about their civil rights or due process? What if this vigilante decides that the real criminals are people of color, or Republicans, or those in the LGBT community?

You can see how that would be a problem. Consider how much damage a highly trained, yet “normal” person could do. Now, imagine someone with some serious superpowers and an alarming lack of morality. There’s a great movie to be made about that. Unfortunately, the new film Brightburn doesn’t fully deliver on that berserk concept. 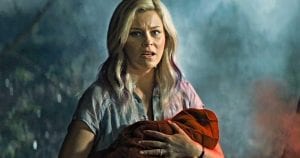 We meet Tori Breyer (Elizabeth Banks) and her husband Kyle (David Denman), residents of the sleepy Kansas town of Brightburn. They desperately want a baby, and the bookshelves groaning with books about fertility tell us their plans aren’t going well. Things change when it arrives.

“It” is an alien spacecraft. Inside is a baby boy, or something that looks an awful lot like a baby boy. In a way, the prayers of Tori and Kyle have been answered. They take the tot in and name him Brandon. For 11 years, the Breyer family is happy. But things change even more for Brandon (Jackson A. Dunn) in the days before he turns 12. He discovers he’s strong—far stronger than a boy of his age should be.

He also discovers that something is calling to him in an alien language, something hidden in the basement of the family barn. The message he’s receiving is disturbingly simple: take the world. He just might have the means to do that with a host of emerging powers, including flight, speed, invulnerability, and heat vision.

So how are Tori and Kyle responding to all of this? Like the majority of parents, their blinders are firmly in place when it comes to the actions of their child. When their chickens are mysteriously killed, when Brandon’s unrequited crush Caitlyn (Emmie Hunter) has her hand shattered, and when Brandon starts spouting off about superiority, their blinders may have to come off with a quickness before it’s too late. 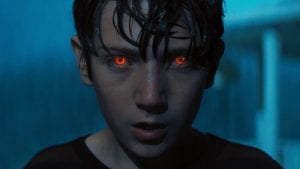 Allow me to state the obvious up front: Brightburn is “What if Superboy was forced into a telepod with the kid from The Omen?” As ideas for a movie goes, that’s a pretty good one. Flights and tights are very much a thing right now, and the right kind of deconstruction of the superhero mythos could be perfectly timed and fascinating. For example, the character of Rorschach in Alan Moore and Dave Gibbons Watchmen begins as your standard urban vigilante. We discover that, instead of an upstanding costumed hero, he’s a violent maniac who would feel right at home at an alt-right rally. That characterization tells us that superheroes can become a vehicle for fascism—and disturbingly quickly. 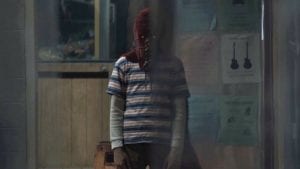 Brightburn wants to do that. It wants to put us into the headspace of what looks an awful lot like a superpowered incel. Too often, however, director David Yarovesky leans into standard horror tropes instead of focusing on psychological examination. Brandon lurks in the shadows wearing a weird-ass mask, then disappears/reappears at just the right moment. People are killed in spectacularly gory ways. Still, I have to give Yarovesky credit, since he only had a $7 million budget to work with, and he made a film with decent pacing and a subtle feeling that the town of Brightburn is in an irrevocable economic decline.

James Gunn of Guardians of the Galaxy fame produced, and his clout is probably why the script written by his brother Brian Gunn and cousin Mark Gunn was utilized. Their screenplay drove me nuts, because while we have some fairly creative moments of horror and okay-ish character beats, it’s massively overshadowed by their characterization of Brandon. For a story about an evil Superboy to work, we need to get into his head and understand why he’s rejecting goodness. Here, Brandon is called by the spaceship, then he basically goes from zero to serial killer in 0.5 seconds. Why? Is his alien heritage activated somehow? Is he a product of toxic masculinity? Is he simply born “bad” like the eponymous title character in We Need to Talk About Kevin? We never find out, and that problem is fatal.

All is not lost, since we have a mostly okay cast with one incredible standout we’ll get back to. Everyone is pretty decent. I liked David Denman as Kyle, and enjoyed his dawning realization that there was something severely wrong with his son. Speaking of his son, Jackson A. Dunn does fairly good work with a very tough role. Playing a budding psychopath who’s repressing a host of vile emotions isn’t easy for anyone, much less a child actor. Dunn tries his best, and he occasionally succeeds in showing us the black chasm hiding behind his face. 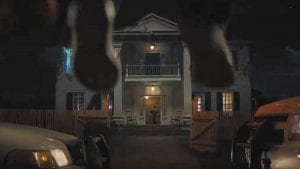 The aforementioned standout in the cast is the outstanding Elizabeth Banks as Tori. It feels like Banks has been around forever and proved she can do essentially anything. Here, she’s playing a mom forced to come to terms with the fact that her beloved boy might be seriously off. Banks realistically plays warmth, humor, concern, unease, and finally nerve-shredding terror. Her performance feels organic, and she’s much better than the material.

Movies like Kick-Ass, Watchmen, and Super have examined how screwed-up long underwear types would likely be. Brightburn wants to do the same thing, but a frustrating script and uneven direction prevents that from happening. David Yarovesky’s direction got my attention, and I think he could make something incredible with a strong script. I can’t completely recommend Brightburn, but if you’re going to come for the supermurder, you should stay for a strong Elizabeth Banks performance.

*In all seriousness, Denver had its own real-life costumed vigilante. You can read more about the Wall Creeper here.

Tim Brennan
Tim has been alarmingly enthusiastic about movies ever since childhood. He grew up in Boulder and, foolishly, left Colorado to study Communications in Washington State. Making matters worse, he moved to Connecticut after meeting his too-good-for-him wife. Drawn by the Rockies and a mild climate, he triumphantly returned and settled down back in Boulder County. He's written numerous screenplays, loves hiking, and embarrassed himself in front of Samuel L. Jackson. True story.
Tagged: brian gunnbrightburndavid denmandavid yaroveskyelizabeth banksemmie hunterjackson a dunnmark gunn
OnColoradoSprings.com is a locally-owned and operated directory and information guide for Colorado Springs Colorado
Discover the best of Colorado Springs shopping, restaurants, night life, breweries, events, business, outdoors, fun, local life, real estate, transportation, jobs, and schools.
Looking for what to do in Colorado Springs? OnColoradoSprings.com has columnists, and bloggers to keep you up to date on the best of Colorado Springs, Colorado.