In order to understand Pokémon: Detective Pikachu, you need to understand a couple of startling facts. First, let’s explain what Pokémon actually is. Created in 1995, this Japanese franchise concerns itself with a world overflowing with what are known a 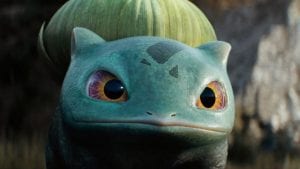 s pocket monsters. Folks known as trainers must capture different species of Pokémon, which are weird critters that have fantastic powers. From there, they do battle with other trainers to become a champion.*

You probably know this, but Pokémon is massive. 807 distinct species of the titular beastie have been created so far, and they appear in video games, anime series, films, manga, and other assorted merchandise.** To paraphrase Joe Biden, Pokémon is a big deal.

But maybe it isn’t. On the one hand, while I’m aware of Pokémon, it’s not exactly my thing. On the other hand, I certainly won’t sit here and sneer at the concept, because I’m a grown man who gets emotionally involved with the characters of the MCU. Not everything is for everybody, and that’s completely okay. 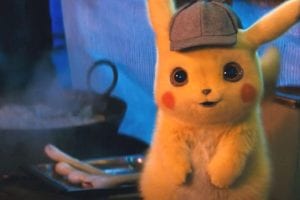 For the people who are into pocket monsters, they are going to lose their damn minds at Pokémon: Detective Pikachu. It clears a hilariously low bar to become the best movie based on a video game ever made. Plus, if you’re a parent like me that couldn’t tell the difference between a Snorlax and a Litten, it provides a reasonably okay time at the movies.

Tim Goodman (Justice Smith) is miles away from living his best life. He’s in his early 20s, has already given up on pursuing a worthwhile life, and has taken a job as an insurance adjuster. In a world overflowing with Pokémon, he’s pretty much over it. You can’t blame him, considering he’s estranged from his father.

His pops is a cop who works in Ryme City, a metropolis where humans and Pokémon work together peacefully. In the past, Pokémon were trained to fight each other in massive arenas. Tech genius Howard Clifford (Bill Nighy) saw a future where the two species*** could live and work together comfortably.

The plot kicks into gear when Tim is notified his father is killed in a car crash. He travels to Ryme City to get the details. Naturally, he gets more than he bargained for when he encounters his father’s Pokémon partner Pikachu (Ryan Reynolds). Ordinarily, Pokémon communicate by repeating variations of their names. This one is a little different, and not only can Tim understand him, but he also sounds exactly like Deadpool.

Pikachu survived the car crash, which left him with amnesia. All he knows is that a) he’s a detective, b) Tim’s father might still be alive, and c) he’s compelled to be a raging wisenheimer. Tim and Pikachu reluctantly team up to get to the bottom of the mystery. Along the way, they encounter an enthusiastic wannabe journalist (Kathryn Newton), Howard Clifford’s seemingly sinister son (Chris Geere), and a metric ton of weird Pokémon doing weird Pokémon things. 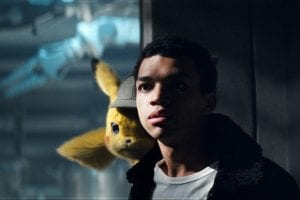 At this point in the review, I’d usually break down the direction, the writing, the acting, and attempt to wrap it all up in a tidy bow. This time, we’re doing things a little differently. First, I’ll give the parents and non-Pokémon enthusiasts a quick overview so that you can prepare yourselves appropriately. Then, my kid will be coming in. He’s a Pokémaniac, if you will, and he’ll deliver some thoughts from the perspective of a kid and a fan.

While the script by Rob Letterman, Dan Hernandez, Benji Samit, Nicole Perlman, and Derek Connolly is pretty thin, the film itself has three not-so-secret weapons. The first is Letterman, who also directed. He’s made a film overflowing with fan service and stuff to look at. Greninjas fling throwing stars at our heroes, Charizards blow fire, and Mewtwo hovers over the action like a remote deity. Every couple of minutes, a thing happens, and I recommend treating it all like you’re a Pokémon tourist. It’s okay if you have no idea why a Psyduck explodes if it gets stressed out; just think of it as Mutual of Omaha: Kanto Region.

The second and third weapons are Justice Smith and Ryan Reynolds. As Tim, Smith is an engaging and likable presence. Most of his job is to be amazed at the wild stuff happening around him. There are a few moments that require fairly sizable emotional lifting, and Smith handles them with ease. As far as Reynolds is concerned, he’s doing his regular schtick playing a motormouth. His Pikachu is essentially Deadpool without the rampant profanity and fourth-wall breaks. I’m totally fine with that since Reynolds is good at that kind of thing. The guy is talented and genuinely can act, he just doesn’t need to flex that in a big way here.

Let’s be real, though. If you’re a fan, literally none of what I’ve written will really matter. That’s why I’ll step out of the way and allow my kid a moment to offer his thoughts:

So, you want to talk some Pokémon, do you? Since you got this far in the review, I’m assuming yes. Pokémon is a world where dreams are born and where you enslave animals to fight against other animals to the death! It’s a vibrant world, with it being very apparent as soon as the movie starts. Justice Smith’s character, Tim, makes that very obvious because his philosophy is that he doesn’t need a Pokémon. Pokémon are also used as a sign of status, and Tim’s isn’t very high. But the most thought was put into the Pokémon themselves. The CGI is amazing, and the Pokémon look as if they are real! You see a Flareon, a Lickitung, and a Psyduck with their abilities helping move the plot. Also, the fan service was everywhere. That’s about all I have to say, so back to the main review!

If you’re on the younger side or a lifelong fan of pocket monsters, Pokémon: Detective Pikachu will not disappoint you. It’s packed with enough fan service to give Avengers: Endgame a run for its money, and it’s a strong starting point for a live-action franchise. If you’re a parent or someone who’s curious about this whole thing, you’re going to be fine. The film is anchored by a couple of fun leading performances. Better yet, the movie itself is only an hour and 45 minutes long. Trust me, you can make it.

*It’s basically about people enslaving animals and forcing them to do battle for the amusement of others. Why isn’t the ASPCA on this?

**Including a Pikachu cloth diaper, a “tobacco” pipe, and a full-body spandex Lucario suit which looks like it would be right at home on an episode of Hannibal.

***But are Pokémon really a species? Going further, do Pokémon replace animals in this world. Are there cats and cat-Pokémon, or have the cat-Pokémon taken their place? The mind boggles.

Tim Brennan
Tim has been alarmingly enthusiastic about movies ever since childhood. He grew up in Boulder and, foolishly, left Colorado to study Communications in Washington State. Making matters worse, he moved to Connecticut after meeting his too-good-for-him wife. Drawn by the Rockies and a mild climate, he triumphantly returned and settled down back in Boulder County. He's written numerous screenplays, loves hiking, and embarrassed himself in front of Samuel L. Jackson. True story.
Tagged: benji samitbill nighydan hernandezderek connollyjustice smithkathryn newtonken watanabenicole perlmanpokemon detective pikachurob lettermanryan reynolds
OnColoradoSprings.com is a locally-owned and operated directory and information guide for Colorado Springs Colorado
Discover the best of Colorado Springs shopping, restaurants, night life, breweries, events, business, outdoors, fun, local life, real estate, transportation, jobs, and schools.
Looking for what to do in Colorado Springs? OnColoradoSprings.com has columnists, and bloggers to keep you up to date on the best of Colorado Springs, Colorado.