Home » Articles » Movies » When Everything Works

I don’t know if you guys knew this, but Hollywood is kind of shallow. If you’re a woman, regardless of your talent, intelligence, or drive, an awful lot of people are going to base their first and last impressions of you on your looks and body type. How many wildly talented women never got their shot because they didn’t wear a size zero? 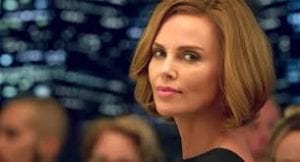 Take Charlize Theron for example. Impossibly attractive, she was first noticed in 1996’s 2 Days in the Valley.* For several years, she appeared in a string of forgettable films. She took a risk in 2003 playing serial killer Aileen Wuornos in Monster. The role won her a well-deserved Academy Award, and her career changed radically. Why? Theron lit her image on fire by playing the unattractive Wuornos, and that weirdly enabled the film industry to take her seriously as an actor. She was always that talented, but something drastic had to be done.

It sucks, but let’s be real — the entertainment industrial complex can be mean to the guys, too. Take a look at the movie poster for 2007’s Knocked Up. It features a close-up shot of a schlubby-looking Seth Rogen and the tag line, “What if this guy got you pregnant?” Think about the casual cruelty on display. Despite that, Seth Rogen became a star, and he’s been able to build a career partially upon the foundation of that image.

Even now, in the age of #MeToo and body positivity, that shallowness still persists. The movie poster for Long Shot, starring Theron and Rogen, shows the two of them with the tagline, “Unlikely but not impossible.” It’s a real pity that, for a strong romantic comedy about two people falling for each other and getting past inaccurate images, the advertising has all the depth of a puddle. 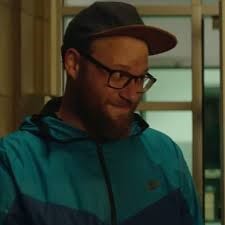 We’re introduced to Fred Flarsky (Rogen), a crusading journalist at an alt-weekly. He’s infiltrated an online White Power group, and he takes his job so seriously that he’s willing to get a tattoo of a swastika. The truth matters deeply to Fred. That’s why it comes as such a shock to learn that his alt-weekly has been bought by Parker Wembley (Andy Serkis), a conservative media titan. Does he try to change things from within? Hell, no. He quits.

Fred’s pal Lance (O’Shea Jackson Jr.) gets it, and he takes Fred out on the town to drown his sorrows. They arrive at a glitzy fundraiser, where Fred sticks out like the sorest of sore thumbs. Perhaps that’s a good thing, since he attracts the attention of Charlotte Field (Theron). She remembers Fred. She was his babysitter, and she was significantly more passionate about the world then. Charlotte is also the Secretary of State under the narcissistic President Chambers (Bob Odenkirk), and she has a plan.

A former TV actor, Chambers has decided he won’t seek a second term, and instead wants the added prestige of becoming a movie star. But Chambers isn’t done yet, and it’s Charlotte’s job to travel the world gathering support for a massive environmental policy proposal. She sees an opening to use it as a springboard to launch her own campaign for president. While Charlotte polls well with voters, they feel she’s too stiff. 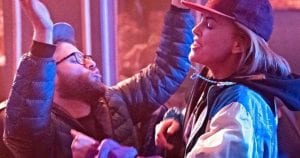 Running into Fred gives her another idea, and she offers him a job punching up her speeches. As they travel the globe, they get to know each other. He helps her to relax. She helps him to broaden his perspective on the world. They do drugs together. While something seems to be growing between them, Charlotte’s aide Maggie (June Diane Raphael) thinks it’s nothing more than a fling that needs to end as soon as possible. Are these two really falling in love?

There are two flavors of romantic comedy I dislike intensely. The first is “schlubby dude grows up and learns a lesson,” while the second is “they bicker continuously until they magically fall in love.” Let’s also bear in mind that many, many romantic comedies are neither particularly romantic nor particularly funny. Imagine how thankful I was that Long Shot gracefully sidesteps those hoary old tropes and is both funny and genuinely affecting.

Director Jonathan Levine has a particular talent for drilling into a particular genre while never forgetting that what we really care about is the relationships between the characters. In The Night Before, he made a genuinely funny comedy that examined how friendships are affected by time. His film Warm Bodies was a solid slice of zombie horror that has an unapologetically romantic worldview.

Here, he’s made a rom-com that nicely balances real emotion with some satisfyingly filthy humor. I appreciated that Charlotte’s function isn’t to help Fred become a grown-up. He’s already a successful journalist. The best relationships are ones where both parties complement each other. Charlotte helps Fred take his writing to the next level and expands his worldview. He helps her to look beyond her job, yet remains supportive of what she’s focusing on. Not only are they falling for each other, we see that they genuinely like each other.

As wonderful as it is to see two people fall in love, it’s just as wonderful that there’s an abundance of dick jokes. Dan Sterling and Liz Hannah have absolutely crammed their screenplay full of hilarious moments. They also know that humor can be used in different ways depending on the needs of the scene, and we see some moments played as straight comedy while also showing some lovely moments between two naturally witty people. That kind of balance isn’t easy to pull off, but Hannah and Sterling have done it here.

Rom-coms live or die based on the chemistry of the leads. Theron and Rogen have some honest-to-God, you-can’t-fake-this chemistry together. Over the years, Rogen has occasionally dipped his toe into more dramatic fare. While he’s playing a wiseassed stoner yet again, he’s gotten better as a performer and he can sell dramatic moments quite a bit better. As good as he is, Theron is absolutely outstanding. She doesn’t often get the chance to be funny, and she nails it. There’s a sequence where she’s asked Fred to get her extremely high. While she’s tripping balls, an international catastrophe occurs that she has to deal with. Watch her command of physical comedy and her ability to be funny and broad without going too big. At this point, I think Theron can basically do anything.

Long Shot isn’t perfect. At a little over two hours, it starts to wear out its welcome, and 15 minutes or so could have been comfortably trimmed. Yet that kind of criticism feels a little like nitpicking. Why should I look for flaws in something that made me so happy? Long Shot is more than just a dopey poster and a seemingly wheezy concept. You may not want to deal with the Avengers crowds right now, but trust me that this film is worth seeking out.

*Yet her acting debut in Children of the Corn III: Urban Harvest remains ignored? For shame!

Tim Brennan
Tim has been alarmingly enthusiastic about movies ever since childhood. He grew up in Boulder and, foolishly, left Colorado to study Communications in Washington State. Making matters worse, he moved to Connecticut after meeting his too-good-for-him wife. Drawn by the Rockies and a mild climate, he triumphantly returned and settled down back in Boulder County. He's written numerous screenplays, loves hiking, and embarrassed himself in front of Samuel L. Jackson. True story.
Tagged: alexander skarsgardandy serkisbob odenkirkcharlize therondan sterlingjonathan levinejune diane raphaelliz hannaho'shea jackson jrseth rogen
OnColoradoSprings.com is a locally-owned and operated directory and information guide for Colorado Springs Colorado
Discover the best of Colorado Springs shopping, restaurants, night life, breweries, events, business, outdoors, fun, local life, real estate, transportation, jobs, and schools.
Looking for what to do in Colorado Springs? OnColoradoSprings.com has columnists, and bloggers to keep you up to date on the best of Colorado Springs, Colorado.