Home » Articles » Movies » The End Is The Beginning

The End Is The Beginning

“A thing isn’t beautiful because it lasts.” That quote comes from the under-loved Avengers: Age of Ultron. Upon its 2015 release, we were 11 films deep and there were two schools of thought about the Marvel Cinematic Universe, a sprawling epic of interconnectivity.

Eager nerds like myself were excited. Comic book creators and imagination machines like Jack Kirby, Stan Lee, and Steve Ditko used these characters, perhaps unwittingly, as a kind of modern mythology. There were lessons of tolerance, justice, decency. You could take something of real value away from the adventures of a bunch of people running around in spandex.

The other school of thought was a kind of horrified fascination. You might have a very real feeling of superhero fatigue, and if so, I pity you, because Marvel movies ain’t going away any time soon. Estimates vary, but there are at least 7,000 characters in the Marvel Universe alone. That’s the bad news. The worse news is that, as a franchise that’s earned billions, the MCU is a cinematic Terminator. It can’t be bargained with. It can’t be reasoned with. With its legions of characters, it will go on. When the heat death of the universe approaches, someone somewhere will be getting excited for a trailer for Moon Girl and Devil Dinosaur.*

But what difference does it make if the MCU continues, yet the quality sucks? Sooner or later, Marvel Studios is going to release something bad. Something that makes us cast our eyes fondly back at the not-good Iron Man 2 or the stunk-up-the-joint Thor: The Dark World. When that happens, I recommend closing your eyes and finding your happy place. That place being Avengers: Endgame.

We pick up where Avengers: Infinity War left off, with a snap. The finger snapping belongs to the Mad Titan Thanos (Josh Brolin). Why is he mad? Welp, he collected the Infinity Stones, artifacts of limitless power scattered throughout the cosmos. Brought together, the Stones grant the wielder control over the fundamental forces of the universe. Thanos’s plan is to cull fifty percent of all life, allowing the other fifty percent to live in comfort and prosperity. 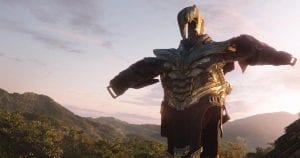 His plan worked perfectly, and The Decimation** happened. After that, does Thanos lord over the rest of the universe as a conqueror? No. He retires to a small planet, hangs up his armor for use as a scarecrow, and becomes a farmer. In his own way, Thanos is content.

Things back on Earth are considerably less content considering billions of people were dusted out of existence, including a number of the mighty Avengers. The survivors are, by and large, not doing awesome. Captain America (Chris Evans) and the Black Widow (Scarlett Johansson) lead efforts to try and put the pieces back together. Tony Stark (Robert Downey Jr.) and the cyborg assassin Nebula (Karen Gillan) are trapped within deep space in a starship that’s low on fuel.

Thor (Chris Hemsworth) grapples with his failure to definitively kill Thanos when he had the chance, while Hawkeye (Jeremy Renner) the marksman grapples with general existential horror. Only Bruce Banner (Mark Ruffalo) has achieved a kind of balance. It seems that they have no choice but to move on. Then the astonishing Ant-Man (Paul Rudd) comes calling. He has an idea, one that’s definitely crazy, and that just might be a game-changer. 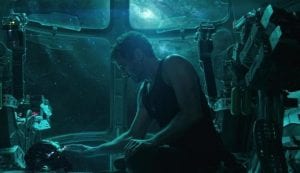 From there, we have triumphs, tragedies, narrow escapes, thrilling heroics, and fan service, all in a bladder-punishing three hour run time. Avengers: Endgame is a very real achievement, and one that even serial dislikers of the MCU should pay grudging respect. Does this all mean that Endgame specifically and the MCU, in general, should be placed on a cinematic pedestal next to films like The Godfather? No, and it shouldn’t be.

However, we dismiss the skill it takes to craft a well-made blockbuster at our peril. Directors Anthony and Joe Russo have made a gargantuan epic where stuff gets blown up real good. Their action scenes are muscular, and the special effects are, unsurprisingly, top-notch. They also made a film that has considerably more focus on a smaller cast and thematic elements than Infinity War. Even when massive action sequences are going on, the Russos never let us forget we’re watching a group of people dealing with failure in very personal ways. 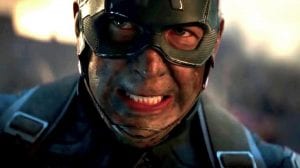 Screenwriters Christopher Markus and Stephen McFeely have been with Marvel Studios since nearly the beginning. Their script for Captain America: The First Avenger is one of the foundational elements of the MCU in terms of setting the entire tone. Their screenplay for Endgame is written with intelligence and wit. They don’t just start things off with a somber first act, transition into a wildly creative second act, and enter the third act with a scale and stakes that are huge. They also pay off character arcs and themes from other films, tying off the majority of the MCU’s concepts in a neat bow. In terms of the structure and creativity alone, it’s not hyperbole to suggest that their script is Oscar-worthy.

The cast makes a meal out of their script. If we talk about everyone, we’re going to be here forever, so I’ll focus on three performances of note. As Tony Stark, Robert Downey Jr. is the heart of the entire MCU. He began with a character who was casually selfish, and who learned a painful lesson about selflessness. Over a series of films, we’ve seen his character believably change. Here, that change achieves some touching grace notes. Downey has always been a talented performer, and when he lets real emotion escape from his armored shell of snark, he makes it look so natural and so easy.

If Downey is the heart of the MCU, then Chris Evans is the soul. He took a character that could be insufferable and made him a decent man who operates according to his principles. Whether it’s the Nazis or space warlords, Steve Rogers won’t tolerate bullies, but he never stoops to their level. It’s refreshing to see a character who does the right thing because it’s the right thing to do. 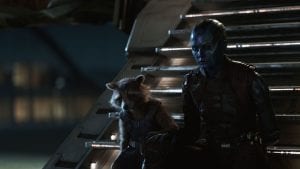 If you’re literally anybody else in the cast, how are you supposed to compete with these two? Karen Gillan as Nebula does it, and she does it covered in prosthetics and with a quietly intense performance. As one of the daughters of Thanos, we see a woman who’s suffered years of abuse, who only ever wanted to please her father, and who painfully sets herself on the harder path of finding her worth. The easy choice would be for her to have a big speech renouncing Thanos. Instead, Gillan uses subtle facial and vocal expressions, implying a seismic change within her without it becoming showy.

This era of the MCU ends with Avengers: Endgame. The MCU is far from over. If you wanted to tap out here, I wouldn’t blame you. It’s a good spot to close the book, and unlike a number of other franchises, Endgame sticks the landing.*** There’s a beauty in its finality, something wonderful about when and how the period is placed at the end of the sentence. The MCU will go on, for good or ill, but we’ll always have this.

**Or The Snapture, if ya nasty.

***So much so that there isn’t even a mid or post-credits scene.

Tim Brennan
Tim has been alarmingly enthusiastic about movies ever since childhood. He grew up in Boulder and, foolishly, left Colorado to study Communications in Washington State. Making matters worse, he moved to Connecticut after meeting his too-good-for-him wife. Drawn by the Rockies and a mild climate, he triumphantly returned and settled down back in Boulder County. He's written numerous screenplays, loves hiking, and embarrassed himself in front of Samuel L. Jackson. True story.
Tagged: anthony russochris evanschris hemsworthchristopher markusjoe russokaren gillanpaul ruddrobert downey jrscarlett johanssonstephen mcfeely
OnColoradoSprings.com is a locally-owned and operated directory and information guide for Colorado Springs Colorado
Discover the best of Colorado Springs shopping, restaurants, night life, breweries, events, business, outdoors, fun, local life, real estate, transportation, jobs, and schools.
Looking for what to do in Colorado Springs? OnColoradoSprings.com has columnists, and bloggers to keep you up to date on the best of Colorado Springs, Colorado.