Some characters lend themselves to endless interpretations. Batman is one of them. Let’s say you’re planning to make a Batman movie, and by some miracle, you don’t have to attach it to an expanded universe or follow up on threads from a previous installment. Warner Brothers gives you a $90 million budget and sends you on your merry way. What kind of film should you make?

Lucky you, because you have options! Just a few of them might be:

Other characters don’t quite have that degree of flexibility. Sure, you could do a dark and gritty take on Superman,* but why would you want to? The right Superman story should be light and colorful, with a splash of science fiction and a drizzle of aspirational morality. You should walk out of that film feeling…well, like you can fly. 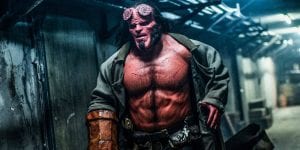 That brings us to Hellboy. Created by the wildly talented Mike Mignola, the character was well-loved yet fairly obscure. His comic book adventures have deep roots in pulp adventure, Gothic horror, and folklore. There was a pretty solid 2004 film and an even better 2008 sequel, both directed by Guillermo Del Toro and starring Ron Perlman. Years dragged on, creative differences were inflicted upon us, and it was decided that the character was ripe for reimagining. Ripe is certainly one way to put it with the reboot of Hellboy.

Rather unceremoniously, we’re dropped into Ye Olde England and right into the middle of a pitched battle between the noble King Arthur (Mark Stanley) and Nimue (Milla Jovovich), a supernatural blood queen with unholy designs upon the Earth. She has unleashed a plague upon the land, but thanks to the trusty blade Excalibur and an assload of special effects, the plague is stopped. Since fire was apparently not an option, Nimue is hacked to pieces, the pieces are placed in magically locked boxes, and the various boxes are hidden across the land where nobody will ever, ever find them.

From there, we fast-forward to the present, and we’re re-introduced to the demonic paranormal investigator Hellboy (David Harbour). As an agent for the Bureau for Paranormal Research and Defense,** it’s his job to deal with supernatural threats. His side gig is to have massive daddy issues, apparently, and boy does he ever! His adopted father is Professor Broom (Ian McShane), and to say the two have a somewhat fraught relationship would be an understatement.

As so often happens, the world is on the brink of destruction. Why? Remember the boxes crammed with the remains of Nimue that nobody would ever, ever find? Welp, it turns out the pig-beast Gruagach (Stephen Graham) is busy re-assembling her. Why is he doing that? While her head has been locked in a box for centuries, Nimue has devised a plan to enact vengeance upon humanity and stuff.

Hellboy must team up with Alice (Sasha Lane), a young woman who can channel the dead, and Major Ben Daimio (Daniel Dae Kim), a gruff soldier with his own secret. They will (takes deep breath) try to stop the apocalypse, deal with vampire luchadores, famished giants, the Baba Yaga, the corpse of Merlin, and learn the truth about Hellboy’s origins and destiny. Oh, and Lobster Johnson shows up. Don’t hold your applause, guys.

If you haven’t read Mignola’s original comics, you’re really missing out. His art is shadowy and moody, and he excels at creating a mood of creepy unease. Mignola’s Hellboy is a guy who’s literally seen it all, and whether he’s dealing with French werewolves or cyborg gorillas, he has a world-weary resignation about the whole thing. Add to that Mignola’s tight plotting and strongly researched lore, and you’re in for a treat. I mention all of that because while I was watching the 2019 film I desperately wanted to be at home with a good glass of whiskey and my nose in one of the Hellboy trade paperbacks. Instead, I had to watch this.

The film should work. Director Neil Marshall made the very good Dog Soldiers and The Descent, as well as a few episodes of Game of Thrones, so the guy clearly knows what he’s doing. He’s got a game cast, and the blessing of Mignola himself. Instead, we have a movie that too often feels like a charmless and repetitive slog. Hellboy goes to a place, has a conversation, fights a fiendish thingy, repeat. We get all of that with action scenes that are rarely inspired, editing that feels haphazard, and effects that look cheap.*** 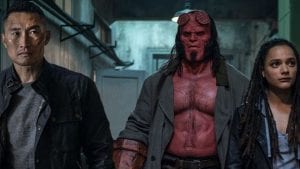 The screenplay by Andrew Cosby feels just as haphazard. The moody horror and wit from the comics are replaced by gore, copious f-bombs, and lame one-liners. Clichés are embraced with abandon, and clunky exposition plagues the story. To be fair, the production of this film was notably troubled, and there were 16 credited producers. I’d be willing to bet that Cosby wrote a draft that was pretty solid, and he became just the latest writer to have his script brutalized during production due to a group of people failing to work as a team.

Let’s also take a moment to consider the Deadpool-ization of Hellboy. When 2016’s Deadpool made close to $800 million, the lesson learned was that people like superhero movies with swearing and blood. The thing about that? It works for Deadpool, since it fits the interpretations of the character. It doesn’t work for Hellboy, and here it feels like a 15-year-old boy desperately trying and failing to be edgy. 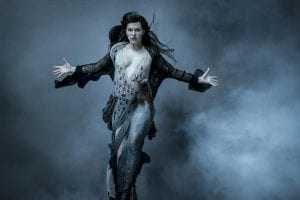 Ron Perlman’s film portrayal of Hellboy casts a massive shadow. With the right script and production, David Harbour might have equaled it. Burdened by both pounds of makeup and a lousy script, Harbour acts his ass off. It’s not enough, and it’s not his fault. He tries to show us the sensitive and conflicted interiors of Hellboy’s gruff exterior, but too often he’s just asked to make a lame joke, snarl, or punch something. As Nimue, Milla Jovovich seems to be the only member of the cast who could escape the production woes and deliver a performance that balances gothic horror and fine cheese.

When I heard that Del Toro and Perlman wouldn’t be able to finish their original trilogy, I was disappointed. Hollywood is littered with cinematic almosts. When I heard that Neil Marshall was making a film, with Mignola’s blessing that was meant to be closer in spirit to the comics, I hoped for a character piece where Big Red investigated the nameless horrors at a spooky old house. What we got is a failure from people who consistently deliver better work than this.

*We’re lucky that nobody has ever had an idea that bad and saw it through to its unfortunate conclusion.

**In this film, the BPRD is headquartered in Colorado. It makes me smile that, in movies like this, Colorado is depicted as being towering mountains everywhere always.

***How is it that, more than ten years later, the Hellboy makeup and prosthetics actually look worse than the 2004 and 2008 movies?

Tim Brennan
Tim has been alarmingly enthusiastic about movies ever since childhood. He grew up in Boulder and, foolishly, left Colorado to study Communications in Washington State. Making matters worse, he moved to Connecticut after meeting his too-good-for-him wife. Drawn by the Rockies and a mild climate, he triumphantly returned and settled down back in Boulder County. He's written numerous screenplays, loves hiking, and embarrassed himself in front of Samuel L. Jackson. True story.
Tagged: andrew cosbydaniel dae kimdavid harbourhellboyian mcshanemilla jovovichneil marshallsasha lane
OnColoradoSprings.com is a locally-owned and operated directory and information guide for Colorado Springs Colorado
Discover the best of Colorado Springs shopping, restaurants, night life, breweries, events, business, outdoors, fun, local life, real estate, transportation, jobs, and schools.
Looking for what to do in Colorado Springs? OnColoradoSprings.com has columnists, and bloggers to keep you up to date on the best of Colorado Springs, Colorado.