Home » Articles » Movies » The Flap of a Hummingbird’s Wing

The Flap of a Hummingbird’s Wing 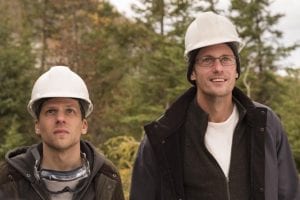 Roger Ebert once wrote, “…for me, the movies are like a machine that generates empathy. It lets you understand a little bit more about different hopes, aspirations, dreams, and fears.” That quote is something I keep returning to throughout the years since empathy allows us to drop into the lives of people that aren’t necessarily likable, yet we can still find a connection with them.

Empathizing with Captain America is easy. Empathizing with Hannibal Lecter, or Travis Bickle, or Annie Wilkes? That’s a little bit harder, and it requires some work on the part of the viewer. I know, the heavy lifting is on the side of the filmmaker, and that peculiar alchemy between script, actor, and director is necessary to present to us a character that’s compelling.

But, what happens when, through no fault of their own, an actor is really good at playing unlikable characters? Can that short circuit the empathy machine we’re talking about? Jesse Eisenberg is one of those actors. He was great fun in Zombieland as a nebbishy survivor in the zombie apocalypse. He was jaw-droppingly good in The Social Network as Facebook creator Mark Zuckerberg. And, in all fairness, he was appalling in Batman v. Superman: Dawn of Justice as twitchy archvillain Lex Luthor.

I’m sure that in reality Eisenberg is a perfectly good dude, and he comes off as perceptive and intelligent. Unfortunately, he excels at playing the kinds of men who seem to develop an aura of assholery.* These people have an elevated opinion of themselves and almost seem to revel in their churlish behavior. Eisenberg’s newest film is The Hummingbird Project where yes, he plays a mouthy creep, though not one lacking in empathy. 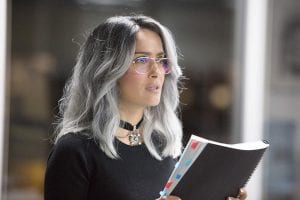 We’re dropped far back in time to the halcyon days of 2011. Eva Torres (Salma Hayek) is the ruthless head of a high-frequency trading firm. What is high-frequency trading, you might ask? Utilizing a high-speed algorithm, trades can be made with a value of a fraction of a cent. It doesn’t sound like much, but when you multiply that fraction by hundreds of shares and your algorithm performs trades thousands of times per day, then you’re talking real money–enough to build or break financial markets.

Vincent Zaleski (Jesse Eisenberg) works for Eva as a trader. Entitlement seems to be tattooed across his face, and he knows he’s destined for better things. His cousin Anton (Alexander Skarsgård) is a programmer at the firm. He’s brilliant, probably on the spectrum, and deeply unhappy being surrounded by what he views as his intellectual inferiors.

The Zaleskis have a plan: if they can lay a high-speed fiber optic cable from an electronic exchange in Kansas to a Wall Street data bank located in New Jersey, they can pick up a one millisecond advantage over Eva. That millisecond might not seem like much time, but it could mean hundreds of millions of dollars, financial freedom, and bragging rights for a highly embittered man.

Where it gets tricky? The cable has to be laid absolutely straight, otherwise, the speed advantage is lost. Vincent and Anton partner with drilling expert Mark Vega (Michael Mando), run a line of happy talk to secure funding from doubtful venture capitalist Bryan Taylor (Frank Schorpion), and try to screw over Eva before she can screw them over. That’s capitalism for you. 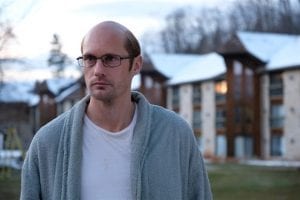 If I told you that The Hummingbird Project is a financial thriller that slings around terminology like “pulse-shaping microwave towers,” and I asked you if you wanted to see it, there’s a fair chance that you’d call 911. I get that! However, it’s a pretty good little movie with some strong performances.

Director Kim Nguyen has kind of made a “men on a mission” film, only instead of escaping Nazis or driving a truck full of nitroglycerin through the jungle, we have a group of smart people trying to lay cable in a perfectly straight line. That means situations such as negotiating property rights with the Amish, tramping through the woods, and figuring out how to get through a mountain. I found the minutia strangely absorbing, and when the movie cut away to deal with a hackneyed health scare or Anton’s cute-as-a-button family missing him, I felt the momentum drain away. The pacing often felt off to me, and there are numerous shots of gorgeous wilderness and the crews hacking their way through it. How are we meant to feel about that?

Remember the good old days of the George W. Bush Administration and the concept of truthiness, in which things felt true even if they weren’t factually accurate? Nguyen’s script feels highly truthy to me, which I mean as a compliment. He’s clearly done his homework, and I appreciated his ability to get the gist of financial terms and drilling concepts across to us. There are moments that feel preachy, particularly slow-motion sequences meant to warn us of the perils of too much speed in our lives. 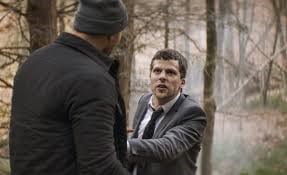 The cast is comprised of actors who know their strengths and lean into them. I enjoyed the dependable driller played by Michael Mando, particularly his scenes with the hyperverbal Eisenberg. Salma Hayek continues to be a criminally underappreciated actor, and as Eva she shades in subtle amounts of camp in her performance as a financial raider. Yet again, Jesse Eisenberg is playing a guy that’s a weapons-grade dick, but Eisenberg is a smart performer, and he never forgets to show us glimpses of why Vincent is the way he is. The most entertaining performance is an almost completely unrecognizable Alexander Skarsgård. As Anton he’s pudgy, balding, awkward, and nearly a caricature of a computer geek. There’s a moment where he’s pulled something off and he’s celebrating with a dance. When I saw it, I applauded.

Not every movie should be about likable people being likable. For long stretches of The Hummingbird Project, I was watching people that, if I were stuck next to them on a plane, I’d bribe the flight attendant to switch seats. Still, I understood who they were and why they were on a quest that’s insanely difficult and likely doomed to failure. If that’s not empathy, I don’t know what is.

*President Trump’s senior policy advisor Stephen Miller is one of those guys. I mean, just look at him.

Tim Brennan
Tim has been alarmingly enthusiastic about movies ever since childhood. He grew up in Boulder and, foolishly, left Colorado to study Communications in Washington State. Making matters worse, he moved to Connecticut after meeting his too-good-for-him wife. Drawn by the Rockies and a mild climate, he triumphantly returned and settled down back in Boulder County. He's written numerous screenplays, loves hiking, and embarrassed himself in front of Samuel L. Jackson. True story.
Tagged: alexander skarsgardjesse eisenbergkim nguyenmichael mandosalma hayekthe hummingbird project
OnColoradoSprings.com is a locally-owned and operated directory and information guide for Colorado Springs Colorado
Discover the best of Colorado Springs shopping, restaurants, night life, breweries, events, business, outdoors, fun, local life, real estate, transportation, jobs, and schools.
Looking for what to do in Colorado Springs? OnColoradoSprings.com has columnists, and bloggers to keep you up to date on the best of Colorado Springs, Colorado.