One of the most valuable things in life is honesty; particularly, the honesty of someone calling out your bad ideas. When someone cares about you on a personal or professional level, they’ll do their level best to pull you back from the brink. I cannot emphasize how important that is, but let me explain with my own idiotic example.

I do screenwriting on the side. Years ago, I was batting about script ideas with my writing partners. As we kicked around ideas, I was struck by the Bad Idea Fairy. “Guys, guys, so there were gold reserves in the sub-basements of the Twin Towers. What if, in the aftermath of 9/11, a group of thieves pose as rescue workers to try and get to the gold? Maybe one of them is struck with an ethical conflict and comes into conflict with the rest of his crew!”

Their response proved to me that, even now, they are true friends. “No. You absolutely shouldn’t do that. Not now, not ever. That’s not good.” What was I going to do, have an action-packed gunfight set in the wreckage of the World Trade Center? Thankfully, my friends exorcized the influence of the Bad Idea Fairy, and I endeavored to come up with less stupid concepts in the future.

Some people are more susceptible to the dark and wicked magics of the Bad Idea Fairy than others, and when they bring a vision to life that should not be they are to be pitied, not jeered. Worst of all is when someone genuinely talented is seized with a terrible concept and nobody stops them. Want proof of that? Steven Knight’s Serenity is showing in theaters now, but it won’t be for long.

We’re introduced to the amusingly named Baker Dill (Matthew McConaughey), a charter fishing boat captain dealing with a nasty case of depression. How do we know he’s depressed? He mutters darkly about his experiences as a soldier in Iraq. He smokes constantly, drinks nearly constantly, lives in a shipping container and dives naked into the ocean in lieu of taking a shower like a normal human being. He yells at the sky and threatens people with knives, but everybody gives him a pass because he looks like Matthew McConaughey.

His life isn’t completely terrible, because he’s got a first mate and trusty best friend in Duke (Djimon Hounsou, veering dangerously close to “Magical Black Man” territory). He’s also got Constance (Diane Lane) in his life, a gorgeous older woman who spends her days lounging in bed and paying him for sex. Yes, literally. She also spies on him through the slats of her windows and comments on his actions like a Greek chorus by way of The Graduate.*

I almost forgot to tell you: Baker is obsessed with catching a giant tuna that he’s named “Justice,” and he scrawls information about his attempts to catch it in a battered notebook. He’s also being pursued by Reid Miller (Jeremy Strong) a mysterious man in a black suit who’s a…um…bait salesman. That’s not even the 10th weirdest thing in the movie, and we haven’t even gotten to the A-plot yet! 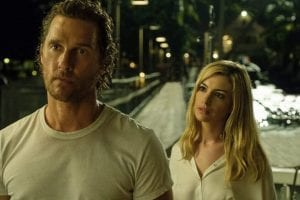 Back into Baker’s life strolls Karen (Anne Hathaway), a stylish blonde who’s not only his ex but also the mother of their son (Rafael Sayegh). She’s gotten remarried to Frank (Jason Clarke), an abusive creep, and now she has an offer for Baker: all he has to do is take Frank out for a fishing excursion, dump him overboard, and let the sharks do their work. In return, she’ll pay him $10 million for his trouble.

Before we go any further, I need to properly calibrate your expectations. If you look at the movie poster for Serenity, here’s what you’ll see:

Director Steven Knight is a person of genuine talent. He’s written a number of scripts, including the very good Eastern Promises, and directed the contained thriller Locke.** Here, his film looks glossy and decent with some nice shot compositions, but in short order, things start to feel off. We have a pulpy tone that feels like it’s mocking pulp at the same time. Then…dammit, let’s get this over with, and talk about the script. 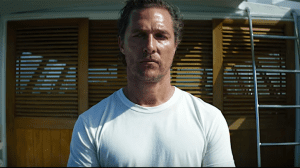 Knight also wrote said script, which is…um. Okay, let’s imagine that the genie from Aladdin decided to bring the mountain of cocaine from Scarface to life. As the mountain of cocaine achieves sentience, the genie says, “What do you want to do with your life, Mountain of Cocaine?” It replies, “I have this idea for a screenplay! Let me tell you about it! Am I blowing your mind, man?” It’s not just the dialogue that’s the problem, which sounds like it was written by a computer that hated both people and film noir. It’s not even the character work for Baker, where he’s supposed to be Sexy Damaged Guy, but actually comes off as Check Out My Bipolar Disorder Guy.

The real problem? There’s a series of twists that increasingly feels insane, and during the last half hour the movie doesn’t just go off the rails; it hits a mountain, explodes, and the fiery wreckage strikes a bus full of nuns and orphans, also causing them to explode. It’s like Knight said out loud, to an empty room, “Hold my beer, M. Night Shyamalan,” and proceeded to make cuckoo storytelling choices that you simply must see to believe. He’s pulling the rug out from under you, beating you with the rug, and yelling, “Do you see the rug I’m beating you with?”

I’d love to clown on the cast, but in good conscience, I can’t. They’re doing what is asked of them. If you want someone who excels at playing an entitled rich jerk, you get Jason Clarke.*** Anne Hathaway, who was so damn good in Colossal, is pretty good here, and if you squint and turn your head si 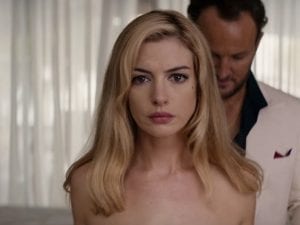 deways you can see the iconic femme fatale performance she’s capable of and that could have been.**** Then there’s Matthew McConaughey, who excels at playing deeply strange men. As Mr. Dill he’s fine, I guess? There’s a good bit of scenery gnawing from him, and I never felt like he was phoning it in. The main problem with our cast is that it never feels like they’re in the same movie and their performances never mesh together.

Sooner or later, we’re all visited by the Bad Idea Fairy. Most of us are lucky that our bad ideas don’t involve a $25 million budget and an end result that millions of people can see. Steven Knight is a talented filmmaker, and his cast and crew are talented professionals. I’m hoping that Serenity acts as a reminder of the importance of one lone voice saying, “Dude, no.”

*I have to genuinely give Serenity credit for featuring an older woman with sexual appetites and treating her as a completely normal person. While the film ain’t exactly woke, let’s give credit where credit is due.

**He’s also one of the creators of Who Wants to Be a Millionaire.

***For an excellent Clarke performance, check him out in Chappaquiddick as the loathsome Ted Kennedy.

****As much as Hathaway and McConaughey are wildly attractive people, they have a kind of anti-chemistry here.

Tim Brennan
Tim has been alarmingly enthusiastic about movies ever since childhood. He grew up in Boulder and, foolishly, left Colorado to study Communications in Washington State. Making matters worse, he moved to Connecticut after meeting his too-good-for-him wife. Drawn by the Rockies and a mild climate, he triumphantly returned and settled down back in Boulder County. He's written numerous screenplays, loves hiking, and embarrassed himself in front of Samuel L. Jackson. True story.
Tagged: anne hathawaydiane lanedjimon hounsouJason Clarkejeremy strongmatthew mcconaugheyrafael sayeghserenitysteven knight
OnColoradoSprings.com is a locally-owned and operated directory and information guide for Colorado Springs Colorado
Discover the best of Colorado Springs shopping, restaurants, night life, breweries, events, business, outdoors, fun, local life, real estate, transportation, jobs, and schools.
Looking for what to do in Colorado Springs? OnColoradoSprings.com has columnists, and bloggers to keep you up to date on the best of Colorado Springs, Colorado.