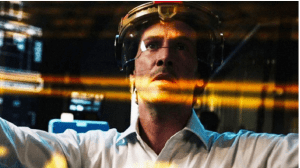 I kind of hate January. There, I said it. Yes, it’s the first month of a new year, and it represents a new start and new possibilities and blah blah blah. After the warmth of the holiday season, January is cold, bleak, bereft of life. The main reason I hate January, though? It’s the month where movies go to die.

For the most part, certain times of the year correspond with certain movies. Summer is for big blockbusters. Late fall is when then Academy Award hopefuls are rolled out. January is the dumping ground of the studios. People are going back to work or back to school, and there generally isn’t much of an appetite for filmgoing. The studios know this, and when they have a film that can’t compete in other months, one that’s too quirky or just plain bad, they kick it out the door like a misbehaving dog. Then, they cross their fingers and pray to the nearest available deity that someone will see their misbegotten movie.

Unfailingly, that someone is me. Let’s take a moment and imagine if I emailed my editor and said, “So…yeah…January is the worst. Is it cool with you if I just don’t write anything for the next 30 days?” Let’s take a moment to imagine the silence, then the peals of dark laughter, then the command to release the hounds. Rather than becoming chow for the Official Metro Sampler War Dogs (patent pending), I have no option but to trudge to the theater and steel myself for the coming onslaught.

At this point, maybe you’re expecting me to pull a reverse and talk about the pleasant surprise I viewed on this week’s cinematic sojourn. Nnnnope. January smacked me around. January said, “You thought 2018 was a garbage year? Hah!” January brought the movie Replicas into my life, and for that, I will never forgive it.

We’re introduced to William Foster (Keanu Reeves), a scientist employed by vaguely defined tech company Bionyne. He thinks he’s developed a way to transplant human consciousness. The body of a recently deceased soldier is brought to his Puerto Rican lab, and along with his trusty sidekick and lab partner Ed (Thomas Middleditch), William takes a crack at performing a resurrection. 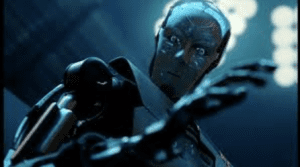 A resurrection into what, you might ask? Well, the “plan” is to transplant the dead soldier’s brain into a synthetic body. When the consciousness finds itself in a horrifying artificial monstrosity, it freaks the hell out and tears itself apart. We’re less than ten minutes into the film, and I thought to myself, “This is potentially a good start. If I’m lucky, maybe I’ll get a weird-ass movie where Keanu Reeves has to deal with multiple human consciousnesses having nervous breakdowns in super-powerful robot bodies.” Guess what? I’m not lucky.

Anyway, after the failure of the experiment, William is cornered by his boss, the imaginatively named Jones (John Ortiz). He’s informed that if he can’t perform a breakthrough, his funding will be canceled, so no pressure there. Under mounting pressure at work, what does he do? Go on a family vacation, of course! William packs his family — oldest daughter Sophie (Emily Alyn Lind), middle son Matt (Emjay Anthony), cute-as-a-button youngest daughter Zoe (Aria Lyric Leabu), and his doting wife Mona (Alice Eve) — into the family minivan. 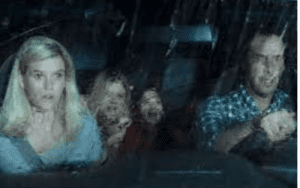 In a very poorly-staged sequence, the Foster family is in a car wreck. Every member of the family is killed, with the exception of William.* He does what many of us would do, which is to call Ed, who is conveniently an expert in cloning. In a film awash in terrible plans, William’s plan is as follows:

Do things go horribly wrong? Yes, but in the least interesting way possible, so sorry about that.

Where does the fault truly lie, though? A heaping helping goes to director Jeffrey Nachmanoff, who’s made a film that is visually flat, underlit, and incredibly unimaginative. The film was shot in Puerto Rico with a $30 million budget. What does he have to show for it? A generic-looking upper-middle-class home, a weirdly empty laboratory, and a little bit of jungle. There’s also some truly unfortunate CGI that would feel right at home in Season One of Buffy the Vampire Slayer.***

An even larger heaping helping of blame can be flung at the lousy screenplay by Chad St. John, known for writing the racist and stupid London Has Fallen, and the racist and stupid Peppermint. This script is not racist but it’s twice as stupid. I could harp on the bad dialogue, such as characters throwing around pseudo-scientific nonsense like “bring me the algorithm.” I could harp on the almost non-existent characterization of the Foster family. What personality traits do the kids have? None; so why do we care if they die? The most unforgivable sin of the script is that it takes an intriguing idea, a story about a man who hides the dead bodies of his family and attempts to clone them, and makes it boring. I guarantee you that if I gave you 30 seconds, you would come up with at least three approaches to the material better than what we’ve got. Instead, the script takes intriguing ideas about memory and identity and just shrugs at them. 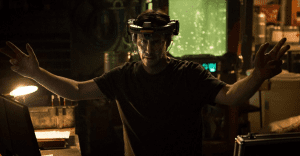 The cast isn’t great, but I can’t get upset with them since they have a rotten script and poor direction to contend with. Meryl Streep couldn’t make this work. And Keanu? Look, I genuinely like Keanu Reeves. He’s the greatest action star produced in America so far,**** and despite having a limited range, he’s excellent when you cast him within that range. Here, you can see Reeves really, really trying. He’s obsessed, a little charming, and there’s even a scene where grief-stricken, he hilariously curls up with his daughter’s stuffed unicorn. If there had been more bananas acting choices like that, we’d at least have a 30 percent more entertaining movie.

In the last few years, I’ve been working very diligently at having more of an optimistic outlook. While the bad news is that I had to watch Replicas and write about it, there’s a silver lining in this especially dark cloud. In a few short months, John Wick: Chapter 3 will be released. If it can sustain the quality of the previous two films, we’ll have possibly the greatest action trilogy in American film history. Better news? It also means nobody will talk about Replicas ever again.

*William escapes a horrific car wreck with a minor head injury. This is nowhere near the most ridiculous thing that happens.

**Special thanks to Ryan George. You can check his stuff out here.

***I say that as someone who deeply loves Buffy, but the CGI in some of those early episodes? Woof.

****Seriously! Reeves has done The Matrix trilogy, the John Wick movies, Speed, Point Break, and Constantine. Only Tom Cruise and Harrison Ford can give him a run for his money.

Tim Brennan
Tim has been alarmingly enthusiastic about movies ever since childhood. He grew up in Boulder and, foolishly, left Colorado to study Communications in Washington State. Making matters worse, he moved to Connecticut after meeting his too-good-for-him wife. Drawn by the Rockies and a mild climate, he triumphantly returned and settled down back in Boulder County. He's written numerous screenplays, loves hiking, and embarrassed himself in front of Samuel L. Jackson. True story.
Tagged: alice evearia lyric leabuchad st. johnemily alyn lindemjay anthonyjeffrey nachmanoffjohn ortizkeanu reevesreplicasthomas middleditch
OnColoradoSprings.com is a locally-owned and operated directory and information guide for Colorado Springs Colorado
Discover the best of Colorado Springs shopping, restaurants, night life, breweries, events, business, outdoors, fun, local life, real estate, transportation, jobs, and schools.
Looking for what to do in Colorado Springs? OnColoradoSprings.com has columnists, and bloggers to keep you up to date on the best of Colorado Springs, Colorado.