“That was better than it had any right to be.” A friend of mine said that after we departed the theater, having just seen the new film Overlord. He was quite right, but you might be reasonably asking yourself, “What’s up with the smug condescension? Aren’t you supposed to give each movie its day in court and approach it as a cinematic tabula rasa?” 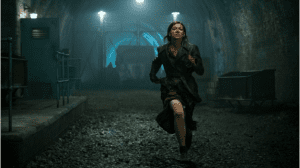 Yeah, I know. You’re supposed to, but let’s be honest here. We all have our biases, especially when it comes to movies. Some people want to immediately take a suicide pill when they see a trailer for the latest Marvel movie. Others start planning an escape from the theater with the determination of Andy Dufresne in The Shawshank Redemption when confronted with a romantic comedy. It’s all because of trailers.

We all have our biases, but sometimes it’s tough to be impartial. You see a trailer and have an emotional reaction. Excitement. Disinterest. Things can get tricky when marketing gets involved. I first saw the trailer for Overlord a few months back.* My movie sense didn’t start tingling one way or the other. I was neither jacked up with anticipation nor sighing audibly with the cursed knowledge that I’d have to see a likely piece o’ crap. Overlord looked fine. But sometimes, in this hard world, you get a break. Overlord is no masterpiece, but it’s better than fine by a country mile.

In an excellent opening sequence, we’re dropped into World War II and introduced to Boyce (Jovan Adepo), who is not having a good war. He’s a lowly private assigned to a paratrooper squad. Their mission sure sounds straightforward 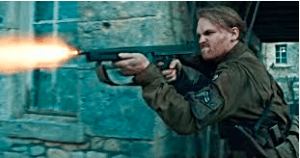 enough. There’s a serious offensive coming up called D-Day. To give the Allies a tactical advantage, Boyce and his squad are ordered to parachute into Nazi-occupied France and destroy a radio tower located in an old church.

It sounds straightforward enough until his plane is shot down and most of his squad is killed. Boyce survives, along with four other soldiers. Corporal Ford (Wyatt Russell) is in charge, a take-no-guff type who’s been in action and Seen Things. Tibbet (John Magaro) is a mouthy sharpshooter with a hilariously Noo Yawk accent. Chase (Iain De Caestecker) is a chipper photographer. Lastly, there’s Dawson (Jacob Anderson), a friendly guy telling everyone who will listen that he dreams of writing a book. You can guess what happens to him.

After some minor setbacks involving gunfire and explosions, Our Heroes make it to the French village. This is very much a good news/bad news kind of scenario. The good news is, they find the tower! The bad news is, they also find a sprawling compound crawling with a suspiciously large number of Nazis. Their leader is Wafner (Pilou Asbaek), an oily 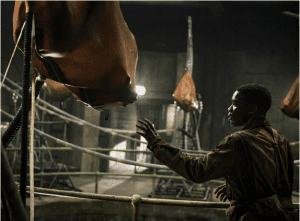 SS officer who would have felt right at home in an old John Wayne war movie.

Do Our Heroes have a plucky band of French Resistance fighters to help them complete their mission? No, but they do have scavenger Chloe (Mathilde Ollivier) and her young brother Paul (Gianny Taufer), who reluctantly hide them. While Boyce and Company plot their next move, news starts to filter out from the compound of unnatural experiments, and a new kind of soldier…

Remember we talked about biases earlier? If I tell you that Overlord is a war movie with a heaping dollop of supernatural horror, you’re going to make a quick mental calculation. You’ll look first at the cast and realize the biggest name is Bokeem Woodbine, who isn’t in the film long. Then, you’ll weigh the odds of things getting cheesy because there’s a right way and a wrong way to do this kind of things.

Luckily, Overlord is the right way to tell this story. It’s the first major feature for Julius Avery, director of a number of award-winning short films and the low-budget crime thriller Son of a Gun. Avery’s years working with minimal budgets have served him well because Overlord was made for a measly $38 million, and it looks fantastic. We’ve got sets consisting of crumbling castles, weird laboratories, and dank tunnels that feel tactile. Avery layers on some excellent (and goopy) effects and the film is shot with lurid colors and deep shadows. For the most part, his pacing is solid, 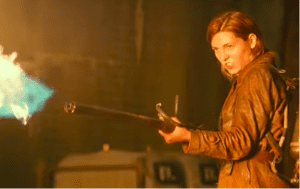 though there’s a bit of bloat in the second act that could have been trimmed. Be prepared, because the sound mix is cranked up, making Overlord a thunderously loud movie.

How’s the script? It’s written by two wildly overqualified writers. Mark L. Smith wrote The Revenant and the nightmarish New French Extremity classic Martyrs, while veteran screenwriter Billy Ray penned Captain Phillips and The Hunger Games. I mention their credentials because they have given us a script where characters constantly put themselves in mortal danger out of curiosity.** While sneaking through the compound, Boyce takes the time to investigate flesh sacks, medical curtains, and mysterious syringes. Always. All the time. A little curiosity is fine, but seriously? Also, you will not find nuanced characters here. We have a loudmouthed kid from New York, a tough commanding officer, and an evil villain just going for it and being as evil as he can possibly be.

The cast is also fine, with a couple of notable standouts. As Boyce, Jovan Adepo is a breath of fresh air in that he’s playing a normal and reasonable guy in a very abnormal and unreasonable situation. He wants to do the right thing and behave decently, and I liked seeing a protagonist who didn’t carry a convoluted backstory. Kurt Russell’s son Wyatt is the no-nonsense Ford, and he’s got his old man’s swagger and wry line delivery. Somebody needs to put this guy in an action franchise fast. He’s the goods.

At the end of the day, Overlord isn’t much more than a b-movie, a splattery war/horror hybrid with gnarly special effects and strong action. There’s a fun and pulpy sensibility on display here, and we’re given a movie that takes itself seriously — but not too seriously. It’s better than it has any right to be. I’m also happy I don’t have to watch that damn trailer again.

*Though I didn’t love seeing the trailer attached to every film I saw for months. At this point, I can probably recite the trailer from memory.

**And stupidity, because let’s face it, this is a horror movie. If people behaved reasonably and intelligently, the movie would be about 25 minutes long.

Tim Brennan
Tim has been alarmingly enthusiastic about movies ever since childhood. He grew up in Boulder and, foolishly, left Colorado to study Communications in Washington State. Making matters worse, he moved to Connecticut after meeting his too-good-for-him wife. Drawn by the Rockies and a mild climate, he triumphantly returned and settled down back in Boulder County. He's written numerous screenplays, loves hiking, and embarrassed himself in front of Samuel L. Jackson. True story.
Tagged: billy rayiain de caesteckerjohn magarojovan adepojulius averymark l. smithmathilde ollivieroverlordpilou asbaekwyatt russell
OnColoradoSprings.com is a locally-owned and operated directory and information guide for Colorado Springs Colorado
Discover the best of Colorado Springs shopping, restaurants, night life, breweries, events, business, outdoors, fun, local life, real estate, transportation, jobs, and schools.
Looking for what to do in Colorado Springs? OnColoradoSprings.com has columnists, and bloggers to keep you up to date on the best of Colorado Springs, Colorado.