Folks, I’d like to apologize up front for this review of Venom. To put things into context, we’re going to have to make a deep dive into nerdery. I know! I can hear your eyes rolling from here. We’ll make this quick, I promise. In 1988, The Amazing Spider-Man #300 was published.* That comic book introduced Venom, an enemy of the wall-crawler. Built like a weightlifter and utterly vicious, he’s got the same powers as ya boi Spidey, along with extremely flexible morals. Totally unsurprisingly, the character was an instant hit, beloved by edgelords** before edgelords were a thing.

But isn’t calling Venom an edgelord avatar…I don’t know, an unnecessarily mean thing to say? No. Here’s why: the character of Venom initially wasn’t entirely a character. He was little more than a rampaging monster who simply wanted to devour the brain of the humble Peter Parker. Despite being little more than a sleek costume, Venom became a comic book icon.

Fast forward to 2007, where the character made his ill-advised film debut in the ill-advised Spider-Man 3. One year later, Iron Man kicks off the Marvel Cinematic Universe, and as trainloads of money were deposited at Marvel Studios, rival studio Sony jealously cast its eyes toward its own competing franchise. That’s when the terrible ideas really started.

After years of negotiations, Sony and Marvel Studios reached a deal in which Spider-Man would appear alongside the other heroes of the MCU. Was Sony content to sit back and reap the profits for basically doing nothing? They were not, 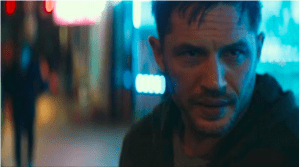 and a harebrained and likely cocaine-fueled idea was hatched. Sony would create a cinematic universe featuring Spider-Man’s villains and supporting characters — only Spider-Man wouldn’t be featured in any of the films! That way, Sony would reap all the profits and use them for mountains of cocaine which would fuel more terrible ideas! The end result of all this foolishness is the motion picture Venom. Is it truly that bad? Absolutely, but there is one redeeming characteristic. It features a lead performance that’s fearless and compelling. Seriously.

The nonsense begins in space, as a manned space probe returns to Earth. It’s owned and financed by the Life Foundation, a frustratingly vague tech company. The probe has brought back honest-to-goodness aliens, four symbiote lifeforms discovered hanging out on a comet. One of the gooey critters escapes, causing the ship to crash in Malaysia. Three of the symbiotes are recovered, but the fourth escapes.

From there, we’re introduced to Eddie Brock (Tom Hardy), an investigative journalist. Our Hero is on top of the world. He’s got a great career, and his lawyer fiancee Anne Weying (Michelle Williams) just loves the dickens out of him. 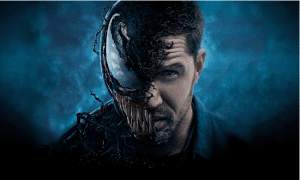 Things start to fall apart when Eddie interviews Carlton Drake (Riz Ahmed), the Elon Musk-like owner of the Life Foundation. In one of those cinematic moments that I never tire of, Eddie suspects Drake is up to no good, and Anne’s law firm just happens to be defending the Life Foundation in a lawsuit.

Unfortunately, Eddie is the slightest bit of a dick. He reads a secret legal document on Anne’s laptop and proceeds to try to bring down Drake. His attempt fails; both Eddie and Anne lose their jobs, and Anne proceeds to drop Eddie like he’s a bad habit. Six months later, Eddie is living in a skid row apartment, desperately trying to find work. At this point, Dr. Dora Skirth, a guilt-ridden Life Foundation scientist, reaches out to Eddie for help. It seems that Drake has been performing unauthorized human trials with the symbiotes, and Dr. Skirth wants Eddie to break the story wide open. You might be wondering why the good doctor chooses to contact an ex-journalist who’s lit his credibility on fire, as opposed to someone who is currently a respected reporter. I also wondered about that. 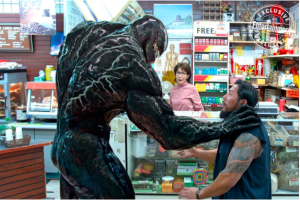 Anyway, Eddie and Dr. Skirth break into the Life Foundation, and things immediately go wrong. After a bunch of yelling and other loud noises, Eddie becomes the proud owner of a barely-used symbiote. Through a goofy, growly voice bouncing around in Eddie’s head, the black blob bonds with him and introduces itself as Venom. This is a real good news/bad news scenario. The good news is that the symbiote gives Eddie superpowers. The bad news is that the symbiote is extremely interested in the possibility of eating people. Will Eddie and Venom come to an uneasy truce? Will they get to the bottom of Drake’s plans? Spoiler alert, both of those things happen.

Let’s be real here. A Venom movie connected to a Spider-Man Cinematic Universe that doesn’t actually feature Spider-Man isn’t the worst idea ever. It’s not on the same level as, “Let’s build a ship named Titanic, tell everyone that it’s unsinkable, and basically shove a middle finger in God’s face.” It is close, however, and everyone involved sure gives it the old college try.

Part of the problem is director Ruben Fleischer. His feature debut was 2009’s Zombieland, a fast and clever comedy that immediately got attention. He hasn’t made a film that’s anywhere as strong since, which says to me that he’s a filmmaker entirely dependant on a solid script. Here, his direction is fine. There’s a motorcycle/drone chase that’s kinda fun, and Fleischer pushes the limits of what’s acceptable in a PG-13 rated film. But there are too many action scenes where a goopy blob flails around. When multiple symbiotes are thrown into the mix, the action scenes become as incomprehensible as anything in the Transformers movies.

An even larger part of the problem is the screenplay written by *deep breath* Jeff Pinkner, Scott Rosenberg, Kelly Marcel, and Will Beall. We have characters like Eddie, who’s initially shown to be highly reckless, then never learns a lesson about recklessness or changes. We have characters like Carlton Drake, who’s a one-dimensional egotistical billionaire. Worst of all, we have characters like poor Jenny Slate’s Dr. Skirth, who is nothing more than an exposition device. Add to that a network of plot points that don’t have anything to do with character journeys, and it adds up to a rickety foundation.

The cast? Oh, we’ll get to Tom Hardy in a minute. First, let’s talk about the baffling decision to cast multiple Academy Award nominee Michelle Williams in the thankless role of Concerned Maybe Ex-Girlfriend. Why in the name of sunny sweet Jesus would you do that? The thought is probably that her talent would naturally elevate the material, which it doesn’t. Riz Ahmed is also a highly talented actor, and he’s given the non-opportunity to play a boring-as-hell villain. If nothing else, I hope these guys were paid well. There’s also a very well-known celebrity who shows up in a post-credits scene wearing what can only be described as a Ronald McDonald wig.

Then there’s Tom Hardy. I think it’s no exaggeration to call him one of the most magnetic and compelling performers in the world. When Hardy shows up for a role, he commits, and holy hell, does he commit here. When he first shows up, as a theoretically normal person, he speaks in a bizarre accent and, at best, behaves like he’s experienced a head wound. Once he bonds with the symbiote, he goes to 11. Hardy flops around like an electrocuted puppet. He climbs into a lobster tank. He sweats, screams, writhes, leaps, and ACTS. If that’s not enough, Hardy also does the voice of Venom. The two…er…one of them bickering creates a strange romantic tension. If I thought the script was smart enough, I’d swear they were adding in clever queer subtext. But it isn’t, so they aren’t. Still, Hardy delivers one of the most profoundly entertaining performances I’ve ever seen, and I enjoyed every second he’s on screen.

You know why the films in the MCU are nearly always successful? It’s love. From writers to directors to actors to producers, everyone involved genuinely loves the characters and loves what they represent. From Black Panther to Ant-Man, you can feel that love. With Venom, there’s no love because there’s no character to love.*** There’s only a drooling creature who says, “Eyes, lungs, pancreas, so many snacks, so little time.”

**If you’re not up on the slang the cool kids use, maybe Urban Dictionary can help.

***It bears mentioning that there are compelling directions smart screenwriters could have taken with the characters of Eddie and Venom. This story from the comics would have been fascinating.

Tim Brennan
Tim has been alarmingly enthusiastic about movies ever since childhood. He grew up in Boulder and, foolishly, left Colorado to study Communications in Washington State. Making matters worse, he moved to Connecticut after meeting his too-good-for-him wife. Drawn by the Rockies and a mild climate, he triumphantly returned and settled down back in Boulder County. He's written numerous screenplays, loves hiking, and embarrassed himself in front of Samuel L. Jackson. True story.
Tagged: jeff pinknerjenny slatekelly marcelmichelle williamsriz ahmedruben fleischerscott rosenbergtom hardyvenomwill beall
OnColoradoSprings.com is a locally-owned and operated directory and information guide for Colorado Springs Colorado
Discover the best of Colorado Springs shopping, restaurants, night life, breweries, events, business, outdoors, fun, local life, real estate, transportation, jobs, and schools.
Looking for what to do in Colorado Springs? OnColoradoSprings.com has columnists, and bloggers to keep you up to date on the best of Colorado Springs, Colorado.