Through the Looking Glass

If you’re reading this, you’re online. It’s physically impossible to read what I’ve written without having some kind of device like a smartphone or laptop, electricity to power your expensive doodad, and an online connection. What does the online experience give us? The power of connection. You can check your college roommate’s status on Facebook, look at your boyfriend’s hiking video on Snapchat, or tweet mean things at the President and his Large Adult Sons.*

Are we really connected, though? By 1995, the internet became totally commercialized, and virtually all of us established some kind of online presence. I joined Facebook a bunch of years back. Nearly everyone I’m friends with is someone I legitimately care about and have or had some kind of relationship with in the real world. But the online world changes how I perceive those relationships.

Here’s an example. My buddy Crow died of an illness a couple years back. We weren’t particularly close, but he was a good guy with a laugh that could fill a room. In the aftermath of his death and memorial service, I saw comments from people I didn’t know talking about aspects of his life I was totally unfamiliar with. Did I really know him? I thought I 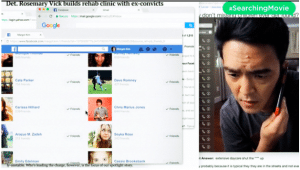 The only thing I am sure of is that we have literally no idea how these enormous technological leaps forward are affecting our mental health, brain chemistry, and relationships. For better or for worse, this is how we live now. It only makes sense that films will comment on this curious lifestyle, and the new film Searching has much to say, and says it well.

Let’s get the gimmick out of the way now — the film is shot in the “Screenlife” style, in which the story is told from the perspective of screens, messages, and images on various computers. We’re introduced to the Kim family, and in an efficient montage that gives Up a run for its money, we meet David (John Cho), his wife Pamela (Sara Sohn), and their daughter Margot. We learn about the family’s dynamic, the love between them, Margot’s piano aptitude, and the lymphoma that eventually takes Pamela’s life.

Fast forward a few years and teenaged Margot (Michelle La) has a loving but distant relationship with David. Communication is a priority between these two, or at least it’s supposed to be. Margot heads off to a friend’s house to study. She doesn’t come home. David isn’t particularly worried. He probably should be, considering the unanswered phone calls and FaceTime video calls from her that we see on David’s screen as he sleeps. 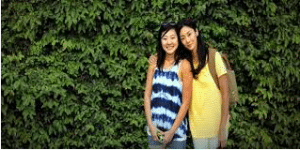 Still, David is good about not jumping to conclusions, which we see with written and hastily deleted texts. He reaches out to his stoner brother Peter (Joseph Lee) for help, but gets no useful information. Margot’s friends aren’t much help either, and as David reaches out to more of them, he becomes more convinced that his daughter has a life that’s hidden from him.

As David learns more, his dread grows. He contacts the police, and sympathetic cop Detective Rosemary Vick (Debra Messing), launches her own investigation. From there, David and Margot’s private digital lives become alarmingly public. Commenters on message boards start accusing David of masterminding the disappearance, and he gets into a scuffle with an obnoxious high school student — which naturally shows up on YouTube.

I must admit, I wasn’t fully onboard for this one, based on the previews. Still, I figured John Cho deserved some love, and at a relatively brisk one hour and 42 minutes, I figured that worst-case scenario, my irritation would be brief. It’s so nice being wrong, because Searching is a very strong film with a gimmick that’s surprisingly well-executed. 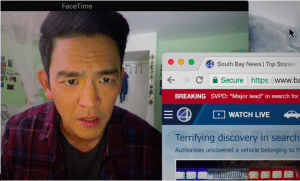 Think of this film as a three-legged stool, and in order to be stable, all three legs need to be both strong and complementary. The first leg is director Aneesh Chaganty, in yet another case this year of a gifted filmmaker who’s blown minds with a strong debut feature. While sticking to his central Screenlife conceit, he still effectively uses old-school film language like zooms, pans, and time jumps in order to switch between iPhones, laptops, closed-circuit TV footage, social media, and far more. Chaganty has an innate understanding of pacing and tension, and as the characters learn more, he gradually cranks up the tension while keeping things grounded.

The second leg is the script written by Chaganty and Sev Ohanian. While other filmmakers would aim for cheap thrills, like the gimmicky Phone Booth, Chaganty and Ohanian never forget about characterization and genuine emotion. They don’t just focus on the search for Margot. They also focus on her hidden online life, and the hidden identity that she maintained. In the third act, the story does veer perilously close to what you’d expect with your standard cheesy thriller. Despite that, the story and the structure of the script worked quite a bit longer than I thought it would.

The third leg is a strong performance from John Cho as David. He’s in the vast majority of the film in either a close-up 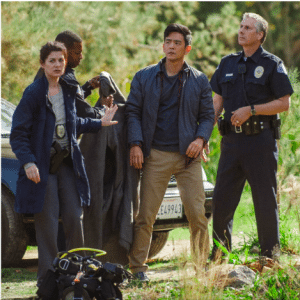 or medium shot, which means the emotion of his performance is always directly in front of us. To pull off something like that, you need a lead that can handle a vast range of emotions well, and Cho pulls it off admirably. This is the kind of acting that doesn’t get enough love, the performance of a normal person behaving in natural and relatable ways. Cho’s David reacts in much the same way most of us would in a situation like this. It’s appalling to me that Cho isn’t a gigantic star by now.

On the flip side? As Detective Vick, Debra Messing’s performance feels oddly flat. That surprised me, as Messing has been working steadily for years and turning in reliably solid performances. As Vick, the role needs someone who can take big emotions, compress them, and display them in quiet and subtle ways. I’m not sure what the problem was, but Messing isn’t getting it done here. I wonder what a Cate Blanchett or Fairuza Balk would have done with this role?

Searching does a number of things very well. It tells a story using a very new method of screen storytelling, and anchors the film with a clever script and an outstanding John Cho. If you’re looking for smart and creative entertainment that legitimately has something to say about how we’re living our lives, this movie is not to be missed.

*Not that I would ever do such a thing.

Tim Brennan
Tim has been alarmingly enthusiastic about movies ever since childhood. He grew up in Boulder and, foolishly, left Colorado to study Communications in Washington State. Making matters worse, he moved to Connecticut after meeting his too-good-for-him wife. Drawn by the Rockies and a mild climate, he triumphantly returned and settled down back in Boulder County. He's written numerous screenplays, loves hiking, and embarrassed himself in front of Samuel L. Jackson. True story.
Tagged: aneesh chagantydebra messingjohn chojoseph leemichelle lasara sohnsearchingsev ohanian
OnColoradoSprings.com is a locally-owned and operated directory and information guide for Colorado Springs Colorado
Discover the best of Colorado Springs shopping, restaurants, night life, breweries, events, business, outdoors, fun, local life, real estate, transportation, jobs, and schools.
Looking for what to do in Colorado Springs? OnColoradoSprings.com has columnists, and bloggers to keep you up to date on the best of Colorado Springs, Colorado.