Die Hard is the greatest American action movie ever made. Released on July 12, 1988, there are an awful lot of reasons why it shouldn’t have worked. Casting the lead role of John McClane wasn’t easy. The studios really wanted either Al Pacino or Richard Gere, but neither was interested. Stallone passed on it. Schwarzenegger passed on it. Eastwood passed on it. Hell, even Frank Sinatra passed on it.* They had to settle for Bruce Willis, a motormouthed television actor.

Weirder yet? Despite only being known for fairly obscure English TV, Alan Rickman landed the iconic role of archvillain Hans Gruber. This was his first film. Ever. Even weirder? Director John McTiernan read the novel the film is based on and promptly got rid of most of the story and characters. Why? The book itself is not what you would call a laugh-a-minute. It’s gritty. Serious. The villains are a group of bloodthirsty terrorist fanatics. McTiernan wanted a change. A sense of joy.

Take inspired casting, precision directing, and clever screenwriting, put them together, and you end up with a film that casts a long shadow. Die Hard made $83 million in 1988, which adjusted for ticket price inflation comes out to somewhere around $187 million. It also spawned a sub-genre, in which a lone hero is unwillingly thrust into a dangerous situation located in a single location and does battle with a brilliant mastermind.

There are a lot of Die Hard copycats. A freaking lot. Some are very good, like Speed (Die Hard on a bus) and 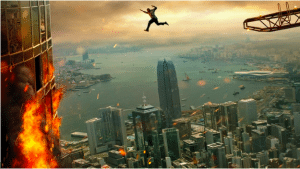 Cliffhanger (Die Hard on a mountain). Others are okay, like Under Siege (Die Hard on a battleship) and Olympus Has Fallen (Die Hard in the White House). Still others are straight-up Not Good, like Sudden Death (Die Hard in a hockey arena). It’s been a while since we’ve gotten a Not Good copycat. Whoops — shouldn’t have said that, because Skyscraper has been inflicted upon us, and ladies and gentlemen, it is Not Good.

I shouldn’t start sighing audibly at the very beginning of a movie. Sigh I did when we’re introduced to Will Sawyer (Dwayne Johnson) in a flashback to Ten Years Earlier. He’s a member of a hostage rescue team, and when a mission goes wrong, the lower half of Will’s leg is blown off. As so often happens, his surgeon Sarah (Neve Campbell) saves his life and they fall in love and get hitched.

Yeah, Will now has a prosthetic leg, which is kind of a bummer. But Will and Sarah have two cute-as-a-button kids, Georgia (McKenna Roberts) and Henry (Noah Cottrell), so I guess it evens out. Better yet, Will runs a small business charged with assessing the security of skyscrapers. His pal Ben (Pablo Schreiber) even recommends a cushy gig for him at The Pearl.

What is The Pearl, you may ask? Located in Hong Kong, it’s the world’s tallest skyscraper standing at 3,500 feet and

240 stories tall. The Pearl is the brainchild of the bewilderingly rich Zhao Long Ji (Chin Han), and to paraphrase Jurassic Park, he’s spared no expense. The building has state of the art fire suppression systems, top-notch security, and what looks to be a quasi-holodeck in the penthouse. Why is there a quasi-holodeck? Well, the rich are very different from you and I, apparently.

Anyway, the Sawyer clan has moved into a lovely apartment on the 98th floor of The Pearl. That’s inconvenient due to the presence of Kores Botha (Roland Moller), a heavily-armed mercenary leading a team of likewise heavily-armed mercenaries. They proceed to disable the fire-suppression system and set the 96th floor on fire. Why would they do such a nefarious deed? So they can steal a McGuffin, silly! Unfortunately, Sarah and the kids are home and have gotten

themselves trapped. As Will prefers his family not on fire, he must brave both the flames and the baddies to rescue them.

Look, if you’re going to rip-off Die Hard and cast Dwayne Johnson as the lead, you immediately have yourself a Rock-sized problem. Johnson is a hulking mass of muscle, and he looks like he could rip Hans Gruber’s head clean off. Do you really want a movie where he smashes his way to victory? No, you don’t, because that’s dull. Off the top of my head, I can think of two ways you make this film defy expectations:

That’s just two scenarios. I thought of those sober and on just two cups of coffee, and I am not a professional filmmaker. Rawson Marshall Thurber is, having previously directed Johnson in the kind-of funny Central Intelligence. Here, he’s getting serious with a slickly-directed film that immediately starts moving and doesn’t let up. That’s a problem, because for a movie like this to work, we first need the environment established. Thurber rushes through the description of The Pearl so fast, we never get a sense of its geography or character. He does a nice job with some vertigo-inducing setpieces, and he’s aided by cinematographer Robert Elswit** in making the fiery mayhem look pretty.

Thurber also wrote the script, and this is where it starts to make me cranky. When the bad guys begin their siege in Die Hard, what’s the first thing John McClane does? He runs away and hides on another floor. That terror is a totally recognizable human emotion, but we rarely feel it here. Dwayne Johnson’s Will is another highly trained badass, and 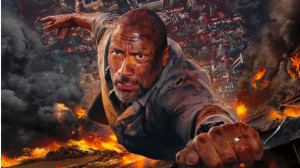 his character is, at worst, uneasy at times. Most of the characters seem unencumbered by personalities. Lead villain Botha is generically evil, and his underlings aren’t much better. There’s a henchwoman who constantly scowls, a snide hacker…and then a bunch of other guys with guns. If you have a big personality like Dwayne Johnson as your lead, you need antagonists that are credible threats. Compare the blue-collar underdog John McClane to the tactical genius Hans Gruber and you’ll see what I mean.

It’s not the fault of the cast that they have so little to work with. Neve Campbell tries her best, and even gets a little ass-kickery thrown her way. She’s a skilled performer and there’s no reason she couldn’t be a credible action lead. As Sarah, she mostly looks terrified, and that’s a massive waste of her talents. I liked Chin Han’s Zhao, despite playing a two dimensional billionaire.

Then there’s Dwayne Johnson and the constant conundrum I have with him. First, understand that he’s an incredibly skilled performer. To be involved in the WWE, you have to be both a credible athlete and a strong actor. Looking at his filmography, I see he’s done films like The Rundown, Pain and Gain, and Southland Tales and delivered strong performances. Also looking at his filmography, he usually plays the same guy over and over. He’s the same guy in Fast Five, the same guy in San Andreas, and the same guy here, the ultra-competent slab of beef who can deliver a haymaker or a quip. It’s all variations on a theme, and understand that I not only like Johnson as a performer, but also he seems to be a good guy. I just wish he’d take risks as big as he is.

Buried beneath the CGI fire, the boring-as-hell McGuffin, and the perfunctory action beats is the seed of a good movie. Imagine an action movie that utilizes all the weird details of modern supertall structures.*** Imagine Dwayne Johnson playing a flawed hero with the odds against him. Imagine a villain that could plausibly beat him — easily. If that movie ever gets made, it’ll be a worthy successor to Die Hard. Until then, we’re stuck with Skyscraper.

*This is a completely true statement. Die Hard is based on Roderick Thorp’s novel Nothing Lasts Forever. The novel is a sequel to The Detective, and Sinatra starred in the film adaptation in 1968. Sinatra’s contract stipulated that he had to be offered the sequel first and, completely unsurprisingly, the 73 year old turned down the role.

**Elswit is Paul Thomas Anderson’s usual cinematographer, and he shot There Will Be Blood and Boogie Nights. Why was this wildly overqualified guy hired to work on Skyscraper? Probably because he was also the director of photography on Mission Impossible: Ghost Protocol.

***Which you can learn a little more about here.

Tim Brennan
Tim has been alarmingly enthusiastic about movies ever since childhood. He grew up in Boulder and, foolishly, left Colorado to study Communications in Washington State. Making matters worse, he moved to Connecticut after meeting his too-good-for-him wife. Drawn by the Rockies and a mild climate, he triumphantly returned and settled down back in Boulder County. He's written numerous screenplays, loves hiking, and embarrassed himself in front of Samuel L. Jackson. True story.
Tagged: byron mannchin handwayne johnsonmckenna robertsneve campbellnoah cottrellpablo schreiberrawson marshall thurberroland mollerskyscraper
OnColoradoSprings.com is a locally-owned and operated directory and information guide for Colorado Springs Colorado
Discover the best of Colorado Springs shopping, restaurants, night life, breweries, events, business, outdoors, fun, local life, real estate, transportation, jobs, and schools.
Looking for what to do in Colorado Springs? OnColoradoSprings.com has columnists, and bloggers to keep you up to date on the best of Colorado Springs, Colorado.