It’s impossible to know for certain how a flu season will be, but the flu season in the Southern Hemisphere may be an indicator for how bad the flu will be in the Northern Hemisphere. In Australia, where winter and flu season are wrapping up, the flu started early in the year and a particularly virulent flu strain, H3N2, dominated.

In the US, a 4-year-old child has already died from the flu. A death so early in the season can also indicate a particularly nasty flu that may be worse than usual.

Last year’s flu season ran from Oct. 1, 2018, to May 4. Doctors recommend getting the flu shot now, and definitely before Thanksgiving. 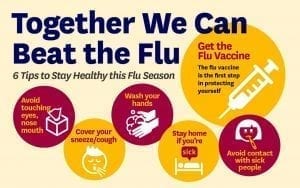 “The concern with delaying it is that some people who might have the opportunity to get vaccinated now may not have that opportunity later,” said Dr. Robert Atmar, a professor of medicine and an infectious disease expert at Baylor College of Medicine in Houston.

“The most important thing is for people to get their flu vaccine, and get it before the epidemic starts,” he said.

Fluzone and the standard dose shots available this year include protection against several influenza strains, including H1N1 and H3N2.

Kaylee Huntley
Kaylee was raised (but not *technically* born) in Colorado. She graduated from Regis University with a bachelor of arts in English. During her time at Regis she worked as a teaching assistant in a freshman classroom setting and in the writing center helping students on a variety of topics. While there, she discovered Cura Personalis, or care for the entire person, leading to her love of feminism and desire for equal rights for all. Kaylee spends her time reading, writing, and debating.
Tagged: 2019flu season
OnColoradoSprings.com is a locally-owned and operated directory and information guide for Colorado Springs Colorado
Discover the best of Colorado Springs shopping, restaurants, night life, breweries, events, business, outdoors, fun, local life, real estate, transportation, jobs, and schools.
Looking for what to do in Colorado Springs? OnColoradoSprings.com has columnists, and bloggers to keep you up to date on the best of Colorado Springs, Colorado.