Home » Articles » Advice for Grads Moving to a New City

Advice for Grads Moving to a New City 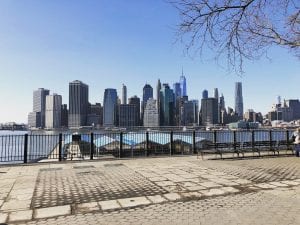 It’s around that time that many graduates are looking at jobs in different cities, thinking of moving. Moving to a new city can be scary, but it can be done! I moved to New York City after graduating and it was a whirlwind of an experience. Here are some things I learned from the move to help if you are thinking of moving somewhere new soon.

This seems like such an obvious tip—however it was a tip I did not follow! I moved to New York City without an apartment, and while I’m very happy and lucky that it worked it the way it did (I stayed in a hostel for a week and got an apartment within that week), it’s much better to have a place to move right in. Moving to a new city is already stressful enough, so don’t stress yourself out more than needed! A month or two before you plan to move, set a time to go visit the city and see some apartments and sign a lease. Having a lease ready for you when you get there will make the transition much smoother. If you are looking for roommates, check if the city has any housing groups on Facebook. For New York City, there was a bunch of ‘Gypsy Housing’ groups that were always posting for new roommates.

I know some people are specifically moving to a specific city because they accepted a job in that area. To all of you—congrats, you can skip this part. To the rest of the readers that may be moving to a city to be a part of the opportunities they have but haven’t locked a job down yet, continue reading. I transferred Starbucks’ locations to have a job in place in New York, and thank goodness I did because you NEED an income there. If transferring jobs in that sense isn’t an option, move with a LOT of savings, and immediately try and get a job along those lines just so you are making some kind of money, even if it’s not the job you want long term. It might be harder than you think to get the job you want, and again, no reason to stress yourself out more.

Every place is different, and depending on where you are, planning to move could be a real shocker. Moving to a city near you? It probably won’t be too different. However, are you moving across the country? You’ll want to Google what it’s like, the weather, how people are, etc. so you aren’t completely surprised. It will help gauge if you really want to move there as well. Seems obvious, but it’s much better to research before, because chances are it will already be quite a difference WITH researching.

Moving is already stressful, but moving to an entirely different city and possibly state? It can be very crazy and a time full of a lot of transition—especially if you move after college, a place you have been the last four years that you feel very cozy and comfortable with now. It will be a hard time, but it can also be a great, thrilling, exciting time to move! Be gentle with yourself during the transition of moving and the transition of adjusting to a new city. There will be a learning curve, and it may feel very difficult at times. Keep your head up, your wits about you and you’ll do just fine!

This point is a little farther down the line timewise, but I think it is important to mention nonetheless. When I moved to New York, I remember thinking ‘this is my life now, I live here.’ I imagined my whole adult life being there, just as a given. However, when my lease ended, I realized I could decide to do whatever I wanted, and just because I moved there didn’t mean I had to stay. I did move away, and something important to know and remember is if you do leave, know that it doesn’t mean it was a failure. You are a real human being in control of your desires, wants, and needs, and if something doesn’t line up with what you want out of your life, make that change. Of course, give it a minimum of 6 months to really get adjusted, but once you’re adjusted and decide you just might not want to live there for the long-term future, know that that is perfectly fine.

Rea McLaughlin
Rea McLaughlin is an enthusiastic soul that loves life from Colorado. She loves the Colorado sunshine and enjoys partaking in it often by going climbing, hiking or camping. She attained her BFA in Film Studies from the University of Colorado at Boulder where she fell in love with storytelling. After living in NYC for a year to pursue film, Rea is happily back in Colorado enjoying the mountains and sunshine. One of her favorite themes to explore in her art and writing is the human spirit and human connection. When she’s not climbing or creating, Rea loves traveling to music festivals and going to Red Rocks shows. She might ask you for your birth time to check out your astrology chart too! (She is a Leo Sun, Scorpio Moon, Aquarius Rising). She loves to enjoy life and squeeze the very best of out of it.
Tagged: AdvicecitygraduatelifeLife HacksMillennialsmovingnew citypost gradpost grad life
OnColoradoSprings.com is a locally-owned and operated directory and information guide for Colorado Springs Colorado
Discover the best of Colorado Springs shopping, restaurants, night life, breweries, events, business, outdoors, fun, local life, real estate, transportation, jobs, and schools.
Looking for what to do in Colorado Springs? OnColoradoSprings.com has columnists, and bloggers to keep you up to date on the best of Colorado Springs, Colorado.