Home » Articles » An Ode to Lindy Hop & The Science Behind Swing

An Ode to Lindy Hop & The Science Behind Swing 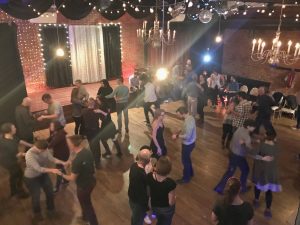 Colorado Springs is often recognized for the natural wonders of the area, but many often don’t realize that there is a lively swing dance scene hiding among the theatre, music, and arts culture.

Dancing is nothing new. Depictions of dancers were illustrated on cave walls like in the Magura caves of Bulgaria. Babies even intuitively move along with the music. Though certain groups prohibit it, almost every culture has an inclination to dance. Since I was lucky enough to grow up in the area, I’m thrilled that smaller cities like Colorado Springs are dipping their toes in this cultural gem.

I first learned about swing dancing 10 years ago in the final years of high school when a good friend invited me to tag along to the downtown VFW when they still had a weekly dance. I’ve been hooked ever since, and fortunately, there are always alternative locations to get your fix when the dedicated weekly leaders have to regrettably step aside to succumb to other obligations.

The first East Coast swing lessons I took were lively, quick, and insanely fun for being a simple 6-count dance. Now, East Coast’s granddaddy – the joyful and energetic Lindy Hop – is what lights me up on the floor.

What is Lindy Hop?

In 1927, Charles Lindbergh flew to Paris successfully and the headline that appeared on the newspaper that day read, “Lindy Hops The Atlantic.” This is where the name came from, but contrary to how it sounds, dancers do not hop in Lindy. It’s an 8-count rhythmic and smooth movement and has a pulse that your body gravitates along with.

Lindy Hop is the outcome of Afro-American-Euro Swing. Jazz is what Lindy is typically danced to and has origins in African and European music. The turns also came from European dances and the stance from Africa.

This social dance is based on improvisation and a partner connection where a communication of gentle movements occurs silently between one another. New music for swing caused the dance to evolve further, but its roots came from Harlem, specifically the Charleston.

It’s important to consider the context of what was taking place in Harlem in 1926. The Savoy Ballroom opened and was the first of its kind of luxury place to dance where the focus of dance and the evolution of swing began. It was the original place where the first and second generation swing dancers excelled and had a policy of no discrimination. The first night, 2,000 had to be turned away because the ballroom was bursting at its seams with passionate dancers. Though famous clientele would stop by, people were only concerned with whether or not they could dance.

Swing dancing has become even more popular over the years because it enables people to feel free, enjoy life, and to fully express themselves. For one, music is captivating in itself. Taking that a step further, physically connecting with music escalates that emotive feeling you get from simply listening. Moving to the beat creates an unmatched level of energy and excitement.

Research from the University of Oxford found that dancing inspires social bonding. Psychologists even refer to this as “self-other merging.” Moving along with the beat in a rhythmic form stimulates brain pathways that take down barriers between yourself and people you don’t know very well. This contributes to the connection and is just one reason why social dancing is so captivating.

Even the roles of leading and following depend on a complex force. The lead needs to be able to interpret how the follow is responding to the style and timing details in order to carry out the motions of the dance. The follow must carry out a great portion of the musicality to trust the movement of the dance along with the lead’s physical instructions.

As an example, Fred Astaire led Ginger Rogers to perform a close turn with his cheek on hers, and this sense of connection is rare. Dancers are able to have a conversation with their bodies that depend directly on physics, and in order to do so, they need to practice mastering the forces required.

When in close embrace, the hand and the hip connect the two dancers. The body and arms of the follow respond to the lead by exercising an equal and opposite force.

This force helps the follow to mirror the movements of the lead synchronously. If one dancer provides a cue, the two could be unbalanced, which breaks the symmetry but still allows them to move with one another.

The lead can instruct the follow to weaken the link, they simply need to communicate that the resistance should be lowered, and then the momentum can be moved. Once this occurs, the lead can signal a backward step and a different set of moves or a dip to conclude the movement.

The contact between the pair means that the lead controls whether the pair performs a slow sequence or an intense connection based on tension and quick response. The different ways these forces can be interpreted is why partner dancing allows you to achieve much more. Dancing by yourself means that gravity, friction, and your abilities control how much and what you can achieve on the floor.

Swing dancers mostly rely on hand-to-hand contact that depends on the elastic forces that come from the close connection. It’s easy to play with the tension and energy of the movement that the music helps to create.

Masters of Movement, Time, and Space

The addiction to dancing and the feeling of needing to dance are directly tied to aspects of human physiology. Dopamine, serotonin, and endorphins are neurotransmitters that improve moods through dancing due to the physical effort exerted.

Partner dancing also elevates the blood concentrations of oxytocin. While the science is not entirely clear, research is leaning towards the notion that in a group setting, oxytocin increases the feeling of belonging and trust. Since trust is elevated, this could be a reason why extreme Lindy Hop moves in the air can be performed seemingly effortlessly.

Air movements and remarkable bravery take place when the upward force is greater than that of gravity. Lindy hoppers are able to go into a state where style, speed, and balance are the only forces they care about. Adept dancers have a certain degree of power over the time and space that surrounds them.

The originators of Lindy Hop left more than just a popular art form behind. They were true ambassadors of the science of time and space that go into dancing. Anyone who wants to participate in this feeling of freedom and movement can take part, regardless of location. It’s rare to find another outlet where enjoyment, laughter, defeat, and elation are up for grabs for anyone who wants to feel the music.

As a tribute to Lindy Hop, East Coast, West Coast, and other swing dances, local venues are not shy to the magic of dance. A personal favorite of mine in the Springs is the Loft in Old Colorado City. With weekly Wednesday night swing dances, there’s never a shortage of fun, occasional live Big Band tunes, and lovely jazz.

Even newcomers who haven’t danced before can get out and groove a bit to the free lessons before the night of swing. There’s no excuse to miss out on the excitement – even just watching can ignite an internal spirit of moving and grooving that you’ll never want to lose.

Amanda Rose Barker
Amanda is a writer, artist, creator, and free spirit. She is a graduate of the University of Colorado at Colorado Springs and received her B.A. in English with an emphasis in Professional and Technical Writing. Amanda was born and raised in Colorado Springs but now resides in beautiful Manitou Springs with her family. Since graduation, she’s been busy raising her daughter and working as a government contracted technical writer, ghostwriter, and digital content marketer. Following her passion led her to follow in her parents’ and grandparents’ footsteps as business owners and founders of the treasured Woodland Park Donut Mill. To achieve the freedom she desired, she and a colleague began their own marketing agency, Forrest & Rose (forrestandrose.com), to further leverage her talent. As the director of content and copywriter, she is able to put her heart, attentiveness, and passion directly into her client’s work.
Tagged: Colorado springs swing dancingdance scienceLindy hopswing dance Colorado
OnColoradoSprings.com is a locally-owned and operated directory and information guide for Colorado Springs Colorado
Discover the best of Colorado Springs shopping, restaurants, night life, breweries, events, business, outdoors, fun, local life, real estate, transportation, jobs, and schools.
Looking for what to do in Colorado Springs? OnColoradoSprings.com has columnists, and bloggers to keep you up to date on the best of Colorado Springs, Colorado.