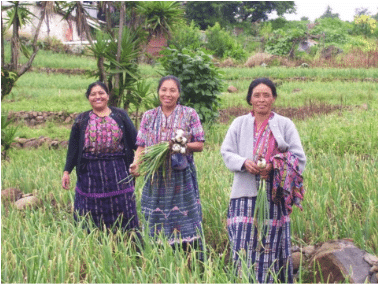 In Guatemala a 36-year guerrilla war which formally ended in 1996 and ongoing drug cartel and gang violence has left over 200,000 people dead and created an estimated 1 million refugees in Guatemala.

The country struggles with poverty, infant, child, and maternal mortality, malnutrition, proper sanitation, and contraceptive awareness and use. The female literacy rate is surprisingly only 76%. More than half of the population is below the national poverty line, and 23% of the population lives in extreme poverty. Poverty among indigenous groups, which make up more than 40% of the population, averages 79%, with 40% of the indigenous population living in extreme poverty. Nearly one-half of Guatemala’s children under age five are chronically malnourished, one of the highest malnutrition rates in the world. These areas have also been ravaged by climate change, natural disasters, droughts, flooding, and mud slides.

Friendship Bridge, a microfinance company focuses on helping these poverty stricken communities from the inside out by empowering women to build a better life for themselves and their families through small loans to start and grown their own sustainable businesses, practical education and training, and health services.

Friendship Bridge believes in a hand up, not a hand out. Your donation isn’t charity, but rather supports long-term, sustainable solutions to poverty. You’re giving a gift of a better life and empowerment for women in Guatemala!

Find out more at https://www.friendshipbridge.org/

Heather Long
Heather is a creative writing wizard, travel guru, Elite Yelper, personal blogger, and Spartan Sprint race finisher!  After living most of her life in rural New York State, Heather quit her career and moved cross-country to Denver looking for a new and urban lifestyle.  Although, she has traveled to over 20 foreign countries, she had never before lived in a city and her last home was outside a Hamlet with only one traffic light.  Heather now exists as a well-adapted LODO Denverite who considers herself an area expert.  Moving can spin you around and spit you out, but Heather's journey proves the joy of waking up with a new city as your playground and opening up a box of discovery every day.  She has overcome setbacks, dealt with being an out-of-towner and urbanized into an individual who can easily maneuver living in Denver with thoughtfulness and skill.
Tagged: charitydenver charityFriendship Bridgeguatemala
OnColoradoSprings.com is a locally-owned and operated directory and information guide for Colorado Springs Colorado
Discover the best of Colorado Springs shopping, restaurants, night life, breweries, events, business, outdoors, fun, local life, real estate, transportation, jobs, and schools.
Looking for what to do in Colorado Springs? OnColoradoSprings.com has columnists, and bloggers to keep you up to date on the best of Colorado Springs, Colorado.